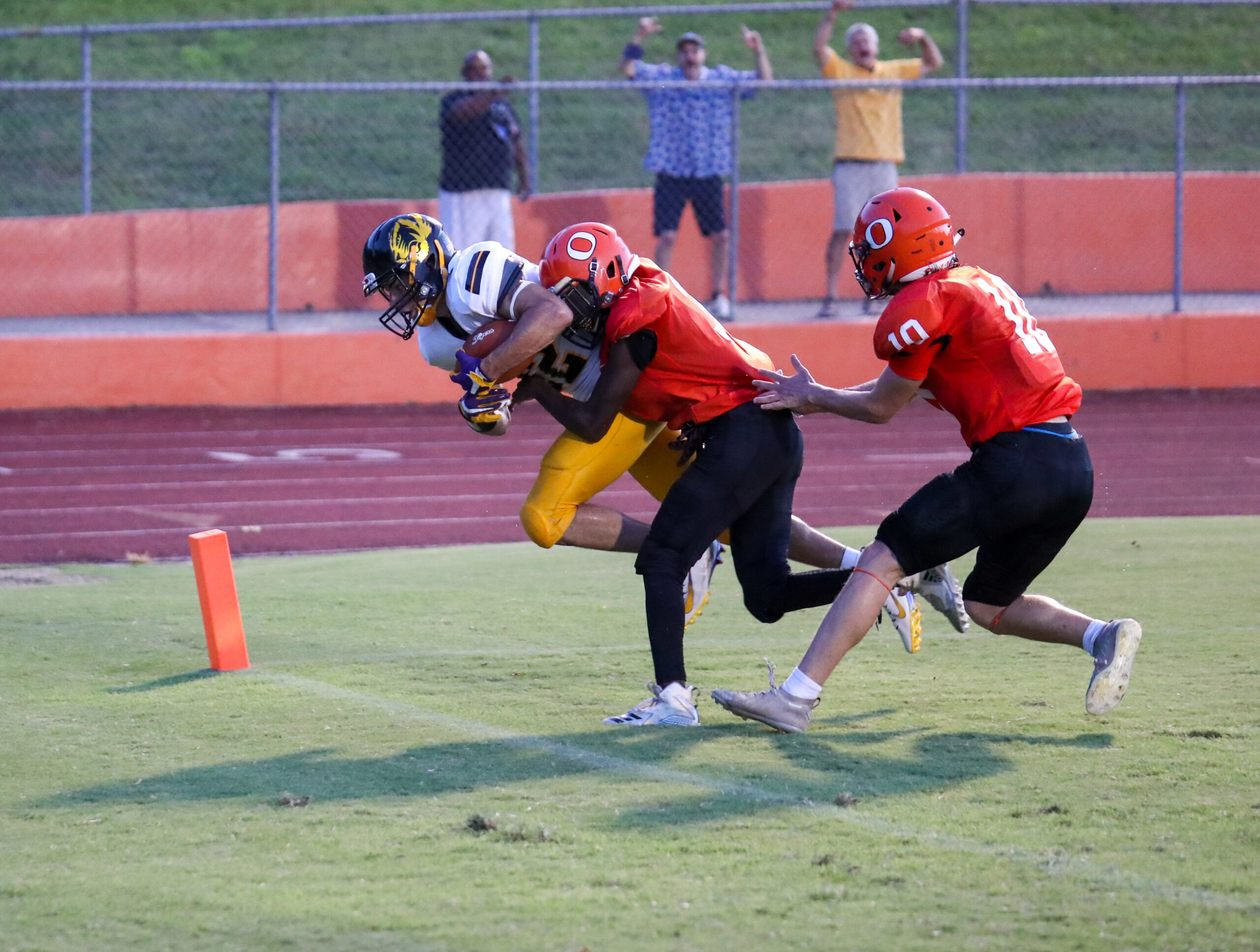 Chapel Hill’s first win at Auman Stadium since 2004 didn’t end in with comfort, where the coaches played out the string to run out the clock before a celebratory and comfortable ride back to the southern end of the Orange County.

Rather, it was filled with every incredulous turn, strange play calling, false finishes and gutsy gambles that make the Chapel Hill-Orange rivalry so zany, unpredictable and downright fun.

Anyone who knows this rivalry would expect nothing less.

In front of a spirited group of Chapel Hill fans that included a large student section waving team flags, the Tigers (1-0) held on to defeat Orange (0-2) 27-21 on Friday night. Not to be outdone, the Orange fans turned out on Hawaii night where the expected gear. Even Orange trainer Emily Gaddy showed up in a Hawaiian lay.

In April, Chapel Hill kicker Nolan Westroom kicked a 40-yard field goal as time expired to lift Chapel Hill past Orange 24-22 in the regular season finale at Culton-Peerman Stadium. It preserved a share of the Big 8 Conference championship for the Tigers. On Friday night, it appeared that Orange was brewing for yet another dramatic comeback of its own. On a night where the humidity was 85%, the game was constantly halted because of players cramping up. It left the Tigers struggling to find enough capable bodies to hold onto a 27-14 lead it had built with 4:33 remaining. Orange had two chances to score the game-tying touchdown in the final three minutes of regulation. Both drives ended in turnovers.

Chapel Hill senior quarterback Caleb Kelly threw for two touchdowns, including one on the final play of the first half that vaulted the Tigers into the lead permanently. Kelly finished 9-of-18 for 140 yards and two touchdowns.

“This hurts as much as April,” said Orange Coach Van Smith. “Just too many mistakes. Golly, that’s the best quarterback we’ve seen in a long time. If we see another one better than that this year, it’s going to be freakin’ scary, because he’s dang good”

If nothing else, the game was a dramatic improvement for the Orange offense, which labored through a poor season-opener at South Granville last week. Against the Vikings, the Panthers registered just 16 yards total offense and two first downs.

Orange’s Jared Weaver blocked a 37-yard field goal attempt by Chapel Hill kicker Taran Coyne Smith. That led to a 13-play, 71-yard drive where Orange converted four third-downs. It ended when senior running back Omarion Lewis broke two tackles to score on an 11-yard scamper into the end zone. Kicker Darius Satterfield took a snap from long snapper Jake Wimsatt on the extra point and ran it in to put Orange ahead 8-0.

Chapel Hill would score on its next three possessions. It started when senior Elijah Ayankoya returned the ensuing kickoff back 86 yards for a touchdown. Weaver blocked the extra point to keep Orange ahead 8-6.

The Tigers got the ball back with 1:06 remaining in the first half. Kelly threw to senior Josh Campos for a 41-yard pass to penetrate the Orange end zone. After three straight incompletions, Chapel Hill faced a 4th-and-10. Marsh eschewed another 40-yard field goal attempt, a decision that paid off handsomely. Kelly found Campos in the back corner of the end zone for a gorgeous 20-yard touchdown pass on the final play of the first half.

On the opening kickoff of the second half, Chapel Hill’s Tai Kirk recovered a fumble by Orange’s returner at the Panther 29-yard line. Kelly got into the red zone with an eleven-yard run, and later flipped the ball on a tap pass to wide receiver Anthony Muldrow, who curved up the middle of the line for a 5-yard touchdown. Drew Allen added the 2-point run as Chapel Hill increased its lead to 20-8.

“We couldn’t have had a more disastrous end to the first half and beginning to the second half,” Smith said. “I thought we were doing pretty well offensively in the first half before the kickoff returner.” It

Orange’s sophomore running back Nate Sorrells took over on the next drive. He started by returning the kickoff 31 yards. After Lewis converted a 3rd-and-2, Sorrells bolted around left end for a 35-yard run. Hecht would score his first touchdown of the season on a fullback dive to reduce Chapel Hill’s lead to 20-14.

Jabari Albright recovered a fumble late in the third quarter to start a drive at the Chapel Hill 49-yard line. The drive stalled out after consecutive penalties pushed Orange back to the 50-yard line.

The game turned on Orange’s opening possession of the fourth quarter. The Panthers were set to punt on a 4th-and-10 from its own 35-yard line. At this point, Orange called for a fake punt, where Hecht was stopped by Becket Yates and Palmer Blanchard after a 2-yard gain, which turned the ball over on downs to Chapel Hill deep in Orange territory.

Chapel Hill needed only six plays to score what turned out to be the game-winning touchdown. After Kelly started the drive with a 12-yard gain, Allen scored on a 1-yard plunge with 4:33 remaining.

Trailing 27-14, Orange needed something fast and they got it. Quarterback Wynston Brown found Sorrells for a nine-yard gain, and picked up 15 more yards after an unsportsmanlike conduct penalty. Brown floated a screen pass to Sorrells for a 35-yard touchdown pass, scoring just 40 seconds after Kelly touchdown.

Orange forced Chapel Hill into its only 3-and-out of the game after Kelly was pressured into a incompletion on 3rd-and-11 by linebackers Connor Ray and Jackson Wood. Orange took over at its own 26-yard line, but on 3rd-and-9, Brown had the ball knocked free and recovered by Tiger defensive lineman Edward Bassett.

It appeared that the Tigers would simply run out the clock, but this wild night wasn’t going to end that meekly. Running back Cayden Forbes, who finished with 102 yards, fumbled at the Orange 16-yard line with 1:02 remaining. Orange’s Kameron Harshaw got the ball back and the Panthers incredibly got yet another chance to take the lead.

But there was no miracle on Friday night.

Brown marched the Panthers into Chapel Hill territory after a 11-yard pass to Sorrells, followed by another personal foul penalty. Chapel Hill’s Jeremy Breeze ended the struggle with an interception at the 30-yard line.

Orange will travel to Burlington to face Cummings next Friday.