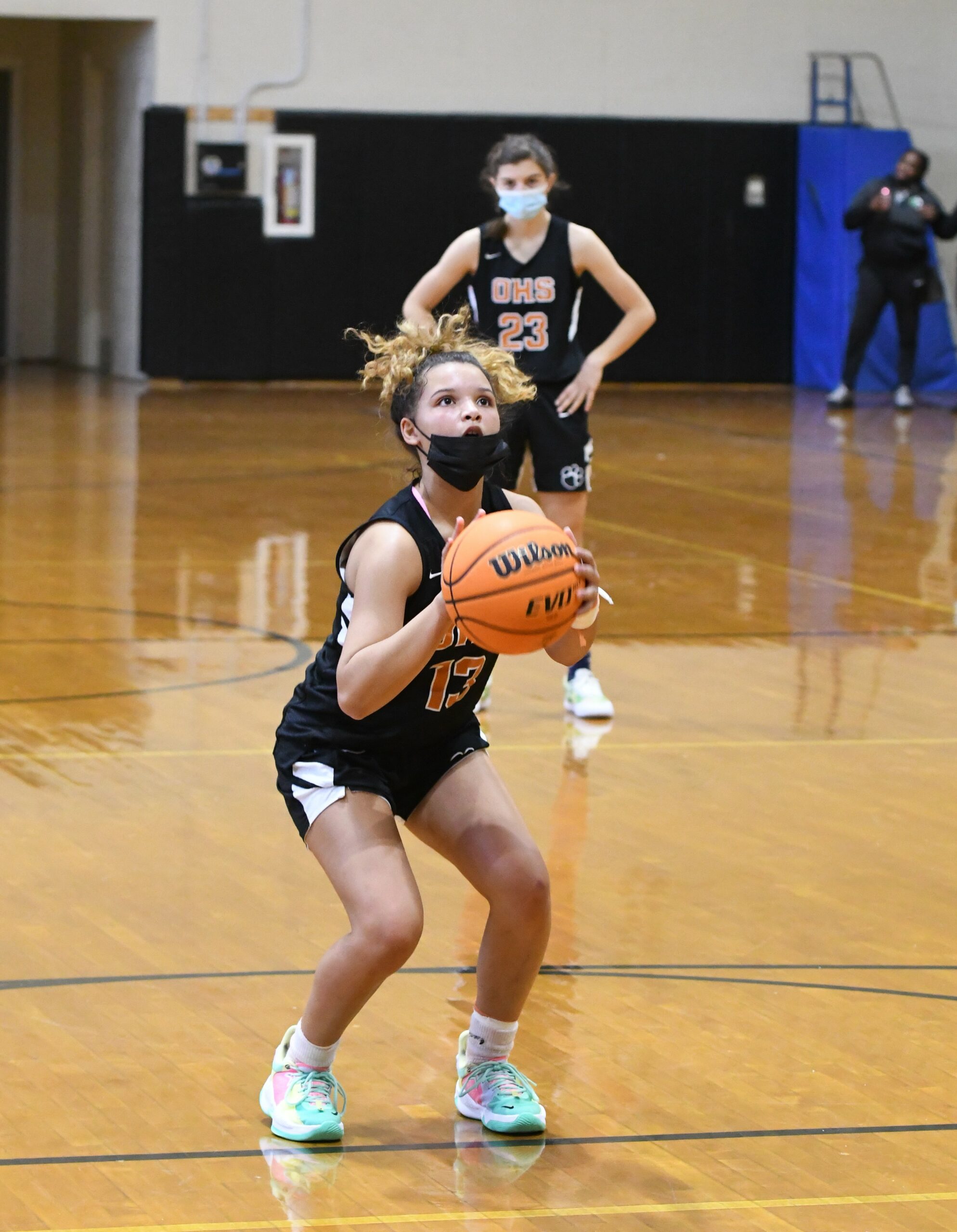 GIBSONVILLE–Playing the first game after Christmas in a holiday invitational can be a challenge.

Even the most seasoned squads can sometimes experience a holiday hangover after all the Christmas shopping, family get-togethers, days off and countless meals have faded over time and it comes time to play some basketball.

For Orange, that wasn’t the case in the opening round of the Eastern Guilford Basketball Showcase in Gibsonville on Monday. The Lady Panthers faced Reidsville in the first of six games on the Monday slate. While things grew tight in the second half, there was no holiday hangover to be found for Orange.

Instead, they greeted the early wakeup call with open arms. The players got up early for a shoot around in the auxiliary gymnasium at Eastern Guilford High School. This came a week after a pre-Christmas workout at the Cedar Grove Ruritan Club in order to keep their legs fresh.

“To be honest with you, I kinda liked it,” Orange women’s coach B.J. Condron said of playing the 11AM game. “We worked out for about an hour to get the rust off. The facilities here are so nice here, it was good to get here early. When you play the first game, there’s definitely a concern. We were kind of the first team to wake up.”

Orange led 42-26 with 4:50 remaining in the third quarter, but the Rams’ Kieva Perkins sparked a 14-2 run with a banked-in 3-pointer. Reidville’s Gracious Wise completed a 3-point play to cut Orange’s lead to 44-40 with 57 seconds remaining in the third quarter. The Rams had a chance to cut Orange’s lead down to a single-basket, but were called for a 3-second violation. Subsequently, Jada Reed found Orange’s Samantha George on a diagonal pass, which led to a foul. George sank both free throws, followed by a steal and lay-in by Harris. From that point forward, the Lady Panthers finished the game on a 25-5 run.

Kieva Perkins led the Rams (2-2) with 21 points. Wise added 12 points, but the Rams scored only five points in the fourth quarter.

Perkins sank a running one-hander to cut Orange’s lead to 50-42, but the Rams didn’t score a field goal in the final 5:58. Orange freshman Evelyn George, who finished with ten points, sank a key 15-foot jumper on the next possession that jump started a run and put the game away. It was the fourth time this year that George has finished in double figures.

“Evelyn is putting herself in a position to get more time,” Condron said. “She’s one of our hardest workers and she’s shown that in practice time-and-time again and it’s really starting to pay off.”

The game also marked the return of All-Conference center Erin Jordan-Cornell, who last played against East Chapel Hill on November 30. Jordan-Cornell suffered a leg injury against the Wildcats, which caused her to miss seven games.

Against Reidsville, Jordan-Cornell started but found herself in foul trouble all day. She was limited to seven points and four rebounds.

“I think she did a good job,” Condron said. “Just getting her back in the grove of things, it was good to get her back out there.”

After the two teams finished the first quarter tied 16-16, the Lady Panthers held Reidsville to two field goals in the second quarter. Harris scored eight of her 22 points in the second frame, including two breakaway layups that pushed Orange’s lead briefly into double-digits.

This year, the Eastern Guilford Basketball Showcase isn’t a tournament, but simply three games between nonconfernece opponents across three days. The Lady Panthers, who finished 2nd in the Granville Central Holiday Tournament in 2019, will face Eastern Guilford on Tuesday night at 7:30. Orange will wrap up the event against Northeast Guilford on Wednesday morning at 11AM.