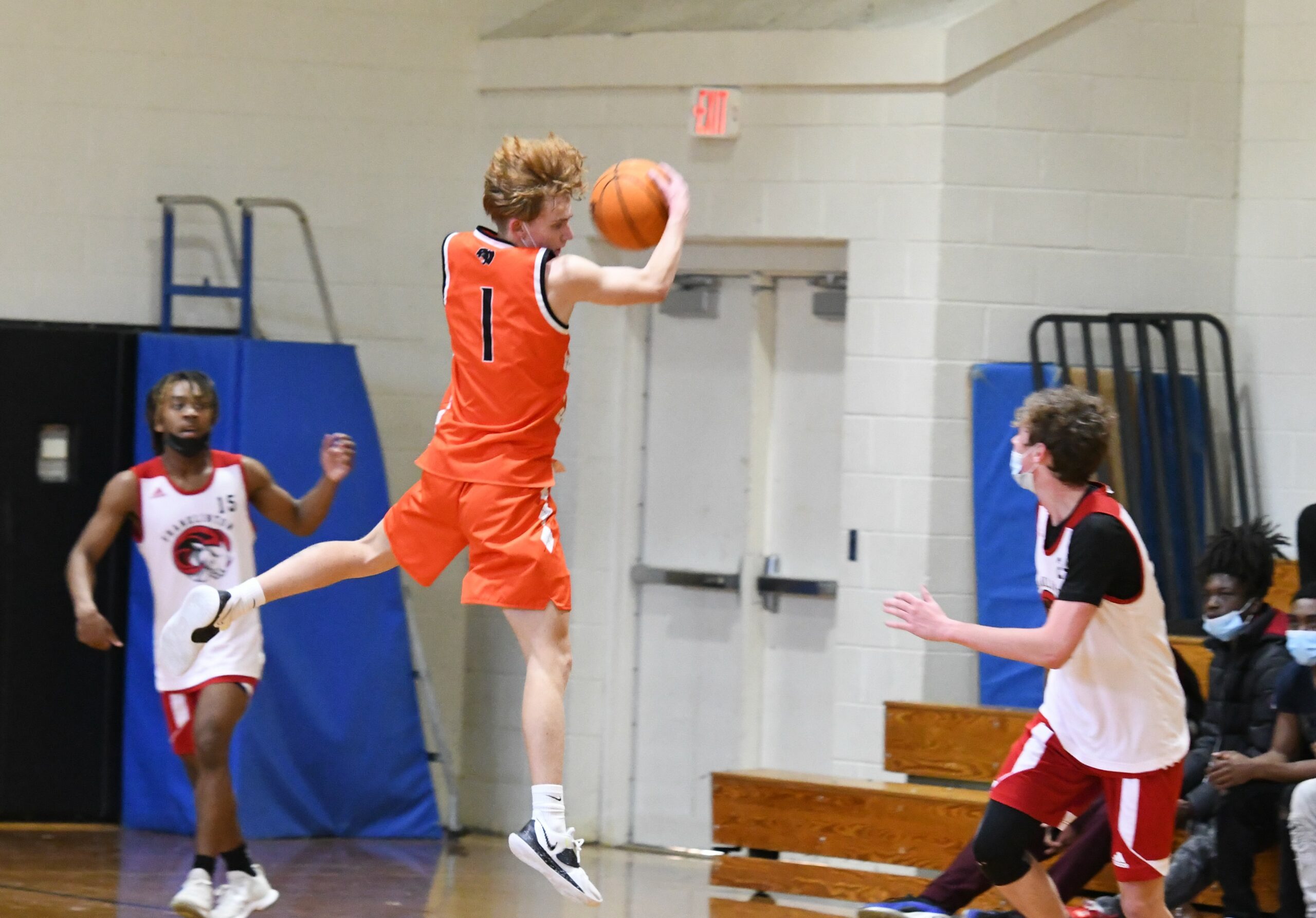 CREEDMOOR–There were moments of desperation that turned into outright panic, a 7-point lead nearly blown in the final minute and two occasions were Orange somehow found itself on defense with the game on the line.

Yet it was still gloriously better than Orange’s last journey to South Granville in 2019.

And, unlike that horrendous previous trip, Orange came away victorious, even if the path to victory was filled with every unexpected bump, bounce, flip and stumble one could imagine along the way.

The Panthers defeated Rolesville 73-70 in the opening game of the Navy Bracket of the South Granville Holiday Invitational at South Granville High School on Monday afternoon. Orange advances to the semifinals to face Cary on Wednesday at 4. The Imps defeated J.F. Webb 66-53 on Monday night.

With two low-post players out of the lineup, Orange coach Darryl Britt called up junior Amare Morgan from the junior varsity squad over Christmas week. Morgan started his first varsity game and had 15 points, including three 3-pointers. Senior Jerec Thompson, who missed three games last week while in quarantine, led all scorers with 33 points, including some crucial free throws late.

It was the third time in five games that Thompson had scored 30 points or more for Orange (3-7).

Orange won for the first time in the South Granville Holiday Invitational. In 2019, the Panthers came into the tournament 7-1 with consecutive wins over East Chapel Hill and defending 3A State Champion Walter Williams. Yet Orange limped away from Creedmoor with losses to Sanderson, Franklinton and Green Hope.

It was the first time in Coach Derryl Britt’s four-year stint that the Panthers won the opening game of any tournament. In 2018, the Panthers finished fifth in the Eastern Guilford Holiday Invitational, but dropped the opener to Northeast Guilford in Gibsonville.

Orange led 69-62 with 1:36 remaining after Thompson rebounded his own miss and stuck it back in from point blank range. Shortly afterwards, Rolesville guard Jayden Michael was fouled by Thompson, which was followed by a technical foul on an Orange guard. Michael hit only one of the subsequent four foul shots.

On the ensuing Rams possession, Michael found himself again at the foul line after a foul against Orange’s Kaleb Barnhardt. Michael, which had two free throws rim out on his previous trip, had another limp out before sinking another to cut Orange’s lead to 69-64.

After a Thompson miss, Isaac Tatum hit a running one-hander, then poked the ball away from Orange’s J.J. Thompson, slid 15-feet across the slick Columbia blue floor on a humid December afternoon, somehow avoided a travel and called timeout. With a chance to tie with 48 seconds remaining, Rolesville’s Lucas Seubert missed a 3-pointer, which was rebounded by Jerec Thompson. After Barnhardt missed a lay-in, Jerec Thompson was fouled and sank two free throws.

With Orange leading 71-66, Michael hit a three-pointer, then poked the ball away from Thompson for a held-ball, which gave it right back to the Rams. With a chance to tie, Thompson poked the ball out of Michael’s hand, dove on the ball and called timeout.

Orange freshman Freddie Sneed hit a free throw with 2.9 seconds remaining, and a desperation heave from midcoast by Tatum missed the goal.

In the first quarter, Rolesville led 15-9 after two free throws with 49 seconds remaining by Chadwright Wright. Then Orange reeled off 18 consecutive points, started with two free throws from Morgan, followed by a Thompson 3-pointer off an assist from Darius Corbett that beat the quarter buzzer to cut the Rams’ lead to 15-14.

Corbett went coast-to-coast on a lay-in to open the second quarter to put Orange ahead 16-15, a lead they would remarkably not lose for the rest of the game. Thompson added another 3-pointer off a shot fake, then buried another, followed by a 3-pointer from Ryan Moss to increase the Orange advantage to 25-15. Joshua Jackson scored off a lay-in on transition.

The Rams quickly narrowed its deficit to single digits behind a 3-pointer from Lucas Seubert and two field goals from Chadwick Wright, reducing Orange’s lead to 34-31 at the break.