Cedar Ridge’s state championship worth the wait for Coach Cunningham 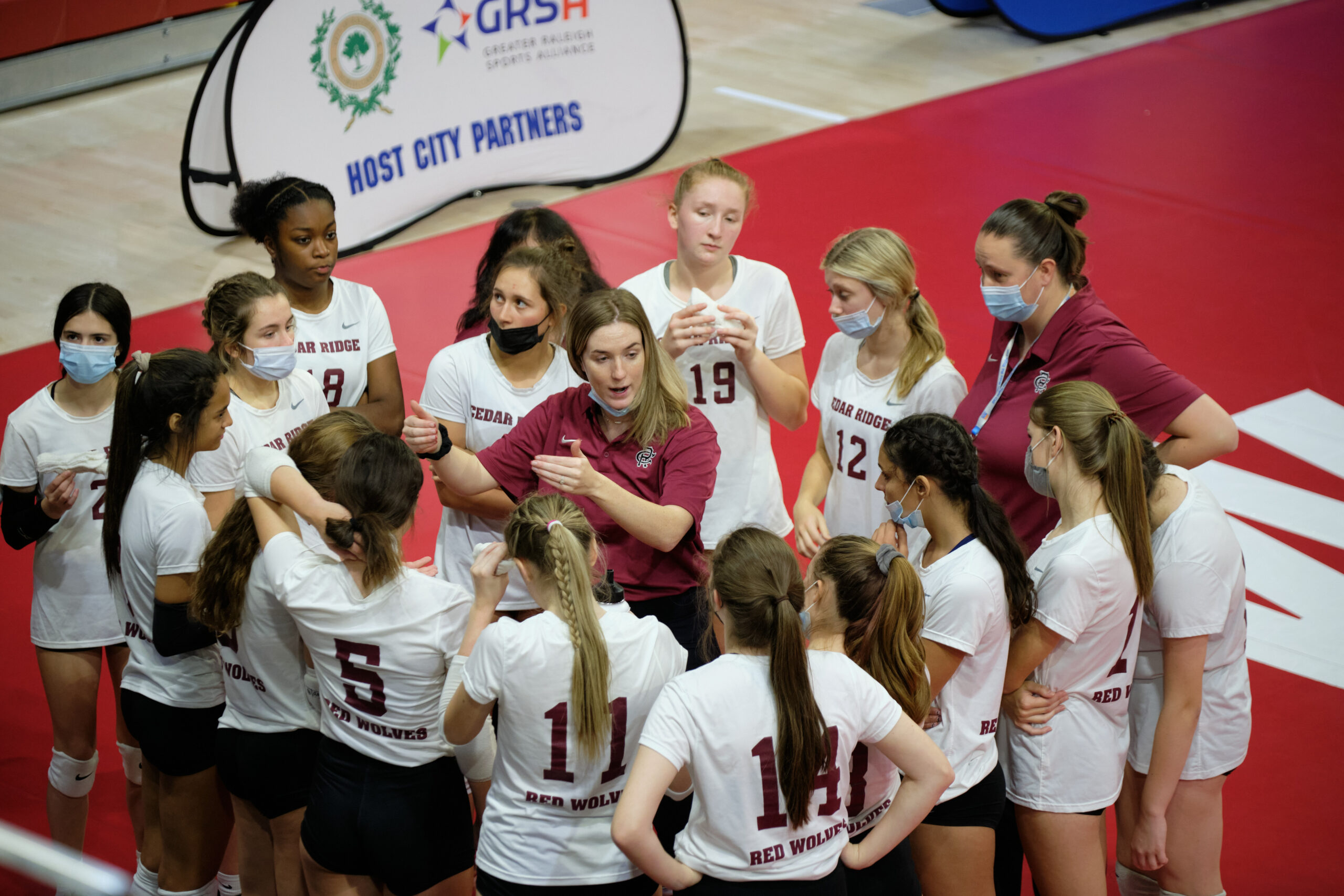 The consensus among Cedar Ridge’s volleyball players is that it was junior setter Julie Altieri who first called head coach Fiona Cummingham “Mom.”

Though she is expecting with her first child, it’s a moniker that Cunningham bristles at. Her players, however, have embraced it.

“She is our second mom,” said Cedar Ridge junior Cameron Lloyd after the Red Wolves captured the 3A State Championship on Saturday over North Iredell in Reynolds Coliseum. “She has made us better in so many ways. Not even just as players, but as people. She’s great.”

Cunningham, whose face turned slightly red as Lloyd made her comments in the postgame press conference, muttered “We’ll just leave it at that.”

“She’s taught us so much that’s we’re going to be able to continue using in life,” said junior Cameron Lanier. “Whether we decide to play in college or not, in everyday general life she’s has taught so much.”

The fact that Cunningham was the coach to lead the Red Wolves’ first run to a volleyball state championship comes with a rich irony. The first great moment for Lloyd, Lanier and Altieri at Cedar Ridge came when they were freshmen and defeated then-defending 3A State Champion Chapel Hill on September 10, 2019. That season, Cunningham was a volunteer assistant for Chapel Hill, but she missed the game that night because she had to work late at UNC Hospitals, where she serves as a Clinical Research Coordinator.

It was Chapel Hill’s only loss of the season. She was present for the rematch a month later, where the Tigers were victorious.

“I saw that night how phenomenally talented Cedar Ridge was,” Cunningham said the following summer, shortly after she accepted the job after previous head coach Anna Seethaler left for Costa Rica. “I got to know they were going to push. From the get-go, I knew that Cedar Ridge was a good team before I considered coaching there.”

Chances are if you had told Cunningham’s mentors in 2012 that she would be holding a state championship trophy as a coach within a decade, they wouldn’t have been surprised. Coaching is embedded in her blood.

A native of Syracuse, New York, Cunningham’s father was a lifelong hockey coach. Cunningham and both of her sisters grew up playing hockey at Cazenovia, New York, where her father ran learn-to-play programs and coached various teams.

Her sister, Maggie, was the original women’s lacrosse coach at Carrboro High. Maggie also played on UNC’s women’s club hockey team, which had home games at the Orange County SportsPlex. That was Fiona’s first brush with Hillsborough, but it wasn’t for volleyball. It was for hockey.

Fiona, who learned to skate at the age of 2, played on a team called TPH based in Atlanta, Nashville, and Huntsville, AL. That meant going to the SportsPlex at 5:00 in the morning because it was the best, and cheapest, time the ice was available for practice. She would finish middle school classes in Chapel Hill, then take off on Fridays for games in the Deep South, which started to wear thin by age 12.

“That was about the time I decided it was time for another sport,” Cunningham said. “We faced teams from Canada. It made the travel schedule for club volleyball seem much easier.”

Tristy Bittikofer, who was Cunningham’s travel coach, used to joke that Cunningham was the “assistant, assistant coach as a player” when she was 17 because she was so organized. On the floor, Cunningham always knew where the players were supposed to be positioned and was effective in communicating with players.

“Tristy told me I would be a good coach,” Cunningham said. “I find coaching to be the better side of the sport. I find it to be even more enjoyable than playing, which is saying a lot because I loved playing.”

“I was so lucky to walk into a program where the expectations were ingrained in the culture,” Cunningham said. “Nobody ever had to sit there and tell you that you’re expected to give 100% total effort. Our practices were harder than a lot of our games.”

There were two times where Cunningham reached the 3A Eastern Regional final as a player. On both occasions, the Tigers lost to Cardinal Gibbons in the final. Her senior year, the Tigers finally defeated the Crusaders in the regular season.

“I cried after that game,” Cunningham said.

Cunningham committed to Wofford College, but burst the bursa in her right knee within days of preseason practice starting. The recovery would take the entire season. She transferred to UNC Asheville, where she played for two years.

“It was best to go to a slightly cheaper school,” Cunningham said.

As she recovered from her knee injury, Cunningham served as a student manager for the Bulldogs. She now calls it her “PCL years.” It started her path to coaching.

“Going into college, I knew I wanted to coach,” Cunningham said. “I got so many opportunities while not playing as a part of that program that were just invaluable.”

Heading into Wofford, Cunningham’s intention was to become a graduate assistant and coach in college. As she continued at UNC Asheville, she gained a preference to prep volleyball and working with younger age groups.

“The time in which I was not playing I was able to be hands-on with the coaching staff,” Cunningham said. “I was really involved with decision making and working with players and learning the logistics of running a college program. That was invaluable experience to me knowing I wanted to coach.”

After just her second year at Cedar Ridge, Cunningham has already won two Conference Championships, the Central Conference Tournament, an Eastern Regional championship with an overall record of 41-3.

All of Cedar Ridge’s regular rotation players are slated to return next year.

As many of her players are set for travel season this winter, Cunningham hopes they will enjoy the moment of what they accomplished this season and the exclusive company they just joined.

“I’m really grateful for Cedar Ridge to give me an opportunity as such a young coach,” Cunningham said after Saturday’s state championship win. “I don’t hold any negative notions towards my playing career. It was one of the best memories of my life, regardless of whether we got a state title or not. My coaching career is entirely different. I was to help as many players as possible reach whatever stage they want to reach. These girls made it clear they wanted to reach the state championship.”