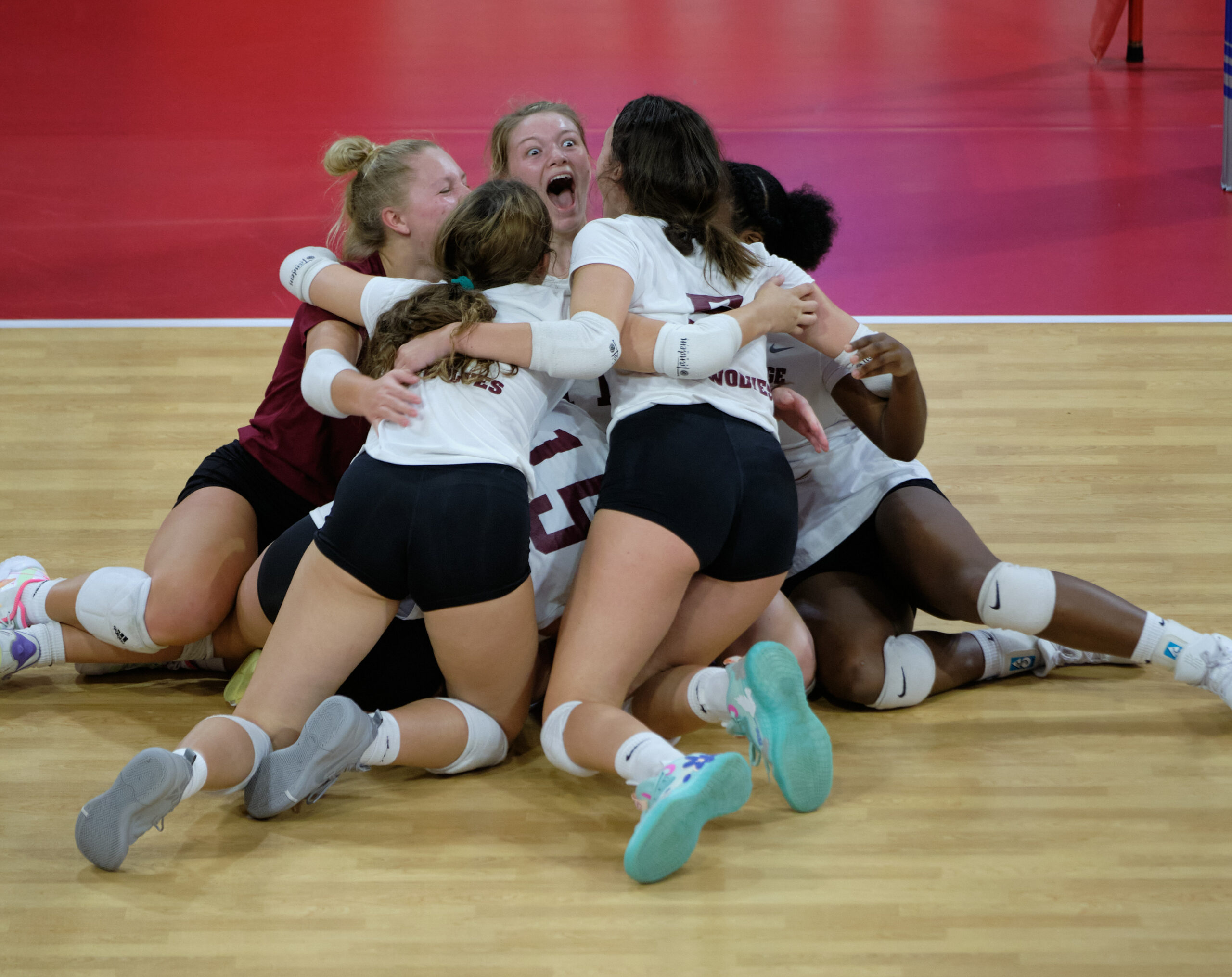 Of course, It wasn’t just destiny that carried Cedar Ridge to its first volleyball state championship on Saturday. Since August, there’s been gallons of sweat spilled by the Red Wolves from Hillsborough to Greenville to Burlington and, ultimately, Reynolds Coliseum in Raleigh. Bodies hit the floor hundreds of times for digs. There were lots of ice bags worn and tossed away after games. A corps of juniors who started as freshmen two years ago honed their skills under head coach Fiona Cunnigham.

Through an undefeated run through the toughest conference in 3A volleyball, the Red Wolves still managed to laugh a lot along the way.

The Red Wolves (31-2) defeated North Iredell 3-1 to win the 3A State Championship on Saturday at Reynolds Coliseum at Valvano Arena. Cedar Ridge captured its first state volleyball championship on scores of 25-20, 19-25, 25-22 and 25-16.

Through six matches in the state tournament, the Red Wolves dropped only one set, the lowest amount of any of the four champions crowned on Saturday.

Junior Cameron Lloyd was named the game’s Most Valuable Player after she tallied 14 kills and 12 digs. Lloyd, who surpassed the 500-kill plateau against Person on August 31, had double-digit kills in all eight of the Red Wolves postseason games (including two games in the Central Carolina Conference tournament).

After being an assistant on Chapel Hill’s 2018 3A State Championship squad, Cunningham claimed her first state title as a head coach.

“I’m really proud of our girls for sticking to our game plan,” Cunningham said. “Giving the school and the community something to rally around has been really huge for us. We just had a parent walk up to us in the hallway that has a freshman son. I don’t know if she’s ever watched a volleyball match before, but she told us how much this meant to them.”

Hundreds of Cedar Ridge fans journeyed from Hillsborough and surrounding areas, filling up three sections of the upper bowl of the renovated Reynolds Coliseum, which lists 5,600 as its official capacity. North Iredell fans, some draped in red t-shirts reading “The Road to the State Championship Runs Through Olin,” roared with every Raider point.

Cedar Ridge’s icy poise was tested from the outset when the Raiders reeled off the game’s opening five points with junior Ailena Mykins serving. The Red Wolves took control when sophomore Graylinn Serge took over service with Iredell leading 9-7. Serge cooked up an ace, starting a Cedar Ridge spree of nine consecutive points. Serge had two aces during the run, which also included kills by Melissa Benkowitz, Julie Altieri, Addie Reid and Lloyd. By the time Eliza Jenkins ended the rally, the Red Wolves led 16-10.

North Iredell freshman Kayden Flowers sparked a comeback by serving five straight points to cut Cedar Ridge’s lead to 22-20, but Benkowitz came up with a huge finish off an assist from Julie Altieri. After another kill by Lloyd, Lanier ignored the yelling from the North Iredell fans to serve Cedar Ridge out of the set following a Raider error.

Cedar Ridge’s streak of 31 consecutive sets came to an end in the 2nd, though it appeared the Red Wolves were in position to make to extend it. Cedar Ridge led 15-13 before the Raiders reeled off eight of the next ten points. North Iredell junior Emma Norris, who finished with a team-high eleven kills, made a block on an Benkowitz attack to put the Raiders ahead 22-18. Madeline Sigmon spiked home a winner that tagged the right sideline to force set point, leading to a Norris spike to even the match.

“We didn’t play our game,” Lloyd said about the second set. “We lost our energy. They were getting into our head and we needed to turn things around and bring the energy back to our side. We had a really big fan base.”

The third set, which had 14 ties, essentially decided the match. It was where Lanier shined the brightest. The Raiders built a 5-2 lead early, which was quickly erased when Lanier had consecutive kills. North Iredell grabbed a 19-17 lead after back-to-back kills by junior Emily Campbell, which led to Cunningham calling timeout. The Red Wolves responded with a kill by Addie Reid. An illegal hit by the Raiders evened the set at 19-19.

The Raiders took the lead again after a Red Wolf return went long, but it was erased after a kill by Reid to even the set again 20-20. The Raiders reassumed command after a kill by Madeline Sigmon. A spike by Norris was blocked by Reid, but it went out over the end line to put Iredell ahead 22-20.

That led to the turning point.

Cedar Ridge scored the final five points of the set. After an Iredell serve went into the net, Lanier blocked a Morris attack to tie it at 22-22. Then Lanier took another Altieri feed for a kill to go ahead 23-22. An overhead return by Sigmon went into the nylon, which led to a set point winner by Altieri to send the Red Wolves contingent into a frenzy.

“I came in and I knew we had to push those next couple of points,” Lanier said. “The girls have definitely come back without me getting the blocks, but I know I’m a big part of the team and I just had to work 100% to get those points. And I did.”

The white knuckle intensity of the third set yielded to a Cedar Ridge coronation in the fourth, where the Red Wolves never trailed, jumping out to an a 11-5 lead. Young may have made the best individual play of the match when she dove headlong for a spike by Norris that had plenty of power behind it. So much, in fact, that it rebounded off the sprawling Young’s fist at the attack line, sailed over the net and landed five feet inside the Raiders’ end of the floor to put the Red Wolves ahead 15-8 to spark a deafening roar from the Cedar Ridge fans.

Once Young’s stunning return landed untouched, the reserves along the Iredell bench began wearing faces of resignation. From that point forward, it was only a matter of time.

“We just saw the light at the end of the tunnel,” Lloyd said. “It’s indescribable. We could not give up and had to keep pushing because if we just let them in a little bit, they would have come back and taken it.”

Fittingly, it was Lloyd that scored match point off a feed from Altieri. The all-time kills leader in Cedar Ridge history taking the ball from its all-time assist leader to put an end to the most successful season ever in Hillsborough volleyball.

Cedar Ridge’s mission of 2021 was barely accomplished before talk of a repeat among some Cedar Ridge players started postgame. None of the Red Wolves’ three seniors played on Saturday.

Or perhaps it all started years ago when Lloyd, Altieri, Anaya Carter, Grace Young and Lauren Cecil played together as elementary school children in the White Cross Recreation Center. That’s where the road to playing in front of over 1,000 fans in Raleigh for a state championship started.

After Saturday, this group of young women has forever left its mark on Cedar Ridge volleyball and Hillsborough as a whole. They will forever be remembered as Destiny’s Darlings.