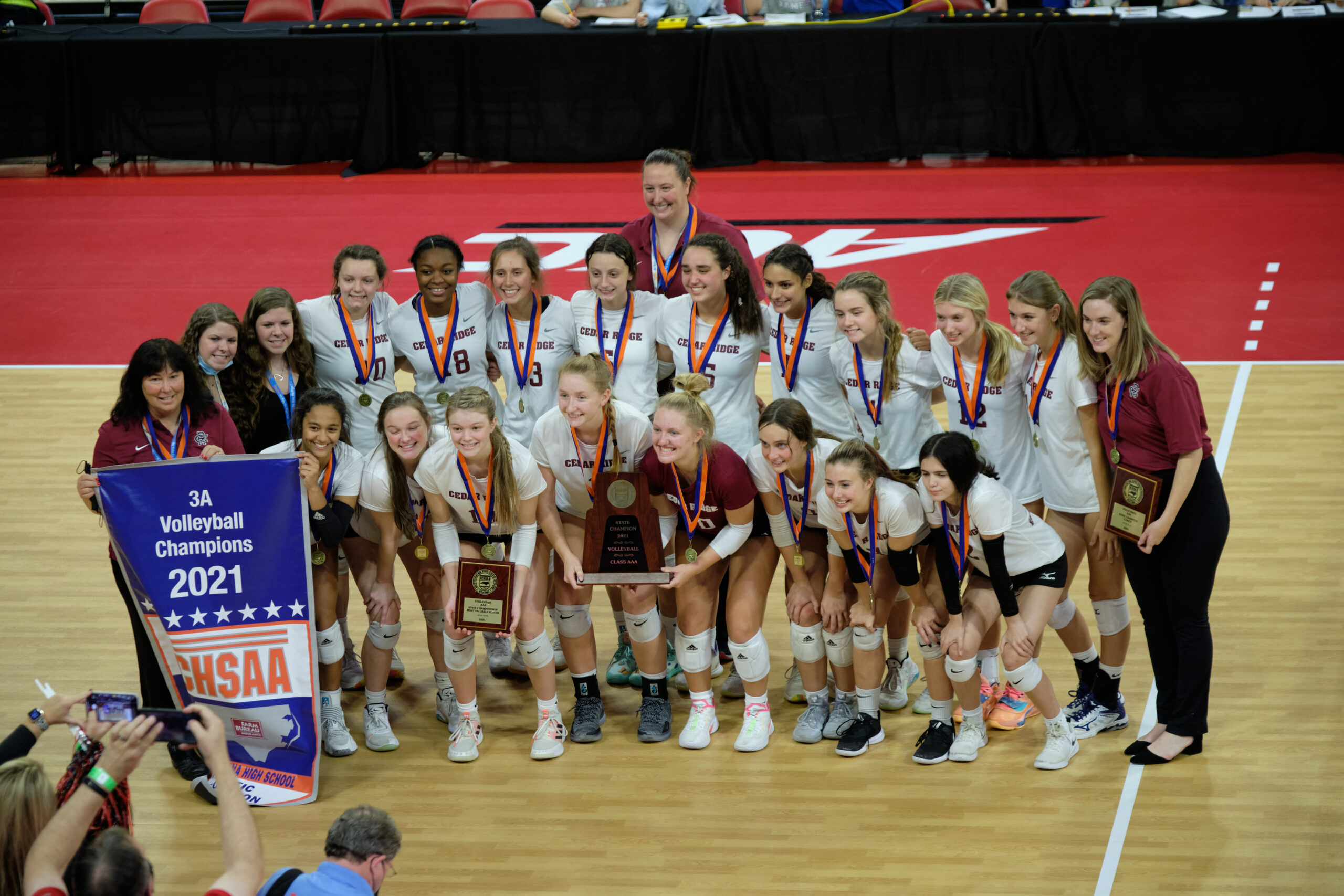 There were good omens in Raleigh on the coolest weekend of the fall at N.C. State University.

The last time I had parked in an area near Reynolds Coliseum on the N.C. State campus, it was June 2017. As I got out of my car on Saturday, instinctively my head turned towards centerfield at the Dail Softball Stadium. It brought to mind the night of June 2, 2017. I could still see a yellow softball flying in the dead of a summer night that Mia Davidson blasted over the centerfield wall in the 7th inning to put Orange ahead 3-2 against Piedmont in game one of their best-of-three 3A State Championship series.

It didn’t take like for other memories from that weekend to flash back. Jaden Hurdle making a huge diving catch in foul ground while Davidson watched on helplessly with eyes big enough to resemble a Simpsons character. Abby Hamlett, in the last at-bat of her Orange career, lacing a two-run double the following day in the second and deciding game. There was also Abby’s torn emotions in the postgame interview, overjoyed about being a member of Orange’s first female team in the 56-year history of the school to win a state championship in any sport, but saddened she would never play with her teammates again.

So as I got the equipment out of the car, I knew there was going to be more memories by the end of the day. I just didn’t know if they would be good ones.

Have I mentioned that I’m only a casual fan of the progressive rock band Yes?

Considering my favorite band, Rush, was so heavily influenced by Yes, I really should be a hardcore fan. But I’m not.

(Editor’s Note: this is the part of the column where I sound really old. I apologize to the younger readers who don’t know who Yes is. Trust me, they earned their spot in the Rock n’ Roll Hall of Fame. Three weeks ago at the Appalachian State-Coastal Carolina football game, about 20,000 of the 31,000 fans at Kidd Brewer Stadium sang along to a Luke Bryan song played over the speakers between timeouts. Naturally, I stood in silence like I was the only person at the comedy club that didn’t get the joke. That’s a pretty lonely feeling. I’m sure Carson Bradsher, who was in the student section of her future college that night, knew every word.)

After Cedar Ridge won the 3A State Volleyball Championship, there were plenty of good memories to share over this website, just as many as four years ago after Orange’s triumph.

I also thought about my favorite Yes song “Close to the Edge,” certainly an acquired taste that you won’t hear on modern corporate radio because it’s 18 minutes and 43 seconds long.

As I got home to prepare for a long night of writing and posting, I looked up the meaning of the song by the group’s (now former) singer, Jon Anderson. As I digested it, it brought to mind more memories of everything that we got back, lost, cherished and celebrated since mid-August.

“Sudden cause shouldn’t take away the startled memory/ all in all, the journey takes you all the way.” According to Anderson, that lyric means: “The idea is that life is an ongoing journey, and you have to enjoy it.”

The state championship that Cedar Ridge captured on Saturday is hard enough to win. You have to stay healthy. You have to have a few lucky bounces. Most of all, you have to deserve to win, something that head coach Fiona Cunningham made sure of by scheduling the most strenuous set of nonconference opponents she could find.

The state championship banner that Cedar Ridge won will hang inside Red Wolves Arena forever, long after the current group of Red Wolves graduate. I’ll remember how skilled this Red Wolves team was, but I’ll also remember how much fun they seemed to have while they rolled to a 31-2 season.

Cunningham, in only her second year, certainly demanded excellence from her players. Yet she also seemed to be the ringleader for team celebrations during games. On most aces, Cunningham would lead the bench and twirl like a ballerina. Naturally, Cunningham, who learned to skate when she was 2 years old, had the best balance. When another team had a returned that went out, all the players would hold their hands up over their eyes like they were a golfer trying to find their ball after an errant drive.

There’s also something wonderful about so many members from a small community playing in front of over 1,000 fans in one of the most famous arenas in this state. On Saturday, high school graduates Lindsay Thompson and Jordan Lloyd joined Cameron Lloyd, Julie Altieri, Anaya Carter, Grace Young, and Lauren Cecil posed for a photo in front of the Kay Yow Court after winning the state title. They all played in White Cross once, and what started there ended with a state title.

There’s an argument that this Cedar Ridge volleyball team may have been the best overall team to ever play high school sports in Hillsborough. I’m sure there are some Orange wrestling teams that would like a rebuttal. So would Orange’s 2008 2A State Championship baseball team. It’s a debate for another column, but I doubt if anyone had more fun with their success.

“A seasoned witch could call you from the depths of your disgrace“–According to Anderson, that lyric means “Your higher self will eventually bring you out of your dark world.”

As you grow older, the deal you make with life is that people and things get taken away from you. It never gets easier.

As mentioned in this space two weeks ago, we lost Janice Hall on October 19. You may have read my reflections about that at the time, but to summarize it, she was like another mother to me.

In September, 30 years after I graduated from Orange, I lost a classmate to COVID-19. That person married someone she met in Orange’s band class and they stayed together.

Two weeks later, I completed another turn around the sun.

All of the above reminded me why I started this website. Not just the joy of watching a team win a state championship, but watching schools accomplish feats that seemed almost impossible not long ago. The Orange women’s tennis team won a match in the 3A State Dual Team Tennis Tournament last month. No one seems to know for sure, but it’s likely that’s the first time it ever happened. Not only that, they became the first public school to defeat Wilson Hunt this year. The team that eliminated them, Cape Fear, won the 3A State Championship over the weekend.

I mean, can you put a price figure on the look in Cameron Lloyd’s eyes in this picture?

“Then according to the man who showed his outstretched arm to space/ he turned around and pointed, revealing all the human race” Jon Anderson: “I’d had this dream where I was up on a mountain. This man was holding me around the shoulders, and he was pointing and saying, ‘That’s the human experience.’ And I smiled because I realized that it was true.”

There’s nothing like watching a state championship. Writing and broadcasting about it is just as fun, especially when it’s in Reynolds Coliseum.

I’ve yet to meet one coach who disagreed with him.

Honestly, you can’t make state championships the only reason you start a high school website. It had to be for the stories and for a community you love. It may be a different environment from what you grew up around as a high school student 30 years ago, but you learn to accept it or grow bitter.

All of which sums up the last lyrics of Close to the Edge.

Maybe I should be a hardcore Yes fan.