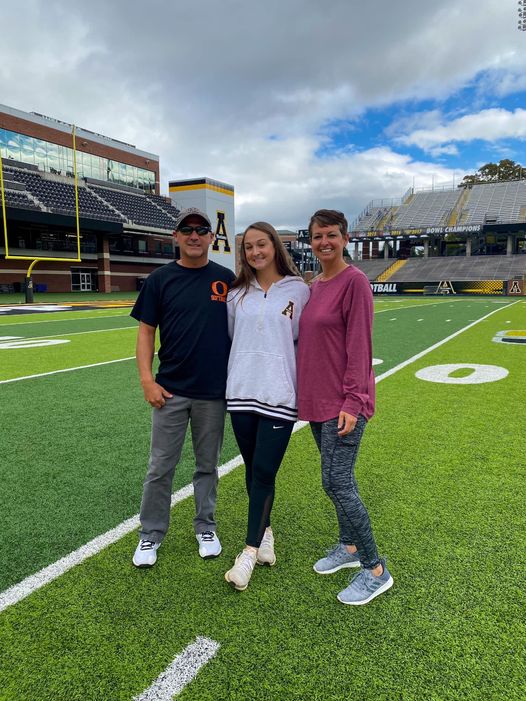 It would be accurate to say that Appalachian State softball has recruited Carson Bradsher for several years.

It’s also fair to say that Bradsher has been recruiting Appalachian State for just as long.

Her first journey to Boone came when she was 12 years old, still with dreams about playing college softball. However, she had just been diagnosed with type one diabetes, which left her with doubts.

Janice Savage, who was the Appalachian State Softball coach at that point, invited Carson to Boone to tell her about one of her own players, who was also a type one diabetic, to prove that her dream wasn’t dead before she started high school.

During the trip, she sat down with her family at the Sunrise Grill along Highway 105 over some chocolate chip pancakes.

From that point forward, Bradsher was hooked.

It was the first of 15 visits she’s taken to Boone. Ten of those trips were with Carolina Elite, her travel team with coach Rick Webster. The rest have been simply to enjoy the pure pleasure of the high country, where her mother Shannon and father Wayne share a trailer with family friends in Banner Elk for vacations.

“Last year, I went for my 16th birthday just to go,” Bradsher said. “We ate at the Daniel Boone Village because I really like that place. Then we walked downtown with Kinsley and Kadence and got our nails done.”

There was another college offer from South Carolina Upstate. Elon, where Bradsher’s teammate Mary Moss Wirt will play next year, also showed interest. But if there was ever a tipping point, it came two weeks ago when Bradsher soaked in an Appalachian experience unlike any other. She watched from the student section at Kidd Brewer Stadium, along with the rest of the softball team, as the Mountaineers’ football squad defeated #14 Coastal Carolina off a 24-yard field goal by Chandler Staton as time expired, setting off a raucous celebration that started when thousands of students rushed the field and carried on well into the following morning.

The next day, Bradsher committed to Appalachian.

“I just liked the atmosphere,” Bradsher said. “When I put that (Appalachian) uniform on, it was like a dream come true. Since I was 12, I wanted to go there. I loved Elon and USC Upstate, but I’ve wanted to be in Boone. I felt relieved because I worked so hard for this.”

Last spring as a sophomore, in her first full season at Orange, Bradsher was named to the North Carolina Softball Coaches Association All-State team. She also earned All-Big 8 Conference honors after she led the Lady Panthers in seven offensive categories.

She hit .700 in a regular season shortened to eight games by the pandemic. Bradsher also led the team in hits (28), runs scored (24), RBIs (20), doubles (7), triples (4) and stolen bases (16). The Lady Panthers finished 8-0, the first undefeated regular season in school history en route to the Big 8 Championship.

In 2020, Bradsher played four games as a freshman before the season suddenly ended because of the pandemic.

Playing at Orange has been a family tradition in the Bradsher family. Shannon was a member of the last slow-pitch softball team that Orange ever fielded, coached by Dave Murr. One of Shanon’s teammates was Constance Poteat, who went on to play basketball at N.C. State under Kay Yow.

While her father, Wayne, never participated in sports at Orange, he has been instrumental in developing Carson with constant weekend trips throughout the country for travel ball. Wayne is currently an assistant coach for Orange, alongside head coach Johnny Barefoot.

“Everyone always told me I could be a college softball player, but you always have that doubt in your mind,” Bradsher said. “I just kept working hard and I always went to Appalachian camps and stuff. They’d always kind of hint at me that they were interested, but they weren’t allowed to come out and say it. So I think the hints from them and other softball coaches helped me.”

At Appalachian, Bradsher will play under Shelly Hoerner, who is in her fourth season in Boone. She was previously the head coach at Georgia Tech.

“They’re the best,” Bradsher said of the coaching staff. “I never met anyone like them. They’re very family oriented. Coach Hoerner is like a mother figure. Coach Show (Shane Showalter, the hitting coach) is like a father figure. They’re really close and they’re all really close to their players. But they also push you so that’s exactly what I needed.”

Bradsher’s commitment to Appalachian comes during a sudden growth surge for the Sun Belt Conference, where the Mountaineers have played since 2014. Over the past week, the Sun Belt has added Southern Mississippi, Old Dominion and Marshall from Conference USA. They’re all expected to officially join their new league in 2023, just in time for Bradsher’s freshman year. Since almost all college sports conference realignment occurs because of football, it’s expected that James Madison will start the process of leaving the Colonial Athletic Association to join the Sun Belt following this week’s Virginia gubernatorial election. The Dukes will probably be the latest team from Virginia to move from the Football Championship Subdivision to the Football Bowl Subdivision.

By the time she arrives to Boone in the fall of 2023, Bradsher will likely play conference games against a James Madison squad that became the darlings of America after a stunning run during the Women’s College World Series last summer, highlighted by pitcher Oddici Alexander.

They’re also changes back home for Bradsher. Orange’s new league, the Central Carolina Conference, will include 2019 3A State Champion Eastern Alamance and perennial power Western Alamance. There’s also 2019 Big 8 Champion Cedar Ridge, which will return the league’s Player of the Year, Takia Nichols, who has committed to play at North Carolina Central. Bradsher grew up playing on travel teams with and against several players who will soon be conference rivals. Her final two years at Orange will not lack for intensity or competition.

Orange lost third baseman Emma Puckett and first baseman Gracie Colley at the end of last season, but there will be seven returning starters, including Wirt, Serenity McPherson and the Big 8 Pitcher of the Year, Gracie Walker.

“We have a good team,” Bradsher said. “Our conference is a lot tougher. We’re not going to have as much room for error, but I think if we work hard this offseason, we should be able to compete. It will be more interesting to play with the new teams.”

When Bradsher graduates from Orange in two years, she will journey to Boone. But she won’t exactly be going away, because she’ll go to a place that reminds her so much of the Cedar Grove Ruritan Club, where she first put on a glove.

“This will be like home to me,” Bradsher said.