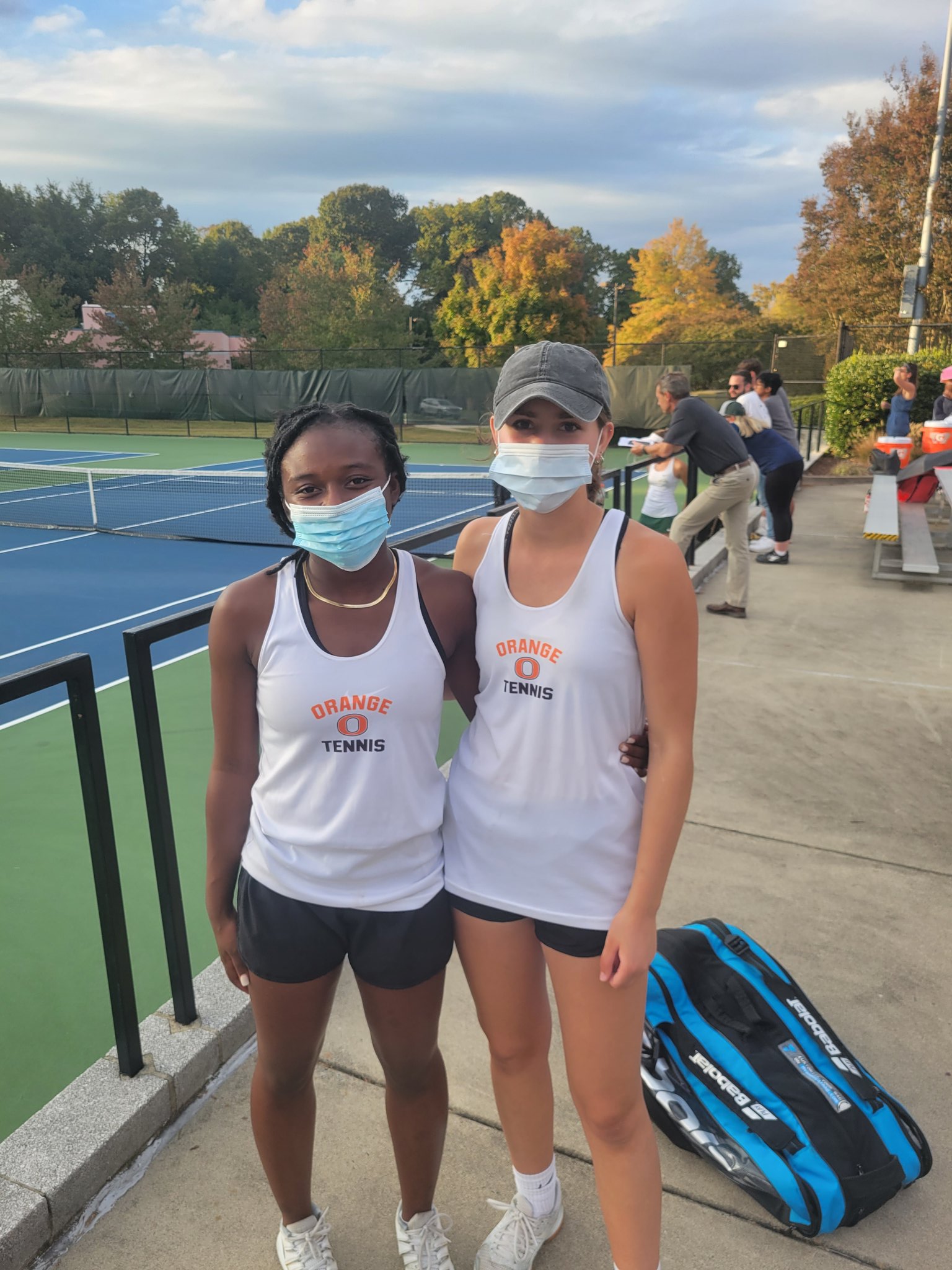 It’s not everyday that the Orange women’s tennis team wins in the 3A State Dual Team Tournament.

In fact, it may not have happened at all in school history—until last Wednesday.

Orange, who qualified as a wildcard from the Central Carolina Conference, stunned Fike in Wilson 5-3 in the opening round of the state tournament. The Demons entered the match with a 17-1 record and won the Quad County Conference championship with a 14-0 mark. They were ranked #4 in 3A, according to North Carolina High School Tennis Coaches Association.

Orange became the first team from Hillsborough since the 2016 Cedar Ridge squad to win a match in the state tournament. The 2016 Red Wolves won the Big 8 Conference Championship with a 12-0 conference record and advanced to the state quarterfinals.

“I told the team it’s a huge accomplishment,” said Orange coach Justin Webb, who took his team to Chipotle for a celebratory dinner on the bus ride back to Hillsborough. “There’s 109 3A teams. Of those 109, only 32 make the playoffs. No one is going to be super easy. Now, we’re in the top 16 and that’s a huge honor.”

On Tuesday, Orange will travel to Fayetteville to face Cape Fear in the 2nd round. The Lady Panthers are 16-4, reaching what is widely believed to be a school record for wins in a season.

Orange’s #2 doubles team of Jera Hargrove and Erin Sollars sewed up the milestone win for the Lady Panthers with an 8-1 victory.

The victory also served as a homecoming for Webb, a Wilson native for graduated from UNC-Chapel Hill.

The big week for Orange tennis didn’t end there.

Hargrove and Sollars will be the #3 seed in the Mideast. On Saturday, Hargrove and Sollars defeated a team from the Durham School of the Arts in the consolation round 7-5, 7-5. Hargrove qualified for regions as Orange’s top singles player during her freshman and sophomore years, but feel just short of reaching the state championships.

“Jera has made a big difference, particularly towards the end of the season,” Webb said. “She has a ton of experience. I think the girls look up to her and her being in the lineup gives the team more confidence. It also makes us much deeper than we were at the start of the season.”

One of the many reasons why this season has been so successful for Orange is depth. Webb started the season with 23 players, the most during his tenure. Fike, despite winning its conference championship, had just seven.

“It’s makes a big difference when you have that much depth,” Webb said. “I think some of it is just word of mouth. The girls have done a great job in promoting the team and promoting the sport. People come out and see how much fun it is. That makes them want to come out and play it. I think COVID has helped in some ways. Tennis is definitely a low contact sport, so I think a lot of people feel safer playing this.”

Cedar Ridge singles players Cameron Mayhew and Chloe Patz competed during the Mideast Regionals on Friday. So did Orange sophomore Finley White, who qualified for regionals for the second straight year, and sophomore Grace Pell.