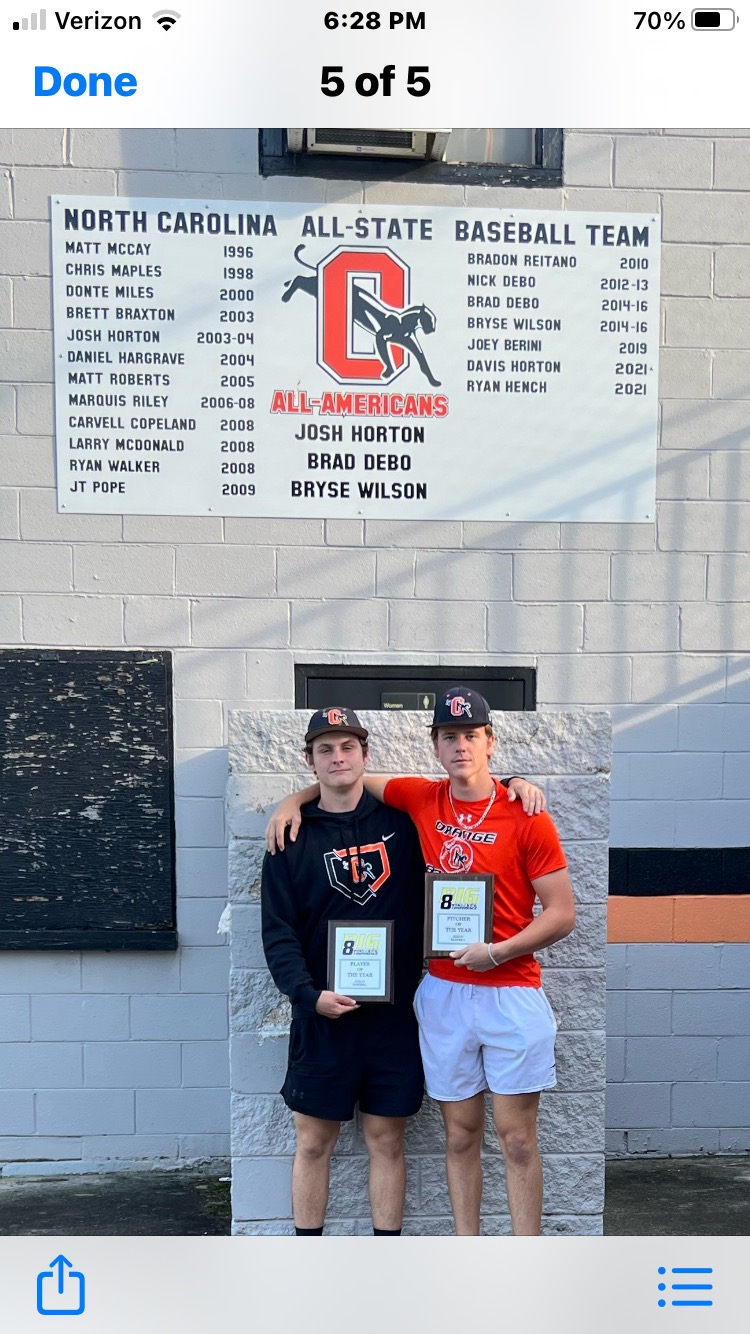 The North Carolina Baseball Coaches Association have named Hench and Horton to its 3A All-State team. They were the only players from the Big 8 Conference honored by the NCBCA.

Both Hench and Horton played their first full season with Orange during the abbreviated 2021 campaign, which was paired down to 14 games due to the pandemic. They comprised a battery that led the Panthers to a share of the Big 8 Conference championship with a 6-1 record, tying Northern Durham for 1st place.

Hench, a junior, was on the Orange varsity as a 9th grader. He season was limited to one game on March 4, 2020, against Eastern Alamance. In his first high school pitching appearance, Hench recorded the final five outs in order against the Eagles in a 6-2 Panthers win. His older brother, senior Cooper Hench, started at third base that night. It was the first time the siblings shared the field in an Orange uniform, and neither had any idea it would also be the last. A week later, the season shut down because of the COVID-19 pandemic, which cost Cooper the rest of his Orange career.

Orange entered 2021 with question marks about its pitching rotation, which were answered during a four-day span starting on May 7. Hench threw four shutout innings against Northwood for his first varsity win. Four nights later, Hench was selected by head coach Jason Knapp to start again, likely with a state playoff birth on the line, at Chapel Hill. Hench put on a dazzling performance, throwing a two-hit, complete game shutout with 14 strikeouts. Orange won 5-0, a win that would carry them to the 3A State Playoffs.

Hench threw 18 consecutive shutout innings to start 2021. The first run he surrendered, which came at Northwood on June 1 in Pittsboro, was unearned. Hench ended the season 3-0 with a a 2.22 ERA. He also swung a strong bat, to the point where Knapp would often position him as a pitcher and designated hitter. Hench hit .421 with three home runs, which led the team.

Though it came in a reduced regular season, Horton hit safely in all 14 of Orange’s regular season games. The streak started in a 15-5 win over 2019 Big 8 Conference champion East Chapel Hill on April 27, when Horton went 3-for-5 with two doubles and a home run. He finished with five RBIs against the Wildcats.

Horton, a junior, ended the regular season with a 16-game hitting streak. That extended to his final days at Riverside, where he had hits against Wake County Home Schools and Green Level in 2020, the only games the Pirates played that year.

Last spring/summer, Horton led the Panthers in four offensive categories. He hit .490 with 24 hits and 15 RBIs. He tied with Hench with a team-high six doubles.

Defensively, Horton provided Orange with its most reliable presence behind the plate since the graduation of Brad Deno in 2016. Debo went on to play four seasons at N.C. State.

Though the Big 8 Conference was limited to two automatic state playoff spots, Orange still made the field of 32 as the #2 seed from the Big 8. In the opening round, Asheboro defeated Orange 5-4 at McCrary Park on June 15 in a thrilling game that ended with the Blue Comets’ Tanner Marsh doubling off the left field wall to score Camden Walker. Orange battled back from a 4-0 deficit to tie the game 4-4 at the end of the fifth inning. Hench helped spark the rally with a double and eventually scored off an RBI single by Jaren Sikes. Hench singled in the fifth, which set up Conner Funk knocking in Will Walker for the tying run.