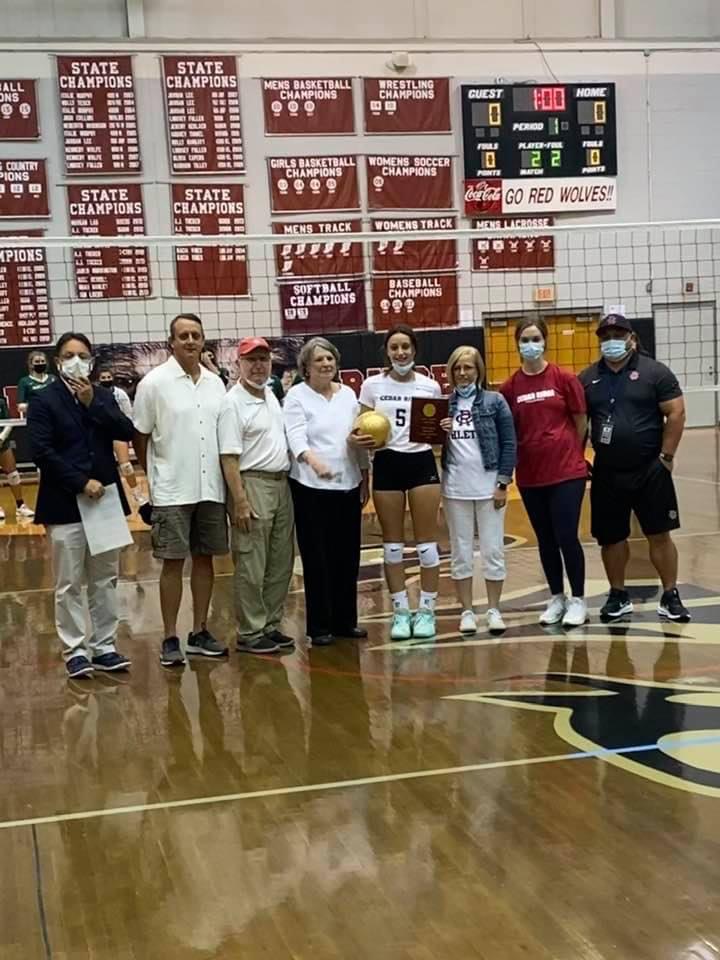 There’s an old saying that if you do more than you’re supposed to do for someone else, you get back twice as much.

That’s Julie Altieri in a nutshell. For two-and-a-half years, she’s been Cedar Ridge’s version of Chris Paul, setting up outside hitters Cameron Lloyd and Cameron Lanier for kill after kill on the volleyball court. Since Altieri, Lloyd and Lanier started together as freshmen under former head coach Anna Seethaler, the Red Wolves have gone 41-8. They’ve won 17 consecutive conference games and are two wins away from a second straight conference championship.

No one in the history of Cedar Ridge volleyball has served up more assists that Altieri.

That may be the main thing she’s remembered for once she graduates in June 2023, but it won’t be the only thing.

She probably leads Cedar Ridge in making her teammates laugh, photo bombing video interviews while unsuspecting players digest questions and finding ways to keep the ball off the court after it takes wild bounces off overhanging basketball rims, a teammates’ foot or even the roof (which actually happened last night).

On Tuesday night before Cedar Ridge’s game against Northwood, Altieri was honored for her 1,000th career assist, a milestone she reached against Eastern Alamance on September 9. Two days after the win over the Eagles, Altieri had a season-high 36 assists in a sweep of Western Alamance. Her career-high is 44 against Vance County on September 24, 2019.

Altieri’s rapport with Lanier and Lloyd started long before the fall of 2019. At the age of 7, Altieri began playing at the Orange County Recreation Department before transferring over to White Cross. At the time, she went to New Hope Elementary School with Lanier. The two were also teammates at Stanback Middle School. On the recreation court in White Cross, Altieri first stepped onto a court against Lloyd, but they weren’t teammates.

“We were still developing as players, so we really couldn’t spike the ball that hard yet,” Altieri said. “But I knew she could play.”

“I’ve played with Julie for many years and it’s good to see all her hard work pay off,” Lloyd said. “Every hitter needs a setter. My favorite memory is when we received our medals from Minnie Mouse at AAU Nationals, but every big high-school win has been fun with Julie. The excitement of competing & the thrill of the win.”

It was in White Cross that the coaches encouraged Altieri to remain a setter. When she was 12, she started playing for the Chapel Hill Area Volleyball Club alongside Lanier. In her second year with CHAVC, Altieri, Lanier and Lloyd finally became teammates. establishing a bond that would lead to championships.

Even after winning a conference title in 2020 and still riding an impressive conference winning streak that has spanned three years, Altieri says her most memorable win came when she was a freshman as the Red Wolves stunned defending 3A State Champion Chapel Hill at Red Wolves Gymnasium.

“That was our first really big win,” Altieri said. “We were all just speechless. We couldn’t believe that it happened. We didn’t think we could win. We just hoped for the best.”

Afterwards, the teamed enjoyed dinner together at Pueblo Viejo Mexican Restaurant, which has become the official postgame victory headquarters. Naturally, after Altieri was presented with a golden volleyball after Tuesday’s win over Northwood, pictures from Pueblo Viejo emerged in social media hours later, complete with the obligatory chips and salsa.

In 2020, Altieri started every game in a pandemic-shortened season, where the Red Wolves claimed its first Big 8 Championship in five years. Cedar Ridge finished the regular season 8-0, defeated Union Pines in the opening round of the 3A State Playoffs before falling to eventual 3A State Champion D.H. Conley in the second round in Greenville.

As a freshman, Altieri led the Big 8 Conference in aces. Now a team captain, Altieri was an All-Big 8 Conference selection in 2020. For three consecutive years, she was on the American Volleyball Coaches Association Phenom Watch Lists. In 2019, she was named the best server in the 2019 Capitol Hill Classic 14 Open in Washington, D.C.

Her brothers, Eddie and Andrew, played basketball at Cedar Ridge.

With school out of session during the pandemic last October, Altieri still kept busy by playing beach volleyball. She teamed with Jordan Dailey to finish in second place in the Sinjin AVP American Open event in Raleigh. She had multiple top three finishes in junior beach volleyball tournaments before she became a teenager.

With a litany of awards and honors, Altieri could easily find herself playing volleyball in college. While she appears to be the life of the party on the court, she’s also preparing a life away from it. Altieri has a 4.2 GPA. She says no college is recruiting her. If a school does show interest, she says she would be more interested in launching a career in a medical field.

As common as winning has become, Altieri says it hasn’t grown to be ordinary. Last Thursday night, when Cedar Ridge traveled to Roxboro for its first Central Carolina Conference game against Person, there was a jam-packed student section that was anything but socially distanced. Lesser teams have wilted under the pressure in years past.

Cedar Ridge hardly blinked. They dominated the Rockets in straight sets to complete a season sweep. It was another triumph for a junior class that has stockpiled success time and again over the past three years.

Altieri doesn’t know when her volleyball career will end. But she’s savoring every moment she has with a junior class that will be remembered, years down the line, as the golden age of Cedar Ridge volleyball.

And she’s doing it one assist at a time.