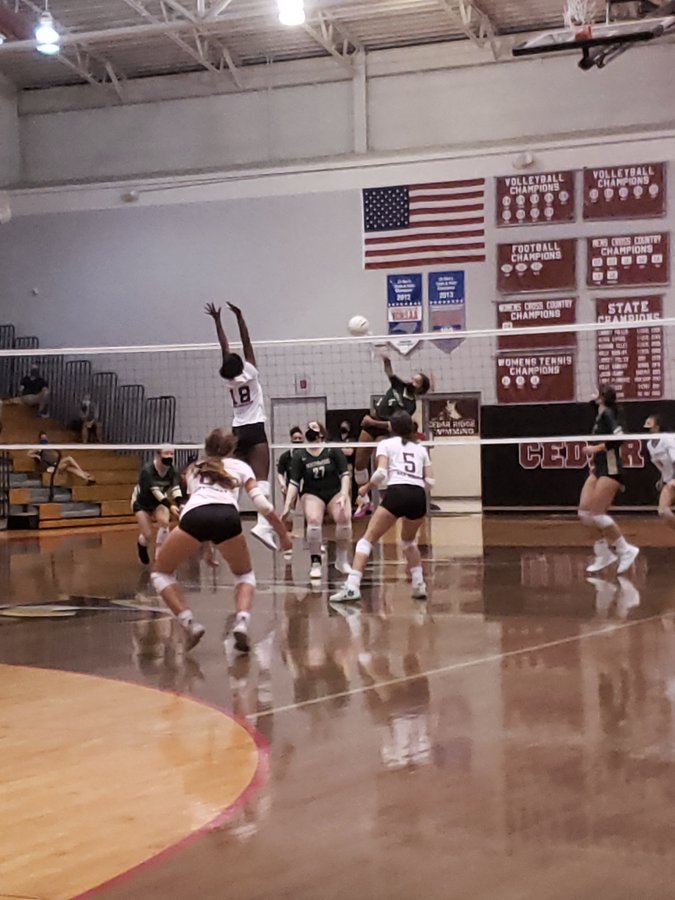 The stakes were high in the rematch between Cedar Ridge and Northwood on the volleyball court inside Red Wolves Gymnasium on Thursday night. For obvious reasons, so was the intensity.

For all intents and purposes, Northwood had its hopes of winning the Central Carolina Conference on the line. A victory would tie Cedar Ridge for first place. A loss would put them two games behind the Red Wolves with four CCC league games remaining. Essentially, it would be a three game deficit since the Red Wolves would control the head-to-head tiebreaker with a win.

Even after 41 victories since August 2019, winning hasn’t grown tired for Cedar Ridge. Even when they lose the opening set, they remain emotionally balanced.

All of which led the Red Wolves to another convincing win.

The Chargers (13-4, 6-2) will host Person in Pittsboro on Thursday. The loser will be mathematically eliminated from the CCC regular season championship race.

Northwood came out strong behind the attack of senior Hannah Forbes, who has committed to play at UNC Wilmington, and sophomore Asia Thigpen, the daughter of UNC co-Defensive Coordinator Tommy Thigpen. Northwood built a 9-4 lead after erratic serving from the Red Wolves early. The Red Wolves drew closer with a 4-0 run after kills by Cameron Lloyd and Cameron Lanier. Cedar Ridge had a set point after a block by Addie Reid, but Northwood finished the set with three straight points, including a kill by Forbes on set point that was ultimately ruled to have hit the floor, despite an initial ruling from the chair umpire that Cedar Ridge had won the point. It was just the seventh set the Red Wolves have dropped this year.

“I think it was good serves by Northwood,” said Cedar Ridge volleyball coach Fiona Cunningham. “They put a lot of pressure on us. We just didn’t match it. I don’t think it was anything really horrible on our end. I think they played really great.”

Cedar Ridge’s serving was much better for the rest of the night. The Red Wolves never trailed in the second set and leapt out to an 8-3 lead. With Lloyd serving, the Red Wolves had an early 6-0 run that featured a block by Reid and a kill by Lanier. Lanier racked up four kills in the second set, and Julie Altieri finished set point with a kill assisted by libero Grace Young.

The second set started 7-7 before Young went to serve after a Cedar Ridge side out. The Red Wolves proceeded to reel off seven straight points, which included three aces by Young. After Thigpen notched another finish to reduce the Charger deficit to 17-9, the Red Wolves went on another 6-0 spurt, complete with three more kills from Lanier.

With its backs against the wall, Northwood pushed out to a 7-2 lead in the fourth set behind an ace from Thigpen. Cedar Ridge responded with a 5-1 run to reduce the gap to 7-6. The Chargers led 19-17 before a Northwood return went into the net. Cedar Ridge finished the set with five of the last six points, including a kill by Anaya Carter and another from Lloyd. On match point, Lloyd set up for another kill. The block attempt by Forbes landed wide of the boundary and the Red Wolves secured a season sweep of the Chargers.

“Our girls are very determined to win,” Cunningham said. “As soon as you take a knock at that, they bounce right back. They don’t want any pressure put on them. And as soon as you do, they will rise to it.”

Cedar Ridge will travel to Orange on Thursday.