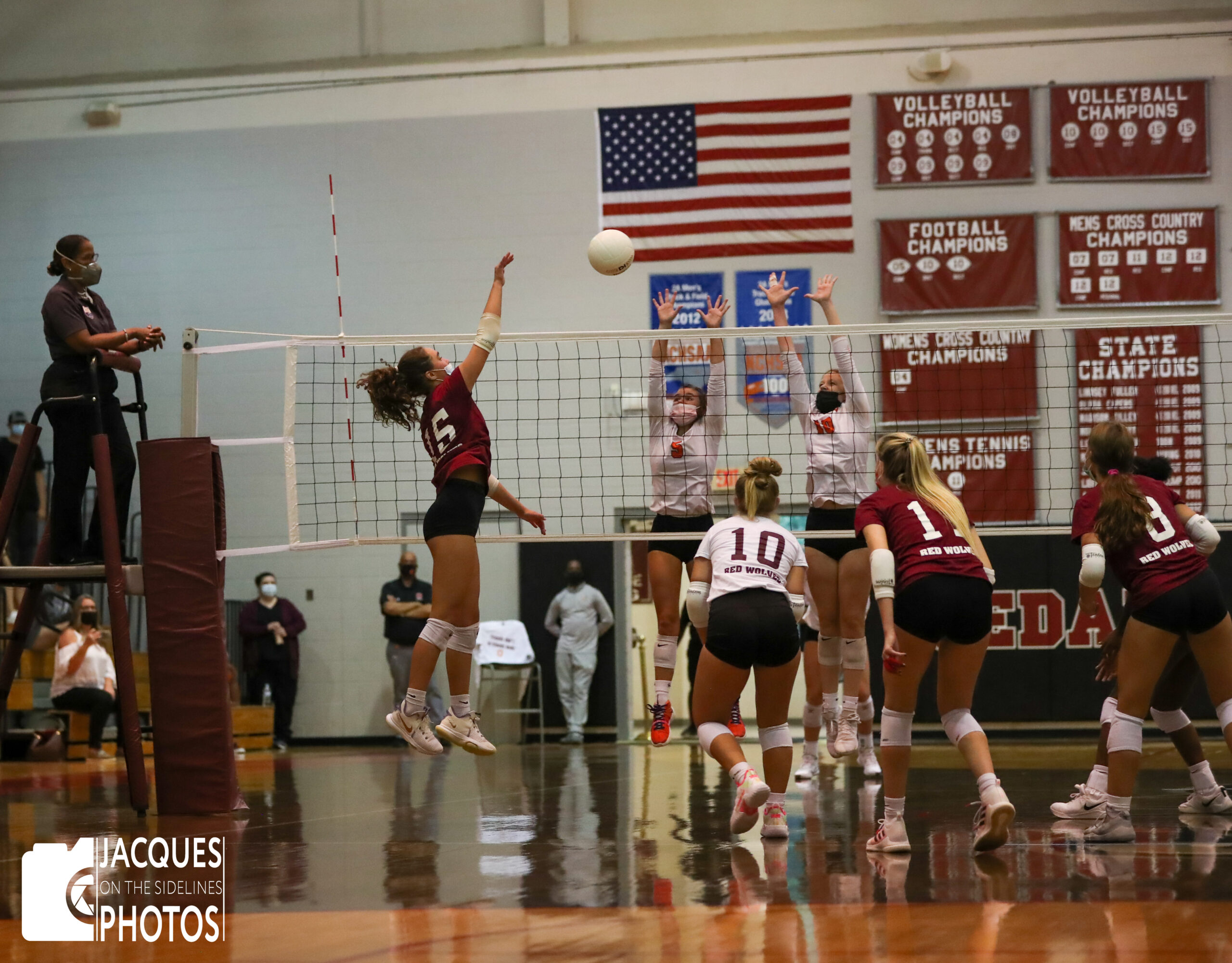 It’s been three weeks since the start of the season and the Cedar Ridge volleyball team still hasn’t lost a set.

Through the course of an 8-0 start, the Red Wolves have shown a propensity to win the pressure points in tight sets. Against Orange on Tuesday night, the second and third sets were filled with such crucial moments that define winners and losers.

Cedar Ridge has now won 24 consecutive sets to open the season. They have sole possession of first place in the Central Carolina Conference.

Led by a boisterous Wolf Pack student section decked out in black, the bleachers were packed with fans representing both schools. The overflow crowd spilled out into the end zones and would have easily filled the few empty seats along the wooden rows in the bleachers.

“It’s our rival,” said Cedar Ridge junior Cameron Lloyd, who was honored before the game for reaching 500 career kills last week in a win over Person. “It’s crazy. It’s fun. Sometimes during the game, it’s like ‘Oh my God, I’m going to vomit.’ It just feels so amazing, whether you win or lose.”

Orange (3-1, 1-1), who has played the entire season without Big 8 Player of the Year Lottie Scully and junior All-Conference Erin Jordan-Cornell, had four set points to win the third. After Kinzy Rowney scored a kill on an assist from Caitlin Carden, Orange served for the frame leading 24-20. It led to the longest and wildest point of the match, where Red Wolves sophomore Graylinn Serge made three separate digs on attacks from Orange’s Avery Miller and Ella Van Tiem. Finally, Cedar Ridge’s Cameron Lanier finished the struggle with a spike off an assist from Julie Altieri.

Lloyd sent a changeup over the net and over the outstretched hands of two Lady Panthers for another point. Serge made another dig off an Orange spike, which Altieri quickly passed over the net into a vacant spot on the floor to cut Orange’s lead to 24-23. Junior Melissa Benkowitz notched an ace that bounced off the right corner of the court to even the set.

With the scored tied 25-25, Lanier scored off a block, and Lloyd earned match point on another kill.

It was the Red Wolves’ third win over Orange in their last four meetings.

The second set featured twelve ties and four lead changes. The Red Wolves bolted out to a 6-2 lead behind three early kills from Lloyd and an ace from Altieri. Orange rallied to tie with four consecutive points off back-to-back kills from sophomore Ella Wimsatt. After Rowney earned a kill off an assist from Carden, Orange took a 20-18 lead. The Red Wolves responded with five consecutive points, including a block from Lloyd, followed by a kill from Lloyd. The Panthers responded with three straight points, capped by an ace from libero Sadye Porter to even the set 23-23.

The Red Wolves had four set points in the second. The first of which was nullified after junior Allie Wilkerson tipped the ball over the net. With the set tied 26-26, Lloyd registered another block. Serge scored set point with an ace that bounced on the back line.

“They’re a good team,” said Orange coach Kelly Young. “I told my girls that these are the teams you want to play because they make you a better team. So we see exactly what we need to work on. We only get better from it.”

Orange will return home to face Person on Thursday. It will be the first conference game, in any sport, between the Rockets and the Panthers in over 20 years.

Cedar Ridge will travel to Eastern Alamance on Thursday. The Red Wolves will look to improve to 9-0, which would be the best start in school history.