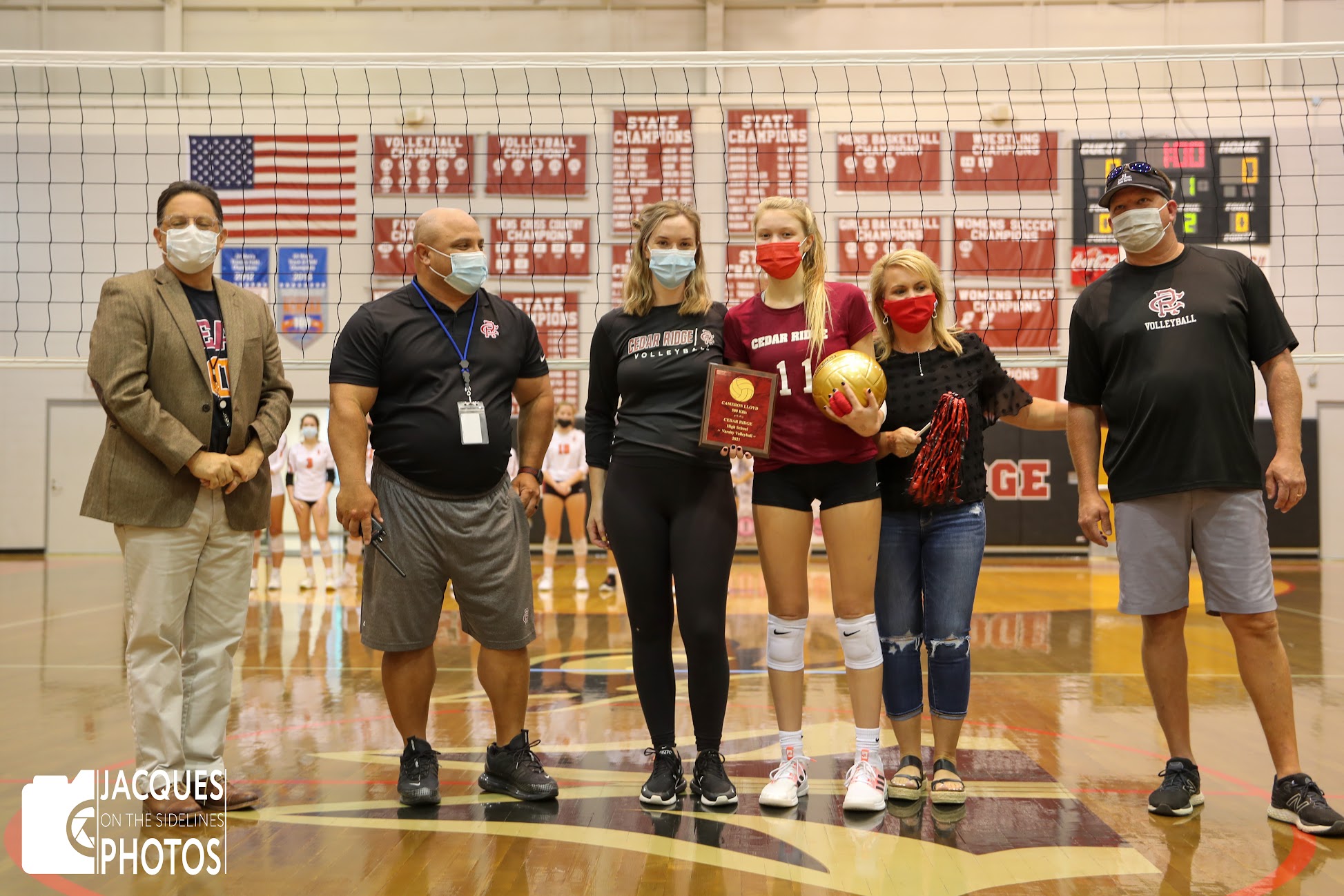 To understand how Cameron Lloyd advanced so far, so quickly in her volleyball career, you have to understand that competitiveness runs through her family.

Her father, Joel, played basketball at Orange. After graduation, while he was still dating his soon-to-be-wife Sherry, he could be seen on sweltering summer nights in White Cross playing right centerfield in modified pitch softball. In the winter, there would be recreation basketball just behind the softball field. It was a league so rough and tumble, you had to present your x-rays to get a free throw.

Cameron’s sister, Jordan, wasn’t the tallest volleyball player. She wasn’t the hardest hitter. But she probably led the Big 8 Conference in floor burns diving for digs. Her focus and intensity helped lead Orange to the 3A State Playoffs. Jordan played two years with Brevard College.

As Cameron arrived at Cedar Ridge, the Red Wolves program had fallen from its peak. In 2015, Cedar Ridge won the Big 8 Conference Championship and went 24-3. They reached the Eastern Regional Championship match, where they fell to Asheboro in four sets.

Following the season, Charlie Oakley stepped down as coach. The Red Wolves went through three consecutive losing seasons. Cameron reached the varsity as a freshman with classmates Julie Altieri and Cameron Lanier.

Since then, Cedar Ridge has gone 35-7, claimed the 2020 Big 8 Championship, beaten nearby powerhouse Chapel Hill twice and has won 13 consecutive conference games.

“Cameron is always someone we can depend on,” said Cedar Ridge volleyball coach Fiona Cunningham, now in her second season. “She’s great in all six rotations on the court. What really makes or breaks the team when sets get tight is who takes the swings. Cameron is the best arm on the team.”

Cameron surpassed 500 career kills early in a win over Person on August 31. It is a school record.

Earlier in the day, Lloyd, Lanier, Julie Altieri and sophomore Graylinn Serge were all named to the American Volleyball Coaches Association Phenom watchlist. The list is designated for the top underclassmen who have received significant recognition for their outstanding volleyball play.

Last season, Lloyd led Cedar Ridge with 111 kills through an undefeated (limited to eight games due to the pandemic) regular season. In each of her first two years at Cedar Ridge, she has been named the team’s Most Valuable Player and to the All-Big 8 Conference team.

During her freshman year at Cedar Ridge, under then-head coach Anna Seethaler, Lloyd led Cedar Ridge with 346 kills. Altieri had 586 assists serving up finish after finish to Lloyd and Lanier, who finished with 193 kills as a 9th grader. The freshman triumvirate paced Cedar Ridge to a stunning victory over defending 3A State Champion Chapel Hill to open the Big 8 Conference season. The Red Wolves finished 2019 with its first winning record in four years and an appearance in the 3A State Playoffs.

Lloyd is a member of the Chapel Hill Volleyball Club. During the summer, she has traveled throughout the country for travel ball tournaments, as well as beach volleyball. She is a 12-time medal winner in the AVP/ESPL beach tournament. In 2019, Lloyd was the MVP of the Carolina Regional Tournament. She also earned the All-Star award at the AAU Junior Nationals.

Fittingly, Lloyd had the final kill on match point as Cedar Ridge defeated Orange in three sets on Tuesday night.