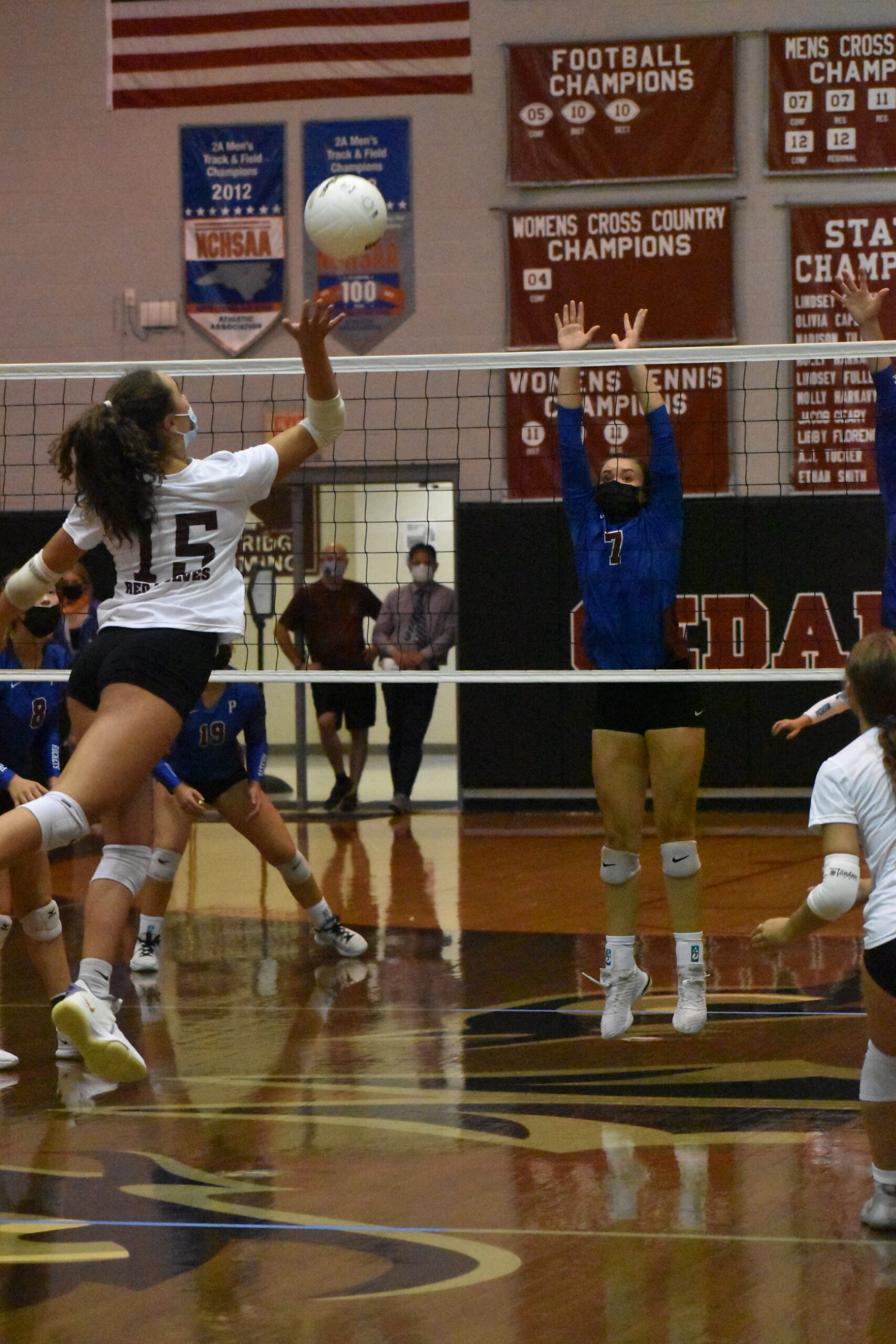 The chase for the Central Carolina Conference volleyball championship figures to be a horse race this year.

When you’re in a horse race, you want to be riding a thoroughbred. And that’s the rub for the challengers to Cedar Ridge right now.

Cedar Ridge doesn’t have only one thoroughbred.

If there was one lesson in January’s loss to D.H. Conley in the 3A State Playoffs, it was that the Red Wolves needed more finishers. The Vikings had an endless supply of outside blockers, most over 6-feet tall, who could slam the ball off the hardwood effortlessly.

The Red Wolves have spent the opening weeks of the 2020-2021 season showing they learned their lesson from last winter very well. The Person Rockets, a traditional power with a reputation that proceeds them, found themselves on the receiving end for a change Tuesday night.

The Red Wolves defeated the Rockets 3-0 on scores of 26-24, 25-23 and 25-15 at Cedar Ridge Gymnasium. Cedar Ridge junior Cameron Lloyd, the daughter of Joel and Sherri Lloyd of White Cross, finished with 19 kills, four aces and 12 digs, while Cameron Lanier had ten kills, including the final spike on match point. Julie Altieri, who is nearing 1,000 assists for her career, finished with 31 assists.

Cedar Ridge (6-0, 1-0 in the Central Carolina Conference) handed Person its first 3-0 loss since October 10, 2019, when they fell to McMichael. It was only the third time Person has been swept since 2018.

“She (Lloyd) did phenomenal tonight,” said Cedar Ridge coach Fiona Cunningham, who improved her mark to 15-1. “She’s someone you can depend on in all six rotations on the court. It really makes and breaks the team when it gets tight as who can step up and take the swings.”

Both teams were clearly anxious to open the match as there were several service errors early. Cedar Ridge built a 19-12 lead in the opening set behind six kills from Lloyd. The Rockets went on a 10-2 run to even the frame at 21-21 after a kill by senior Jacie Kennedy. After Person’s Lillie Davis had a flash kill to tie the match at 24-24, Cedar Ridge took the lead after a Rocket serve went into the net. Altieri, who usually sets up kills, delivered one of her own on set point off an assist from libero Grace Young to take the opening frame.

The second set was another tight one. The Red Wolves opened up a 12-7 lead behind four kills from junior Melissa Benkowitz. Person went on a 7-2 run late in the set to even things at 23-23. That’s when Lloyd came up with consecutive huge plays. She received a Person service and scored a kill off an assist from Altieri. On set point, Lloyd lofted a serve that touched the back line for an ace, and Cedar Ridge led 2-0.

The Red Wolves were fresher in the third set. Five differed Cedar Ridge players recorded kills. The point of the match came with Cedar Ridge leading 15-9. It appeared that Kennedy had spiked home a winner for the Rockets, but Young placed her hand on the floor. The ball rebounded off Young’s hand straight to Altieri. Meanwhile, the Person players started celebrating thinking they had won the point. Cedar Ridge didn’t stop playing and Lloyd ultimately notched yet another kill.

Lanier, who had six kills and one block in the third set, scored match point for Cedar Ridge, who won 25-15.

“We’ve been working all year in getting our offense to be more diverse,” Cunningham said. “When we play relaxed, like we did in the third set, they’re really comfortable with running that diverse offense. It’s when you see who we trust to take the swings when we’re a little bit tight.”

Cedar Ridge will travel to Northwood on Thursday.