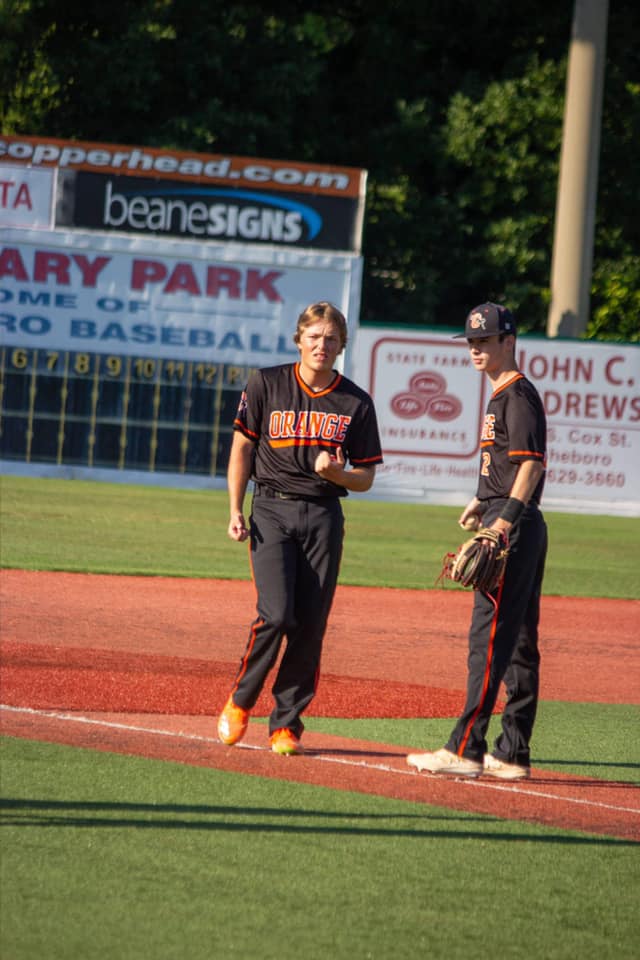 Despite the 3A State Baseball Playoff field being narrowed down from 64 to 32 teams this year because of the pandemic, the Orange Panthers still made the postseason for the 19th consecutive year.

Six Orange players were honored on the All-Big 8 Conference team, which was announced after all the Big 8 teams were eliminated from the postseason.

Junior catcher Davis Horton, the Big 8 Player of the Year, was among the players honored. So was sophomore Ryan Hench, the co-Big 8 Pitcher of the Year.

Horton led Orange with a .490 batting average and hit safely in every regular season game. He paced the team with 24 hits and 15 RBIs.

In addition to being Orange’s top pitcher, Hench was among the top hitters on the team. Hench, who rotated with Cesar Lozano at third base when he wasn’t on the mound, hit .421. He was second on the team with 16 hits. Hench also tied for the team lead with six doubles. He was such a reliable bat that he usually remained in games as a designated hitter even after being replaced as pitcher. In Orange’s final game of the year, a 5-4 loss to Asheboro in the 3A State Playoffs, Hench went 2-for-4 with a run scored.

Before the season started, Walker committed to play at Pitt Community College. He finished the year with a .324 average with 14 RBIs. Walker’s best stretch of the season came during a four-game winning streak that started in late May. In a 7-0 win over Walkertown on May 25, Walker went 3-for-3 with 3 RBIs. In the sixth inning, Walker hit a ground-rule double that brought in Conner Funk and Jacob Jones. Against Northwood on June 1 in Pittsboro, Walker went 1-for-3 with 2 RBIs, including a RBI single in the third inning that scored Waitt and pushed Orange ahead 4-1. Against Cedar Ridge on June 8, Walker had a two-run single during a 11-run 7th inning as the Panthers came back from a 6-3 deficit to win 13-6.

Berini played his first full varsity season in 2021. He started every game at shortstop, the position where his older brother Joey played for four years at Orange before moving on to East Carolina. Jackson, who lead off in every game, hit .333. Berini led the team with 16 runs. He also had 14 hits, which was tied for third-best on the team.

In Orange’s 10-1 win over Northwood on May 7, Berini reached base in all four plate appearances. He went 2-for-2 with three runs scored. Berini opened the game with a single and scored off a double by Funk. Berini’s base running prowess paid dividends early in Orange’s 3-2 victory over Chapel Hill on June 4 in Hillsborough. Berini walked to lead off the bottom of the first. Horton singled, which led to Berini moving over to third. Horton raced for second base after Berini slid in safely, which led to an errant throw by Chapel Hill that wound up in centerfield. Berini scored, and Horton followed right behind him to give Orange an early lead they would not relinquish.

In his first year as a starter, Waitt hit .304 with 14 hits. In a 19-9 win over Cedar Ridge on May 5, Waitt launched a three-run homer in the first inning over the left field wall. Waitt went 4-for-4 against the Red Wolves with four RBIs and three runs. Against Chapel Hill on May 11 at Tiger Field, Waitt went 2-for-4 with an RBI single in the seventh inning to score Jones.

Sikes was a regular starter in centerfield. He hit .364 and reached base in 12 of 13 games. Against Northwood on June 1, Sikes went 2-for-3, including a triple down the left field line that scored courtesy runner Mason Thompson to tie the game. In the fourth inning, Sikes walked and scored off an error for an insurance run. Sikes was also a relief pitcher who made mound appearances in wins over Walkertown and Northwood.