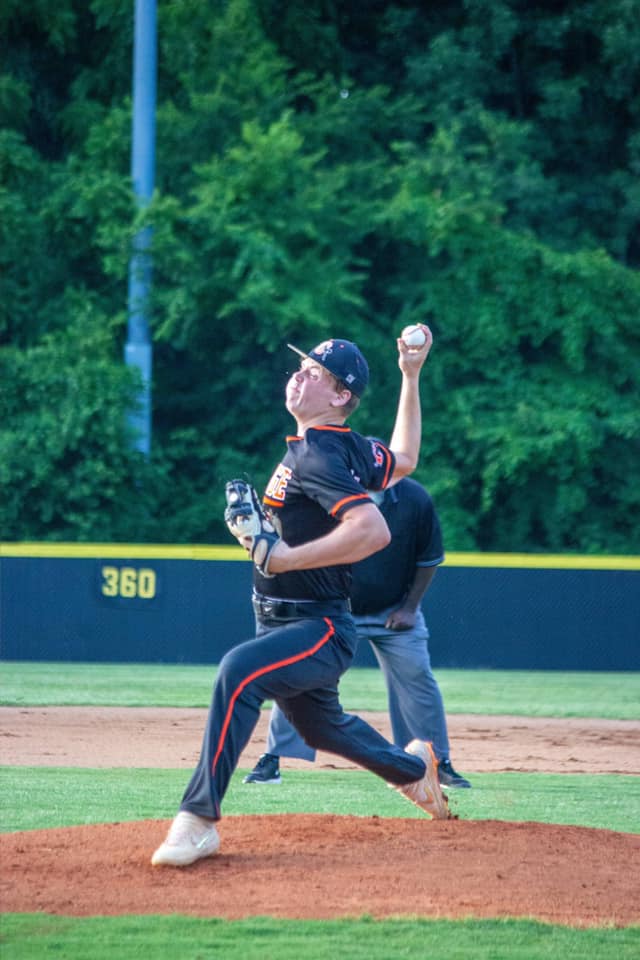 Anyone who saw the May 18 game baseball game between Orange and Northern Durham drove out of Hillsborough knowing they saw the two best pitchers in the Big 8 Conference.

In a showdown to determine the #1 seed for the 3A State Playoffs from the Big 8, Orange’s Ryan Hench and Northern’s Matthew Lombard each threw six consecutive scoreless innings. They each struck out eleven. Only one Northern player reached third base when Hench was in the game. Orange loaded the bases twice against Lombard, who calmly got out of the jams in the first and third innings.

Based on North Carolina High School Athletic Association rules, Hench had to leave the game to start the 7th inning as he approached a 105-pitch limit. Against Orange’s bullpen, Northern ended the stalemate with four runs in the seventh to win 4-0.

Hench and Lombard have both been honored as co-Big 8 Conference Pitchers of the Year. The awards were determined after a vote of the Big 8’s coaches after Northern was eliminated in the second round of the 3A State Playoffs by D.H. Conley.

In his first season as a varsity starter, Hench went 3-1 with a 2.22 ERA. He was second in the Big 8 Conference with 49 strikeouts, trailing Lombard’s 51. Hench allowed just 12 runs over 34 innings.

After Northern secured the top-spot from the Big 8 Conference for the 3A State Playoffs, Lombard didn’t make another start for the rest of the regular season. He only made sporadic relief appearances in the second half of the year, which included a win over eventual 4A State Champion Fuquay-Varina. It was Northern’s first winning season since 2016.

Hench, a sophomore, had not started a varsity game entering 2021. His only varsity pitching appearance came in his freshman year when he replaced Jordan Underwood in a win over Eastern Alamance in 2020.

By the time the season ended, Orange Coach Jason Knapp knew he had his top starter for the next two years.

Hench erased all doubt on May 11 when Orange shutout Chapel Hill 5-0 at Tiger Stadium, which sewed up a state playoff spot. Hench delivered the first complete game shutout by an Orange pitcher since Cooper Porter against Cedar Ridge in 2019. He threw a two-hit shutout and allowed just five baserunners, two of whom reached on dropped third strikes. It was a power pitching performance not seen since Byrse Wilson’s senior year in 2016.

In just his second varsity start, Hench struck out 14 Tigers and earned the complete game on only 90 pitches. It was the most strikeouts in a game by an Orange pitcher since Wilson struck out 15 against East Chapel Hill on March 21, 2016. In the 7th inning, Hench drilled an RBI single to the centerfield wall to score Jackson Berini for an insurance run.

Hench’s Chapel Hill start came on four days rest. He made his starting debut the previous Thursday in a 10-1 victory over Northwood in Hillsborough. After Orange opened the game with five runs in the first inning, Hench threw four hitless innings. He had one walk, which was the only baserunner he allowed, and struck out four to notch his first varsity win.

Hench didn’t allow a run in his first three starts. That streak ended against Northwood on June 1 in Pittsboro when he conceded an unearned run in the first inning. After that, the Chargers didn’t get another hit in the subsequent four innings. Hench took the win, which turned out to be his final one of the season.

In the opening round of the 3A State Playoffs, Hench started against Asheboro. Following a shaky start where he allowed four runs in the opening two innings, Hench shut out the Blue Comets over the next four innings as Orange fought back to tie the game 4-4 going into the 7th inning.

Hench’s older brother, Cooper, pitched at Orange from 2017-2020. Cooper Hench went 4-1 over three seasons with a 2.05 ERA. He was slated to be Orange’s top starter during his senior season before the pandemic ruined everything. Cooper, who is now a member of N.C. State’s club baseball team, was a frequent attendee to his brother’s games this season.