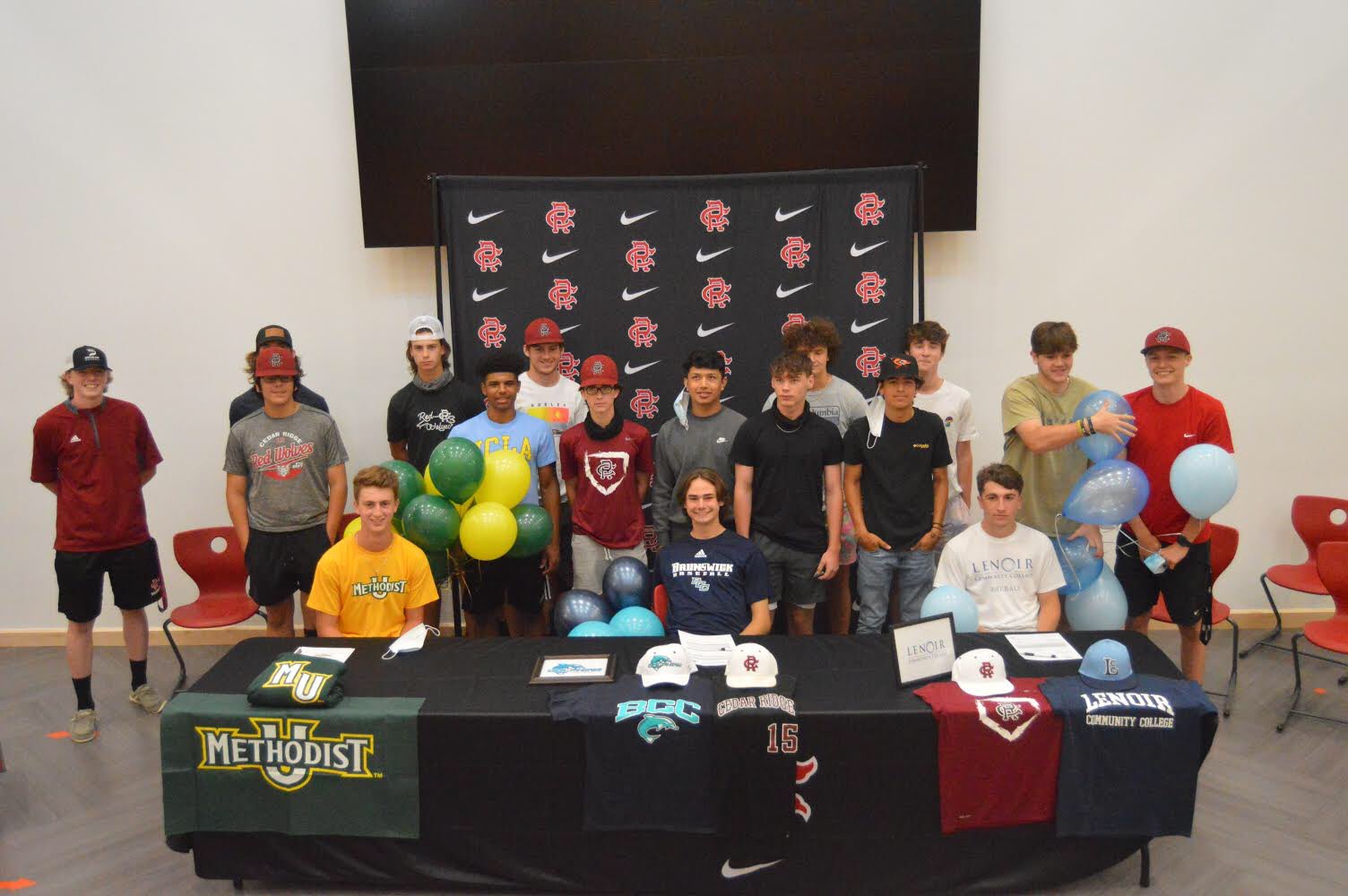 Just three days before Grady Ray, Bryce Clark and Matt Hughes graduated together inside Cedar Ridge Red Wolves Stadium, they gathered at the new J-Wing to sign their respective letters of intent. Ray will play at Division III Methodist University in Fayetteville. Clark will be at Lenoir Community College in Kinston. Hughes signed with Brunswick Community College in Bolivia, NC.

Both Clark and Hughes will be in Region X of the National Junior College Athletic Association.

The ceremony was held on Wednesday afternoon. Presiding over the event was Red Wolves Athletic Director Andy Simmons along with Principal Dr. Carlos Ramirez.

By the end of the day, Ray, Clark and Hughes played their final game together at Cedar Ridge High against Kernersville Glenn. When Ray took off his uniform for the final time on Wednesday night, it ended four years of service to Cedar Ridge athletics that spanned three sports. He played football as a freshman, but basketball and baseball were his loves. He’s played basketball since he was four years old, and was a member of the varsity Red Wolves for four years. Ray joined the varsity for baseball when Mitchell Frazier was the head coach of Cedar Ridge in 2019, and helped current coach Bryson Massey establish his presence in the program despite an interminable interruption caused by the COVID-19 pandemic last year.

Ray, the son of Jennifer and Warren Ray, played for the Sweponsville Sweepers of the Old North State League, a summer collegiate league. He’s also a member of Cedar Ridge’s International Baccalaureate Program and plans to major in, naturally, Exercise Science.

“I really like the school,” Ray said. “I’m really excited to play under Coach (Tom) Austin. Coach Massey was a huge part of this decision. I would talk to him after going to some camps. I looked at some different schools. He really helped me.”

Ray will now be conference rivals with the most successful pitcher in Cedar Ridge history. Phillip Berger, who won a school-record 21 games with the Red Wolves, just ended his sophomore season with William Peace University in Raleigh. Peace and Methodist are both in the USA South Athletic Conference.

Hughes, the son of Greg and Amy Hughes, started on the mound for Cedar Ridge in his final high school game. Like many members of the Class of 2021, Hughes had to deal with losing a substantial amount of time due to COVID-19. His junior season was limited to only two pitching performances. He opened 2021 with arm problems, which hurt Cedar Ridge’s pitching depth. However, he recovered to throw four scoreless innings against East Chapel Hill on June 4 in the most impressive stint of his Red Wolf career. Hughes struck out eight and scattered only one hit. Of 59 pitches he threw, 40 were strikes.

The Brunswick Dolphins, coached by Robbie Allen, was ranked #7 in the final NJCAA Division II Baseball Rankings on May 17. They finished the regular season 35-13.

“They have a winning tradition,” Hughes said. “I look forward to being a great pitcher for them.”

Hughes, who had other offers from various Division II and Division III schools, started playing baseball with the Hillsborough Youth Athletic Association when he was 5. He went on to Stanford Middle School before joining the Red Wolves. He plans to major in Arts.

“I’m going to remember all the great memories and the great teammates I had,” Hughes said.

In his freshman year, Hughes was on a team that went 18-6 and finished second in the Big 8 Conference with a 11-3 record. Cedar Ridge defeated Southern Alamance in the opening round of the 3A State Playoffs in Hillsborough.

Clark, the son of Brian and Stephanie Clark, is a study in perseverance. At the age of 14, his baseball career was at a crossroads when he underwent Tommy John Surgery. It cost him his entire freshman year and a large portion of his sophomore season.

“The doctors asked me if I wanted to quit baseball,” Clark said. “I decided to get the surgery and continue with it.”

Clark, a shortstop, says he didn’t get full strength back in his right arm until this season. He spent three years at Orange, including the 2020 season as the starting second baseman for all of four games before the pandemic. In those four games, he hit .429.

He transferred to Cedar Ridge last summer. Against Orange last month, he became the first player to hit a home run off Ryan Hench, the Panthers’ ace starting pitcher. It was the first run that Hench conceded in four starts.

With the Lenoir Lancers, Clark will play at historic Grainger Stadium, the longtime home of Kinston’s franchise in the Carolina League. He plans to major in Health Science.