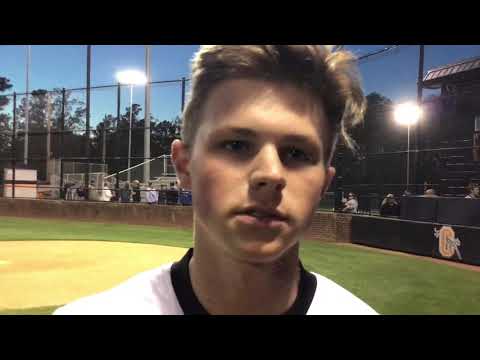 Joey Berini: Berini saw action for #12 East Carolina during its Super Regional series against #4 Vanderbilt at Hawkins Field in Nashville, TN. The Commodores swept the best-of-three series to advance to the College World Series in Omaha, NE. On Saturday, Berini entered the game as a pinch-hitter replacing Bryson Morrell. He flew out to right field. Berini played the 9th inning at shortstop. Berini also played in Friday’s game, a 2-0 Vanderbilt win, pinch-hitting for Ryder Giles. He grounded out to second base. The Pirates struggled against Vanderbilt pitching all weekend. ECU managed just three hits on Friday and two on Saturday. East Carolina ends the year 44-17. In his freshman year, Berini played 15 games for the Pirates. He hit .250, including an RBI single against Charlotte in the Greenville Regional on June 5. On May 13 against Cincinnati, Berini had a putout and three assists at shortstop. Berini will play summer baseball with the Asheboro Copperheads of the Coastal Plain League, who played its home games at McCrary Park.

Bryse Wilson: Wilson won his third game of the season for the Gwinnett Stripers of Triple-A East on Wednesday. The Stripers defeated the Memphis Redbirds 5-4 in a seven-inning game at AutoZone Park in Memphis. In five innings, Wilson gave up four runs off seven hits. He had one strikeout with one walk. In 79 pitches, Wilson threw 51 strikes. Wilson is 3-1 this season for the Stripers. Gwinnett entered Sunday’s game against Memphis with an 18-17 record.

Phillip Berger: The Elizabethton River Riders of the Appalachian League started its second full week of the season. On Wednesday, the Kingsport Axmen defeated the River Riders 4-3. Berger faced five batters. He threw one-and-one-thirds shutout innings with two strikeouts and one walk. On Saturday, Elizabethton defeated the Bluefield Ridge Runners 6-2 at Northeast Community Credit Union Ballpark to end a four-game losing streak. Elizabethton is 3-5. The River Riders will travel to Burlington to face the Sock Puppets on June 22 and June 23 at Burlington Athletic Stadium.

Jaden Hurdle: Hurdle was named to the Region X All-Academic team for the Patrick Henry Community College softball team. In her freshman season with the Patriots, Hurdle played 40 games. She hit .328 with ten home runs and 32 RBIs. She also made 17 pitching appearances with two starts. In the circle, Hurdle went 4-3 with a 4.61 ERA with 40 strikeouts and 17 walks. The Patriots finished 2nd in the Region X Western Division with a 13-7 record, one game behind Caldwell Community College and Technical Institute. Patrick Henry was 22-20 overall. Hurdle was a member of two Big 8 Softball Championship teams at Orange and started at first base as a freshman on the 2017 3A State Championship team.

After graduation ceremonies over the weekend, there will be some Cedar Ridge Red Wolves and Orange Panthers who will make their debut for Alumni Update this August. Congratulations to all of these graduates. Among them will be: