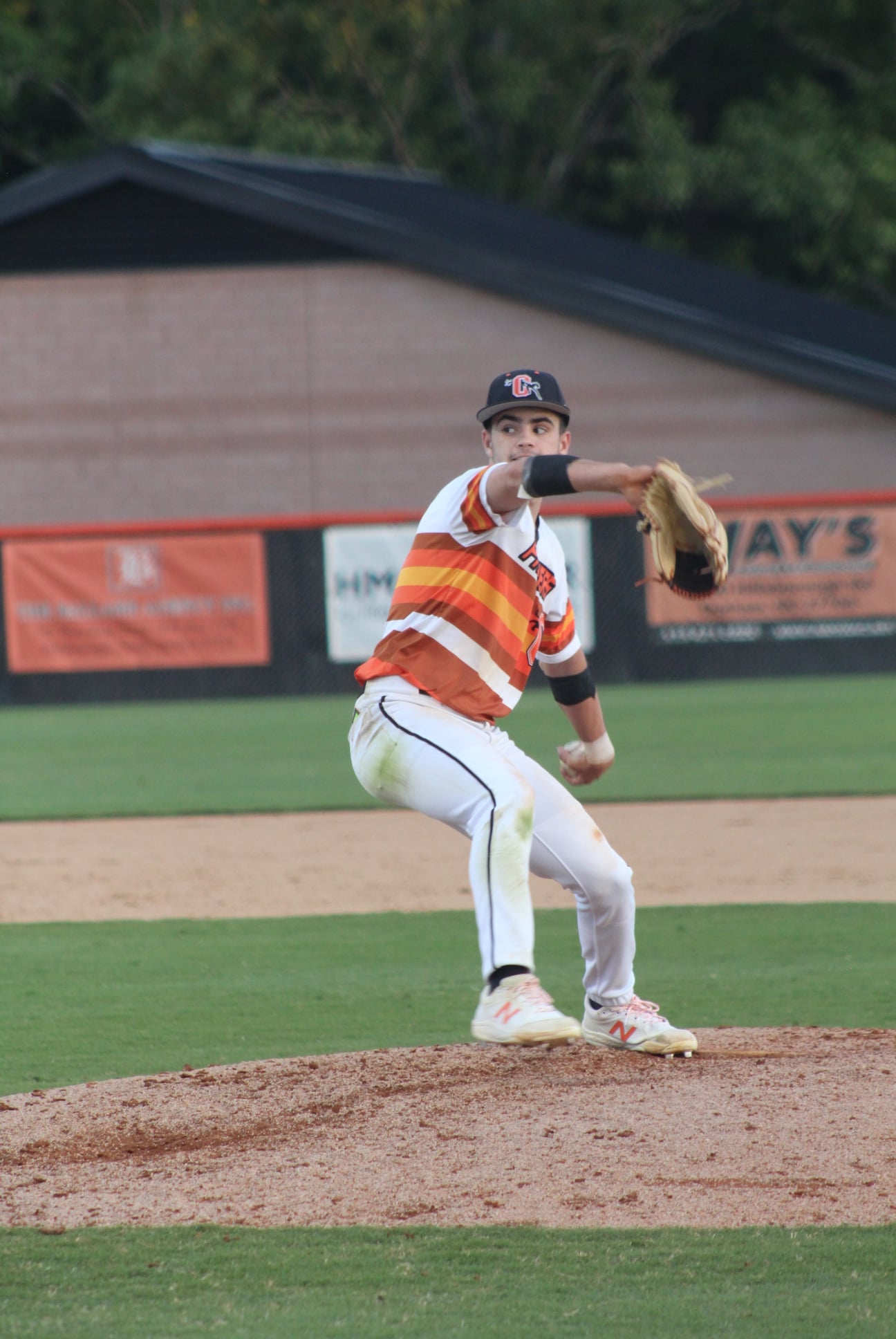 You haven’t lived until you’ve seen a ball thrown away at the Ronald Horton Baseball Complex at Northwood.

At most ballparks, there are fences along the first base line to help fielders whenever an errant throw gets past them.

There’s no fence at first in Pittsboro. There’s just a very big hill, which can lead to chaos on seemingly ordinary ground balls and two-to-three base errors more commonly than you would expect.

It’s also been a house of horrors for Jason Knapp.

Take 2019, for instance. In his first game against the Chargers as Orange coach, Knapp felt confident as his Panthers went into the bottom of the sixth inning with a 5-1 lead.

Then everything fell apart.

The Orange bullpen surrendered four hits and five walks in the final two innings. After trailing 5-3 in the bottom of the seventh, the Chargers scored three runs, including the game-winner of a bases-loaded walk, to escape 6-5.

It may have been bowling shoe ugly, but the Orange baseball team rode away from Pittsboro much happier on Tuesday night.

In a game with a combined 12 errors, the Panthers rode the strength of its offense and sophomore starting pitcher Ryan Hench to a 9-4 win at the Ronald Horton Baseball Complex on Tuesday. Hench allowed only one run off two hits with six strikeouts.

Senior centerfielder Jaren Sikes drove in the Panthers’ first run, scored by Hench, off a triple to left field in the bottom of the second inning off a fly ball hit over the head of left fielder Nate Ortiz.

Orange catcher Davis Horton extended his hitting streak to twelves games with an infield single in the seventh inning. Horton, who started the streak with two hits against Southern Nash during his freshman year at Riverside in 2019, also had a sacrifice fly in the 3rd inning for his team-leading 14th RBI of the year.

It was Orange’s first win at Northwood since 2016, when Bryse Wilson was a senior.

“Anytime you can come down here and get a win, it’s a good thing,” Knapp said. “It’s a tough place to play, but it was an ugly game on our part. I’ve been coming down here since 2000, and every time I come here, it’s tough. The score wasn’t indicative of how hard Northwood fought. Coach (David) Miller has done a great job and they’ve improved a lot since the first time we met.”

Northwood shortstop Mason Bae struck first after being drilled on the second pitch Hench threw. Catcher Luke Smith blooped a single to shallow centerfield, and Bae went to third went the ball got past an outfielder. After sophomore third baseman Zach Barnes walked to load the bases, Ortiz reached on a throwing error to score Bae.

Following Sikes’ double in the second inning, Orange took the lead with three runs in the third inning. Tyler Lloyd drew a leadoff walk, followed by a liner to right field by Jackson Berini. Junior David Waitt doubled down the left field line to score Lloyd. Berini came in next off Horton’s sacrifice fly. With two out, Will Walker drove in a single to left field to plate Waitt.

Third baseman Cesar Lozano, who has been precipitously close to a home run throughout the season, nearly parked a fastball over the left field fence to leadoff the third. Instead, it one-hopped the wall and Lozano settled for a double. After Sikes walked, Lloyd laid down a bunt that was thrown into right field by the pitcher, and Lozano scored the first of several unearned Orange runs.

Sikes moved to third base off a Berini sacrifice bunt, which led to Twitter-caliber comedy. Waitt hit a fielder’s choice to Barnes at third base, who caught Sikes in a rundown at the plate trying to score. Sikes ran back to third, only to find Lloyd standing at third. Lloyd, who was nearly called out for sharing the same base, dashed to second. Sikes wound up being safe at third, and Northwood’s attempt to nab Lloyd during his retreat to second wound up with the ball thrown in the outfield. That allowed Sikes to score to put Orange ahead 7-1.

Following his 7th inning single, Horton ran for himself (usually Jacob Jones serves as his courtesy runner). After a errant pickoff to the death area at first, Horton took second and advanced to third on a wild pitch. Horton, who has started every game, would score his second run of the year off a sacrifice fly from Walker to centerfield.

Despite scoring nine runs, no Panther had a multi-hit game. Sophomore Joey Pounds recorded the final two outs, including taking care of a bunt by Andrew Johnson on the last play of the game. He also had a strikeout.

Orange will host Chapel Hill on Friday night at 6 for its final home game of the year.