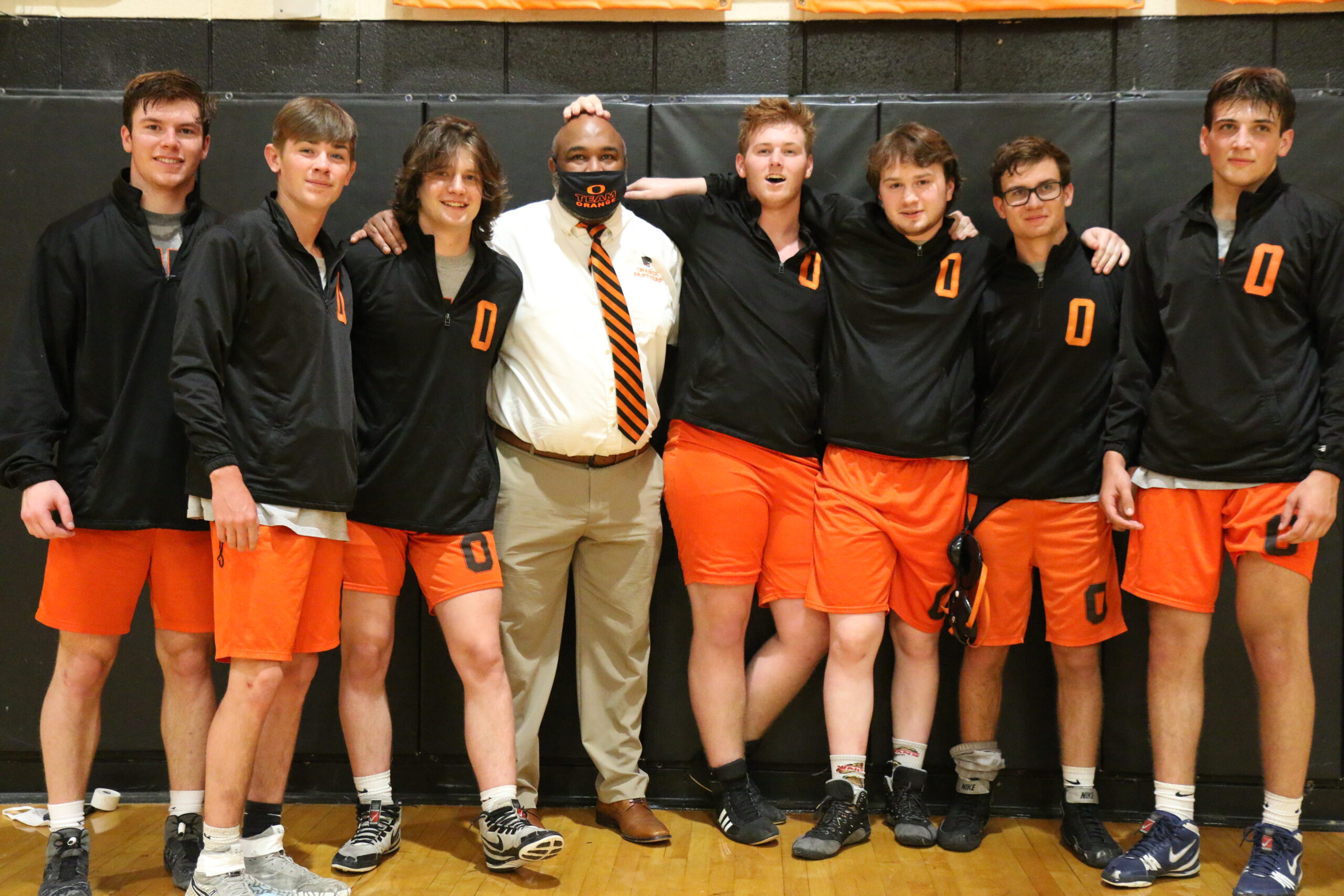 The Orange wrestling team will end its stint in the Big 8 Conference the same way it left the 4A PAC-6, the 3A Five County, the 3A Carolina and the 2A/1A Mid State.

As a conference champion.

A year after its string of 16 consecutive conference championships came to an end at the hands of Chapel Hill, the Panthers defeated the Tigers 45-22 at newly renovated Tiger Gymnasium on Tuesday night to win the 2021 Big 8 Championship. With the win, Orange concludes its stay in the Big 8 Conference with a cumulative record of 52-1, dating back to the league’s formation in 2013-2014.

“The coaches are happy for these seniors to close with a conference championship,” said Orange wrestling coach Spenser Poteat, who secured his third conference title as a head coach. “This team has been working really hard and it was good to see that pay off. Our guys wrestled well tonight and were excited to compete.”

Last year in the regular season finale, Orange led Chapel Hill 30-16 going into the final three matches before the Tigers scored two pins and a major decision to pull off a stunning 32-30 victory to take the conference crown on Orange’s senior night.

“I think after a while you get into a mindset where you expect to win,” Poteat said. “Once we lost last year, it gave us something to work that much harder for.”

On Wednesday, the Panthers won its share of bonus points to reassume its spot on the throne.

The most tense bout of the night came at 220, where senior Hayden Horne went to overtime with Bryan Ramirez. In the first sudden victory round, Horne gained an escape point to win 8-7. It vaulted the Panthers into a 15-0 lead after Chapel Hill forfeited at 182 and 195 pounds (which were wins for Brendon Worsham and Elliott Woods). Horne, a starting right tackle in football who will attend East Carolina this fall, improved to 8-0 on the season.

After Chapel Hill won via forfeit at 106 pounds, Orange’s Dillon Heffernan scored his third pin of the season, finishing Jay Huang in 32 seconds.

Orange’s Kessel Summers, who captured his 100th career match earlier this month, defeated Chapel Hill sophomore Porter Brice 8-5 at 138 pounds. Last year, Brice scored the pin in the final match to win the championship for the Tigers. Summers is 13-0. It was the first time this year he’s been extended to a decision victory.

Senior Henry Joubert-Stanzel ended the dual match with a pin of Chapel Hill’s Danny Miranda in 2:26. Joubert-Stanzel, who was a member of two Orange-Person Athletic Conference championship teams at Stanford Middle School, leads the squad with six pins this season. He is 11-0.

“Henry has been working hard,” Poteat said. “He’s been helping out his other teammates. We’ve been doing a good job on focusing on a team instead of being individuals. I think that’s helped out everybody in the long run.”

Against Jordan, Orange had seven forfeit wins. In contested matches, Horne pinned Pablo Araujo Cruz in 2:57. Summers, who has qualified for the 3A State Championships twice, pinned Riley Daughtry in 1:40. At 138 pounds, Avery Clark pinned Landus Robertson to improve to 10-3. It was Clark’s third pin of the year.

Since the North Carolina High School Athletic Association isn’t holding a state dual tournament this year, the Panthers will now try to finish the season undefeated. They have six matches remaining this season, starting with a tri-meet against Bartlett-Yancey and Walter Williams on Tuesday.

The 3A Mideast Regional Championships will be held at Eastern Guilford High School in Gibsonville. The Greensboro Coliseum will host the State Championships.