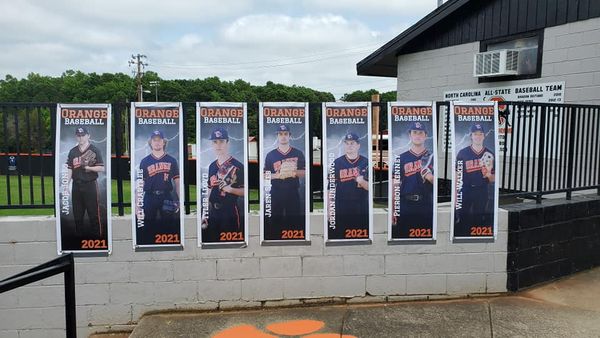 A game of kickball.

Following a 8-7 loss to East Chapel Hill on Friday, Knapp didn’t have a weekend of leisure. There were a couple of sleepless nights instead, paired along with nine-hour shifts at his Orange baseball diamond that remains in meticulous shape. As he mowed the grass during a sunny Saturday, Knapp pondered ways to shore up his team’s base running flaws that led to some costly outs against Northern Durham and East. So during practice Monday, he took his players back to their days of running across blacktops and playgrounds at various elementary schools.

Whatever it was that unfolded in practice Monday, a composed and relaxed Orange team turned in its most complete performance of the season in an 7-0 victory over Walkertown on Tuesday night at Panther Field. Senior Will Walker had his best night of the season, going 3-for-3 with a double and 3 RBIs as Orange (7-3) ended a three-game losing streak.

What impressed Knapp more was his pitching staff, who turned in the second shutout of the year. Jordan Underwood, in his first start of the season, earned the win after he threw the opening two innings. Pierson Kenney, in his team-high seventh pitching appearance, had his best outing of the year. Over three scoreless innings, Kenney conceded just one hit and one walk.

“A lot of guys contributed tonight,” Knapp said. “We got it done on the mound. It’s great to see (Jordan) Underwood get a start. Pierson (Kenney) looked real comfortable coming in out of the bullpen. Jaren (Sikes) just continues to get better. That’s how we had it mapped out tonight.”

It was an impressive win over a Walkertown (6-3) team that had not been shutout this season. The Wolfpack, from the 2A Western Piedmont Conference, defeated West Stokes on May 11. Three night later, Stokes edged Orange in Hillsborough.

Underwood got help from his defense early. After Walkertown leadoff batter Luke Tucker was hit on the first pitch of the game, Panther shortstop Jackson Berini triggered a 6-4-3 double play on the next Wolfpack at-bat, as he flipped a grounder to Connor Funk, who threw to Walker on the relay.

Orange’s David Waitt scored Orange’s first run. Waitt got aboard after being hit on the lower leg by a pitch. Catcher Davis Horton extended his hitting streak to eight games with a single to centerfield. After Waitt advanced to third on a wild pitch, Walker lined a first-pitch fastball to left field to bring in Waitt. Jacob Jones, running for Horton, went to third after Ryan Hench was walked. Lozano, taking every inch of the plate allowed, was hit by a pitch to score Jones for a run battered in.

“I love that out of him up there,” Knapp said of Lozano. “He’s just trying to find a way on. He’s really worked hard in practice and really proud of the effort he’s put in.”

Walker drew a two-out walk in the third inning. Hench sent a hard liner to the deepest part of the park in right center, an abyss for fielders. Walker scored all the way from first. It was Hench’s seventh RBI of the year.

Centerfielder Jaren Sikes led off the fourth with a single to centerfield. After stealing second, Berini sent a hard grounder to right for his first hit. It led to Horton lining a double into the abyss to score Berini and Sikes. Horton leads the team with 13 RBIs.

Orange pushed two more across in the seventh inning. Horton drew a walk, following by a stellar bunt single by second baseman Connor Funk down the third-base line. Walker nearly sent a 2-2 slider over the left field fence, but it bounced over for a two-run ground rule double.

It was Underwood’s first win since last season when Orange defeated Eastern Alamance in Mebane.