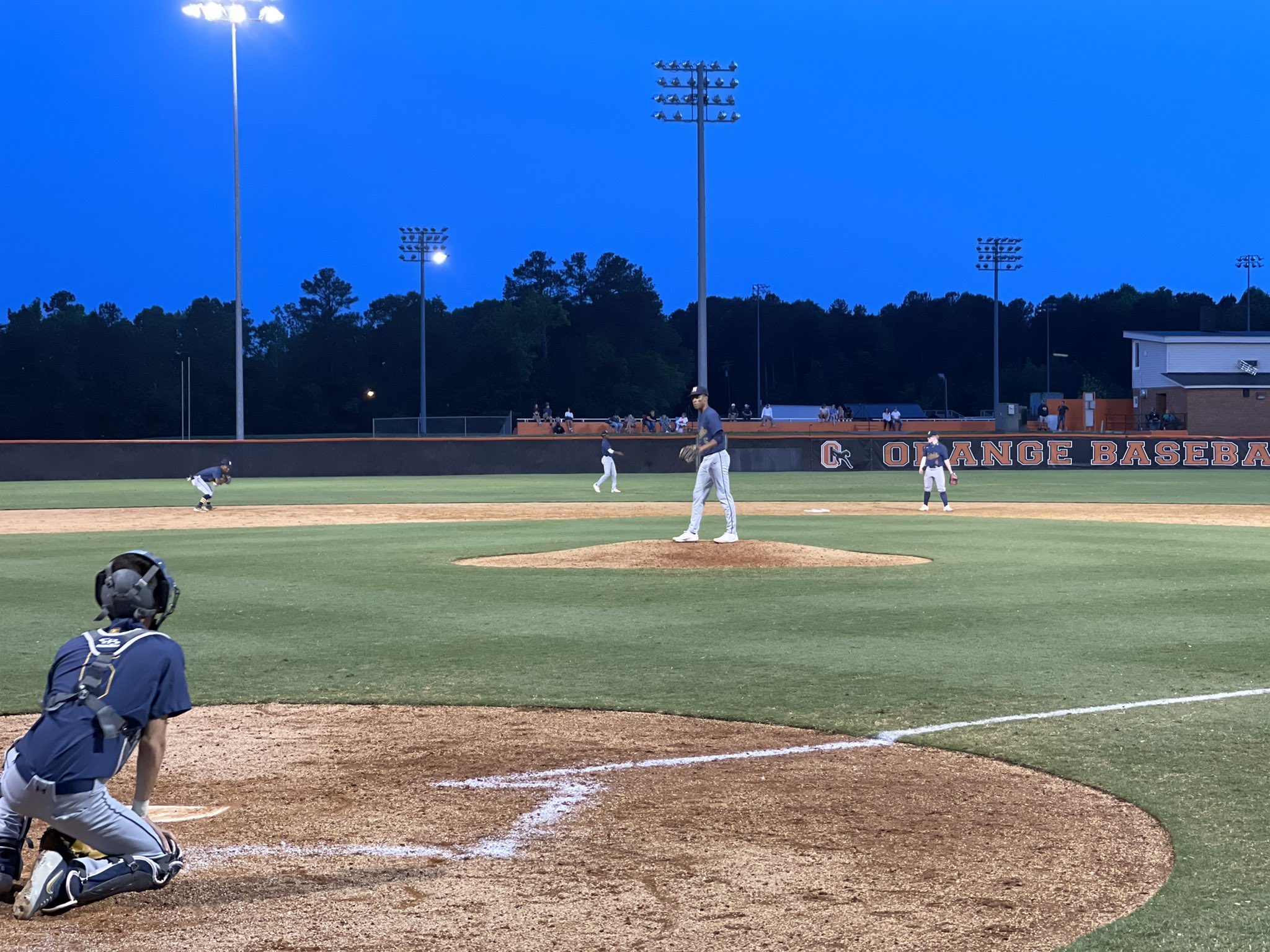 The electric atmosphere inside Orange High ballpark on Tuesday night wasn’t simply the standard vibe of a must-win game. It was the release of pent-up frustration by Northern Durham fans that had been withheld for years.

When the time is right, Northern baseball fans can created an electric atmosphere around its aging ballpark. It’s just been a long time since the time was right. About six years, to be exact.

The last time Northern Durham clinched a share of a conference championship in baseball, it was 2015. That was when Northern suited up a leadoff hitter named A.J. Bumpass, who would go on to play at the University of Cincinnati and eventually with the Cincinnati Reds organization. It was six years ago today that the Knights defeated D.H. Conley in Greenville to advance to the 4A State Quarterfinals.

It may be another six years before the throng of fans who gathered around the fences at Orange High Field on Tuesday see as brilliant a pitcher’s duel like the one they saw Tuesday.

In a game to decide the #1 seed from the Big 8 Conference, neither Northern Durham senior Matthew Lombard nor Orange sophomore Ryan Hench would give in. They each threw six scoreless innings. They each registered eleven strikeouts.

Ultimately, Hench was pulled after he logged 100 pitches after six innings (the North Carolina High School Athletic Association institutes a limit of 105 pitches for any pitcher). When Hench left the game at the beginning of the seventh inning, it was all the latitude the Northern batters needed. The Knights struck for four runs in the seventh inning to beat Orange 4-0.

With the win, Northern (7-1, 7-1 in the Big 8 Conference) ensured they would share the Big 8 Championship with Orange. The Knights, who lost to Northwood last Wednesday, will be the #1 seed from the Big 8 in the state playoffs, which starts next month.

Orange (7-2, 7-1 in the Big 8) will still make the state playoffs and will claim a share of a conference title for the first time since 2016, Bryse Wilson’s senior year. But the Panthers will almost certainly travel for the opening round of the playoffs.

It was the Knights’ first win over Orange since March 8, 2017, ending the Panthers’ four-game winning streak in the series. Northern also clinched its first winning season since 2016.

“That’s as fine a high school pitching matchup as you’ll see at this level,” said Orange Coach Jason Knapp. “I was just talking about this with (assistant coach Matt) Roberts.”

Hench was at 100 pitches by the time the seventh inning rolled around, but Knapp elected to pull him in lieu of throwing to one more batter. In six innings, Hench (2-0) conceded only two hits and four walks.

After Northern got to Orange’s bullpen, the Knights scored four runs off four hits in the seventh inning alone. Corbyn Poe opened with a leadoff walk, then stole second base. Seth Lumpkin hit a dribbler to left field for a base hit to move Poe to third. With Orange’s infield drawn in, Charles McDowell drilled a 1-0 fastball to left field to break the stalemate. After Knights’ leadoff batter Caleb Greene was intentionally walked, catcher Riley Adams lofted a soft pop-up to second base that would have been caught if the infield was at normal depth. This time, it went over Connor Funk’s head and allowed Lumpin to score.

Orange had its chances early. They loaded the bases with one out in the first inning after sophomore Jackson Berini led off with a single. Funk reached off an error. Each man moved up 90 feet following a wild pitch with Davis Horton at the plate. But the story of the game was Lombard’s power, most prominently a fastball that reached 88-miles-per-hour. Lombard struck out Horton, Orange’s most consistent hitter, with one out. After Will Walker walked to load the bases, Lombard struck out Hench, then forced David Waitt into a groundout back to the mound to escape the frame.

Orange loaded the bases again in the third inning. Berini led off with another single. Horton lined a fastball off the leg of Scoggins at 3rd base. That would be the final Orange hit of the game. After Hench walked to load the bases with two out, Waitt popped out to Lombard.

Lombard started against Chapel Hill on Friday, a game that Chapel Hill led 3-0 going into the bottom of the sixth inning. Despite having just four days rest, fatigue was not a factor for Lombard, who only conceded three walks in his final three-and-two-thirds innings of work. After Lombard eclipsed 105 pitches following a strikeout of Funk, Northern first baseman Jackson Bishop relieved Lombard and got the final out.

It was the first time Orange was shut out since losing to Wilson Fike 6-0 at Fleming Stadium on March 23, 2019.

None of which should overshadow the outstanding performance by Hench. In only his third career start for Orange, Hench allowed just one Northern batter to reach third base through six innings.

With the second half of its season starting Friday afternoon at East Chapel Hill, Knapp knows his postseason fate with six games (possibly more) still remaining in the regular season. He knows he will go to the state playoffs, regardless of what his team’s final record is. Now, he’ll focus on trying to revive an offense that scored 15, 19 and ten runs in its opening three games, but has been limited to only five in its last two Big 8 games.

“We’re going to come up with some team goals tomorrow that I’ve already been thinking about,” Knapp said. “It’s going to be good because the majority of our games during the last half of the season are on the road. So that’s going to be good to prepare us for the playoffs.”