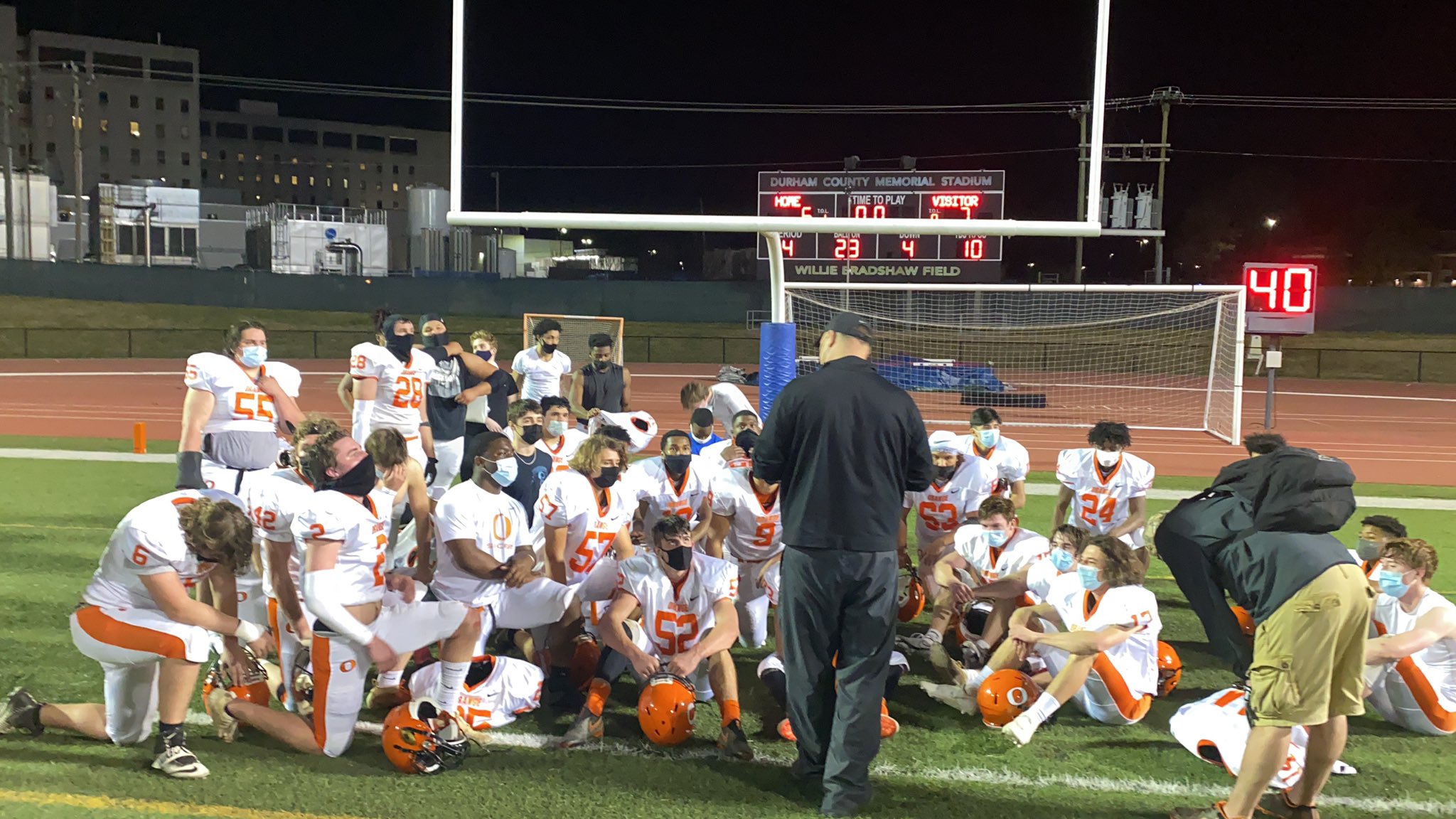 Last year, Northern coach John Hammett, after losing starting quarterback Kyle Barnhill against Southern Durham, installed a wishbone offense in time for its game against Orange. With converted wide receiver Caleb Steele at quarterback, Northern piled up a season-high 285 rushing yards on an unsuspecting Panther defense in a 31-14 victory in Hillsborough.

Fast forward 18 months. Coming off a 20-0 loss to Southern Durham last week in its season-opener, Orange learned Monday that starting quarterback Nigel Slanker would miss the Northern game with a back injury.

Orange coach Van Smith and his assistant decided it was time for a crash course in the wishbone. Senior Jayce Hodges, who ran the offense as quarterback at Stanford Middle School, would be the conductor.

Part of the reason for the change was to simplify things. The previous week against Southern Durham, the Panthers lost 36 yards in botched shotgun snaps that went over Slanker’s head. Orange finished with a paltry 65 yards total offense.

On Friday night, Orange’s step back to basics led to the end of its two-game losing streak against Northern Durham.

“We just wanted to get the quarterback under center,” Orange Coach Van Smith said. “We had so many snap issues last week. It was a good idea by (offensive coordinator) Marty Scotten and the assistants because we didn’t have a single fumble on a quarterback-center exchange tonight. Jace knew the plays we were running. It was just a minor adjustment to run the same plays under center instead of from shotgun.”

The Panthers chewed up plenty of clock and scored its only touchdown midway through the second quarter. Hodges, who attempted three passes all night, found Woods on a 4th-and-10 for a 12-yard gain to push the ball into the red zone. After fullback Jackson Wood rumbled up the middle for 15 yards, Woods scored off a fullback dive. Satterfield’s extra point was the final one of the game.

Northern’s first two drives in the second half ended without first downs. After Orange failed to convert a 4th-and-3 at midfield, it appeared that Orange cornerback J.J. Torres stripped the ball from Northern running back Jaylon Chestnut, and linebacker Connor Ray recovered. But the officials ruled Chestnut down. Orange ended the drive anyway when Hodges tackled Northern’s Bryant Jones on a 3rd-and-8 for a one-yard gain, followed by a Barnhill incompletion after being pressured by Will Torian.

During a punt before its final drive, Northern committed a costly personal foul penalty that put the ball back at its own 26-yard line, its worst starting field position of the game. Grizzle sacked Barnhill, who shook it off and found Chestnut two plays later for a first down.

Steele, who didn’t touch the ball for the meat of the game after his touchdown, finally made a grab to cross the 50-yard line. On 2nd-and-15, Wood pressured Barnhill into a hasty throw that was nearly picked off by Woods. Orange thought they had won the game with 26 seconds remaining when Ray knocked down a pass intended for Steele, but was whistled for pass interference.

On first-and-10 at the Orange 22-yard line, Wood batted the ball down in front of Barnhill. On second down, Woods knocked Barnhill down from behind for another incompletion. With 4.2 seconds remaining, Barnhill’s desperation heave was knocked down by Hodges and Torres in the end zone, leading to an well-earned Orange celebration.

“Our players felt confident because they kept thinking the only thing stopping us was ourselves,” Smith said. “It’s good when these players have that confidence in themselves and each other.”