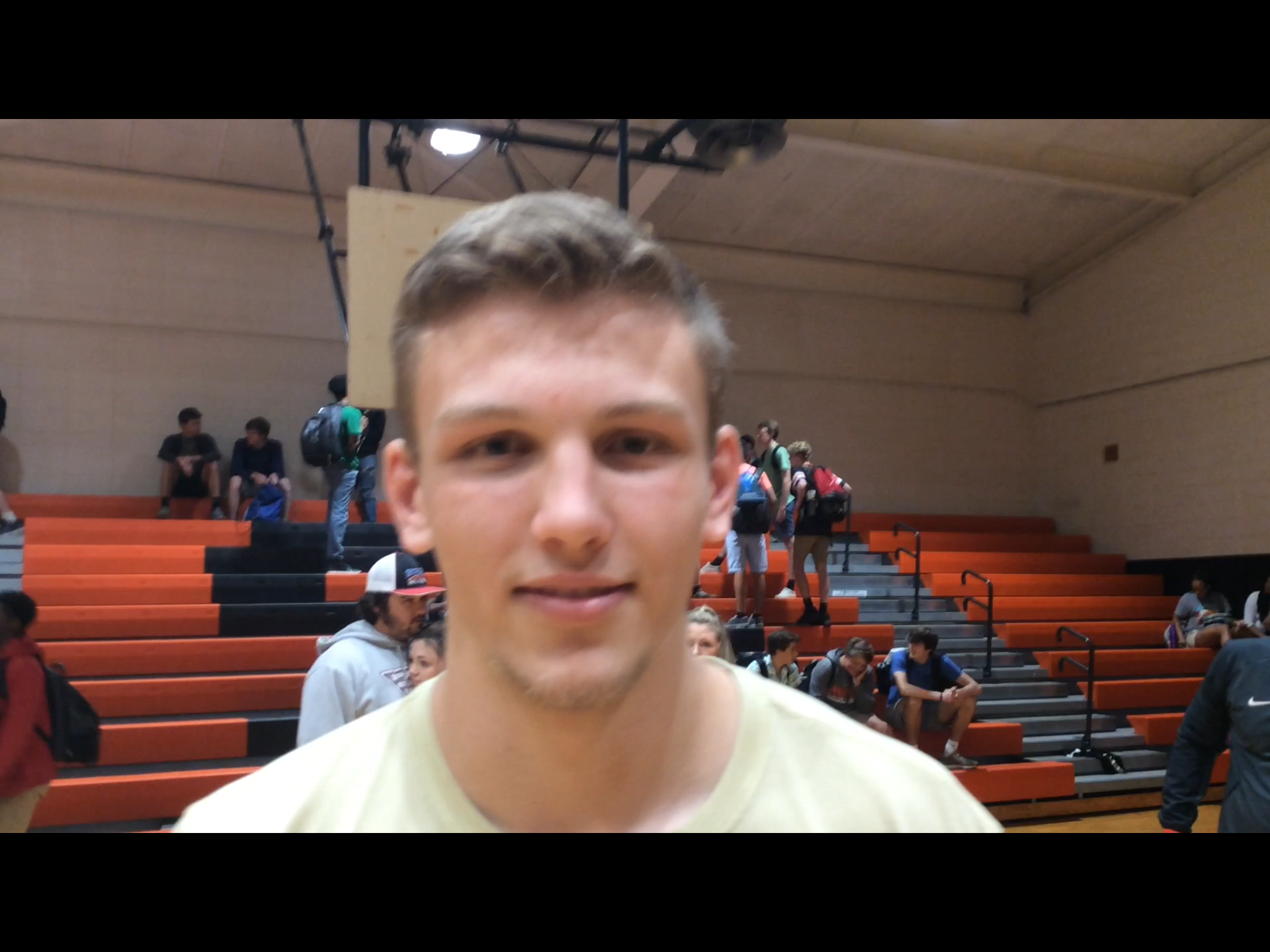 Braden Homsey: Now a junior for the Ferrum College wrestling team, Homsey competed in the National Wrestling Coaches Association Division III Championships at Xtreme Arena in Coralville, Iowa on Friday. Wrestling at 197 pounds, Homsey opened with a 16-1 technical fall victory over Greensboro College’s Khalil Belk. In the round of 16, Homsey dominated Scott Anderson of Elmhurst 12-2. In the quarterfinals, Cody Baldridge edged Homsey 3-2. In the consolation round, Logan Hagerbaumer of Millikin University defeated Homsey 13-9. Ferrum’s schedule was greatly impacted by the pandemic with only two dual matches. On February 6, Homsey won his senior night match against Shenandoah via forfeit. Homsey ended the year 6-2.

Adam Chnupa: After nearly upsetting the #1 ranked team in the Football Championship Subdivision on March 6, the Elon football team had a disappointing 38-14 loss to Richmond at Rhodes Stadium on Saturday. Chnupa had a tackle for the Phoenix, who fell to 1-3, 0-2 in the Colonial Athletic Association.

Bryse Wilson: In his second spring training outing for the Atlanta Braves, Wilson threw three innings against the Pittsburgh Pirates last Tuesday at CoolToday Park in Sarasota, FL. He surrendered two runs, both earned, on four hits. Wilson struck out four and walked one in a no decision. Pittsburgh took a 10-1 win.

Phillip Berger: The winningest pitcher in Cedar Ridge history started for Division III William Peace in a 3-2 loss to Brevard in the second game of a doubleheader on Friday. He faced 18 batters over four innings with six strikeouts. He surrendered two runs off four hits in a no decision. Peace is 8-7 at will open play in the USA South Athletic Conference against Pfeiffer on Thursday.

Cooper Porter: The former Orange High utility man continues to play for the Pensacola State Pirates. In a doubleheader against Delgado Community College on March 6, Porter went 1-for-4 in a 9-2 loss for the Pirates. Porter started at 2nd base in the nightcap, which Pensacola won 2-1. Porter went 0-for-2. Porter has played in six games for Pensacola State.

Montana Davidson: Montana started both games at third base for Mississippi State against Ole Miss. She went hitless on both days. The Bulldogs are 15-7, 0-2 in the Southeastern Conference.

Tori Dalehite: The UNC Greensboro softball team opened Southern Conference action by taking the series against the College of Charleston at UNC Greensboro Softball Stadium over the weekend. Dalehite was a pinch runner in the opening game of Saturday’s doubleheader, a 9-1 Spartan victory. UNCG has now won 10 of its last 11.

Grace Andrews: Once again, Andrews faced her former Orange High teammate Jaden Hurdle when Andrews’ Catawba Valley Community College Red Hawks faced Patrick Henry Community College at Highland Recreation Center in Hickory on Sunday. Catawba Valley swept the doubleheader. In the second game, Andrews drilled a two-run homer to left center in the second inning, her fourth dinger of the year. Andrews opened the game with a sacrifice fly RBI to score leadoff batter Ashlyn Parsons. Andrews went 2-for-3 with 3 RBIs and two runs scored in a 17-8 win. The Red Hawks also took the opener 6-5, where Andrews went 0-for-3, r-3, but she knocked in Parons on another sacrifice fly in the 5th inning to put the Red Hawks ahead 3-2.

On Saturday, Catawba Valley swept Surry County Community College 5-1 and 11-3 in six innings in Hickory. In the opener, Andrews went 2-for-3 with an RBI in the third inning. Andrews also doubled in the first inning. In the nightcap, Andrews finished 2-for-3 with an RBI. In the first inning, Andrews singled to third to score Alleigh Himes. After she reached on a fielder’s choice in the third inning, Andrews scored on an error. In the fifth, Andrews singled to left. Catawba Valley has won six in a row and is 12-5 overall, 5-2 in Region X of the National Junior College Athletic Association.

Jaden Hurdle: Hurdle started at first base for Patrick Henry Community College in the opener against Catawba Valley on Sunday.

Dylan Boyer: The Division II Queen’s University men’s lacrosse team dominated Mars Hill 20-12 at Mears Stadium in Mars Hill on Saturday. Boyer assisted on three goals for the Royals, who have beaten the Lions five straight times. Boyer also had two shots, both on net. Queens improves to 3-2, 3-0 in the South Atlantic Conference.