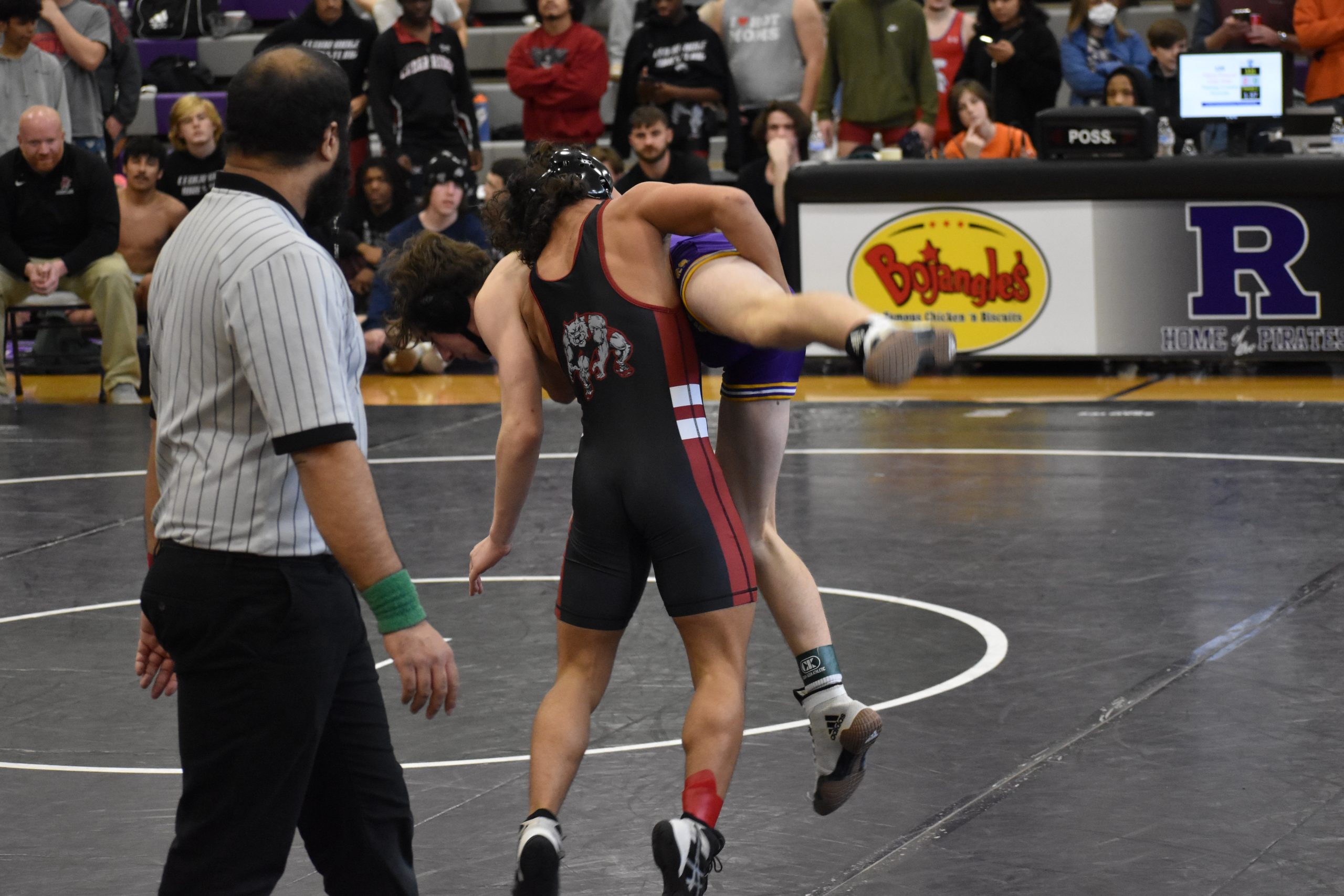 There wasn’t quite the sense of finality for the Cedar Ridge wrestlers that they would have ordinary felt on Senior Night.

In two weeks, Cedar Ridge will host dozens of schools for the 3A Mideast Regionals. One Red Wolf senior, Fernando Martinez, will be defending his regional championship at 113-pounds.

Nonetheless, for Martinez, Nick Meyer, Jalen Williams, Justin Hartsell, Gavin Mintz, and Louis Tedder, it was their final dual match at Cedar Ridge High School. Together, they’ve helped the Red Wolves bridge from the Big 8 Conference into the Central Carolina Conference. They’ve reached the brink of qualifying for the Dual State Tournament playoffs this year, finishing 3rd behind Orange and Person.

For Martinez, it was a poignant moment as the Red Wolves defeated Eastern Alamance 66-12 inside Cedar Ridge’s Auxiliary Gymnasium on Thursday night. The most successful Cedar Ridge wrestler since Josh Collins, who won 151 matches from 2001-2005, Martinez earned a pinfall victory over Kaitlyn Watson in 41 seconds at 113 pounds for his final victory as a Red Wolf in a dual match. Martinez now is in third-place in career wins at Cedar Ridge with 135. He has an outside chance of catching Collins for second-place at 151 career wins.

Martinez and Tedder have been teammates for six years going back to their days at Stanback Middle School. Tedder, a heavyweight who also played football this season, improved to 24-16 after he pinned Noel Jennings in 34 seconds.

“I’ve grown to have a great relationship with my coaches,” Martinez said about his time at Cedar Ridge, where he has started since he was a freshman. “Aidan Kearns and a couple of those guys have been on the team for a long time. So the relationship with them over the years has been pretty awesome. I’ve developed my skills in this room.”

All four of the Red Wolf seniors claimed wins in their final dual match. In addition to Martinez and Tedder, Williams claimed a forfeit win at 126 pounds. Justin Hartsell pinned Aidan Clark in 5:11 at 152 pounds. Hartsell improved to 23-16 with 13 pins.

Kaden Tatro notched his team-leading 46th win of the season with a forfeit at 182 pounds. Angus Pritchard and James Este-Wittinger also had forfeit victories for the Red Wolves.

Cedar Ridge ended its dual season with an overall record of 24-11, 4-2 in the Central Carolina Conference.

This afternoon, Cedar Ridge will join the other six teams for the 1st annual Central Carolina Conference Tournament at Orange High School. The first match begins at 10AM.

Orange, the regular season champions of the Central Carolina Conference, will have Acoya Isley as the favorite at 195 pounds. Isley was the runner up at the Tiger Holiday Invitational in December at 195.

Cedar Ridge’s Pierce Prescod will compete at 120 pounds. Prescod, a sophomore who claimed the individual championship at the Silver Fox Invitational at Riverside High last week, is 39-9 for the Red Wolves. Orange’s Quadir Medley is also a contender at 120 pounds.

Kaden Tatro also claimed an individual championship at the Silver Fox at 182 pounds. Tatro went undefeated against conference opponents this season. Ethan Kuball of Northwood and Malakai Newman of Person may be Tatro’s main challengers.