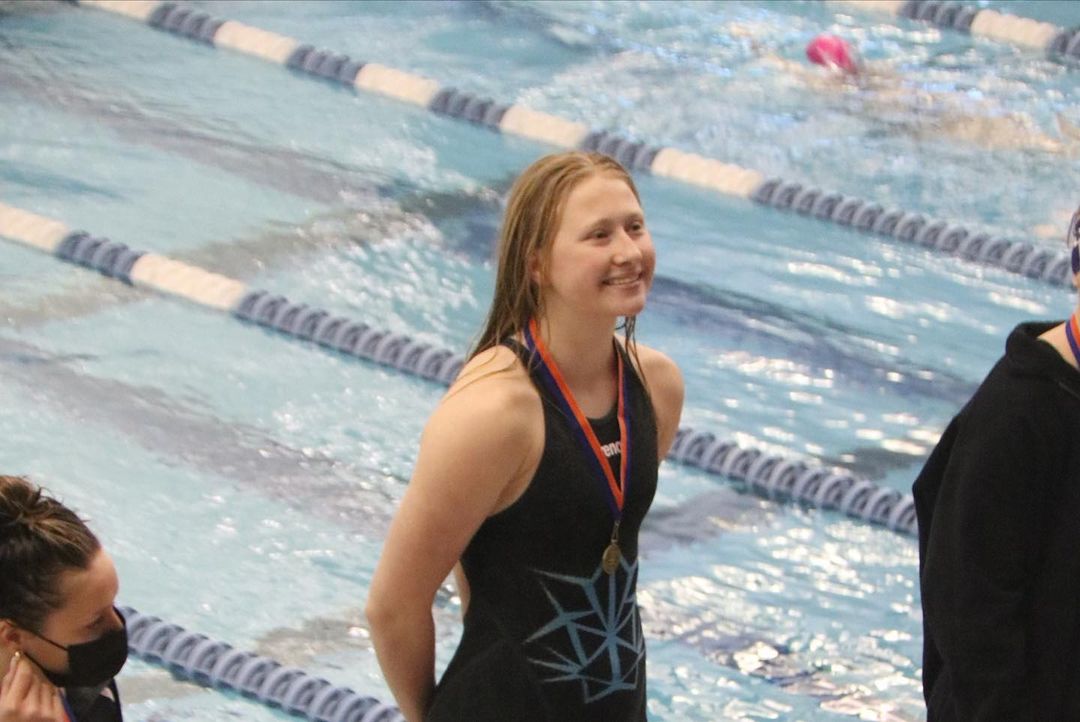 Katie Belle Sikes has spent a significant portion of her life under water.

From the time she was in third grade, Sikes has been a daily fixture in the pools of the Orange County Sportsplex. Day after day of practice with the Orange Panthers swim team and the Hillsborough Aquatic Club has lead to her becoming the #1 ranked female sophomore swimmer, private schools included, in the state of North Carolina.

Now, Sikes’ goal of becoming the first Orange High swimmer (regardless of gender) to win a state championship is in clear focus after a successful regional weekend in Greensboro.

After winning the 50-yard freestyle regional title in 2021 as a freshman, Sikes captured two regional championships at the Greensboro Aquatic Center on Saturday in the 3A Central Regional Championships. In the 50-yard freestyle, Sikes repeated her championship by touching the wall at 23.63 seconds. Carrboro’s Lindy Bilden came in second at 24.45. Northwood’s Julia Earnshaw, who lost to Sikes by just nine-hundredths-of-a-second in the Central Carolina Conference championships on January 27, came in third.

Sikes earned her 3rd career regional title in the 100 yard freestyle. Sikes finished at 51.66 seconds, holding off Carrboro Kate Hegland, who came in at 51.84 seconds.

“I’m incredibly proud of how well our team did and how supportive we are of each other,” Sikes said. “I was very excited going into this meet as it was my first ‘large-scale’ normalish meet. I was also excited to be joined by most of my team, which is all because of my incredible coach, Ron Geib.”

The only Orange aquatic state champion in school history came in 1999 and 2000, when Jennifer Rehm won the 4A State Diving Championship. In 1999, Rehm finished with 474.65 points to claim the first swimming or diving championship in Hillsborough history. The following year, Rehm repeated her title with a total of 458.60.

The last state swimming championship came from Cedar Ridge High School when Becca Churchill won the 2014 3A State Championship in the 100 yard breaststroke.

Following an undefeated regular season in dual matches, the Orange men’s swimming team finished 2nd in the Central Regional team competition, the best finish in program history. The Panthers, who won the Central Carolina Conference championship, finished with 301 points. Carrboro had 380 points to come in first.

The women’s team, which had six ladies competing, finished in third place, another program best. Carrboro finished first with 460 points while Northwood, the CCC championships, was runner-up at 337 points.

The Orange men had nine competitors qualify for the state championships, which will take place on Friday at the Triangle Aquatic Center in Cary.

While Cedar Ridge had several competitors qualify for regionals, eight swimmers tested positive for COVID-19 and were unable to travel to Greensboro. Only one Red Wolf swimmer, freshman Phillip Cauwels, wound up in the water. Cauwels finished 12th in the 200 yard freestyle.

In addition to Sikes, four individual female swimmers qualified for the state championships. There were also two women’s relay teams and two men’s medley relay teams who will compete in Cary next Friday.

In the 200 yard freestyle relay, Sikes teamed with McCouch, Wileman and Campbell to finish 2nd at 1:47.19. Carrboro won the regional title.

Roman also qualified for the state championships in the 500 yard freestyle with a fourth place finish. Alexandre Andre, an Orange freshman, came in 5th.

In the 100 yard breaststroke, Orange junior Evan Phillips came in second at 1:05.07. Aaron Reyes of Atkins came in first.

Andre reached the state finals in the 200 yard individual medley. He came in with a time of 2:08.21. Orange’s Phillips finished 7th in the same event, which also led to him qualifying for states.

Other individual female state qualifiers for Orange included Sandra McCouch, who finished 6th in the 100 yard breaststroke. McCouch will join Sikes in the 50 yard freestyle after she came in 8th.

Campbell finished 5th in the 100 yard butterfly. She came in 4th in the 200 yard freestyle.