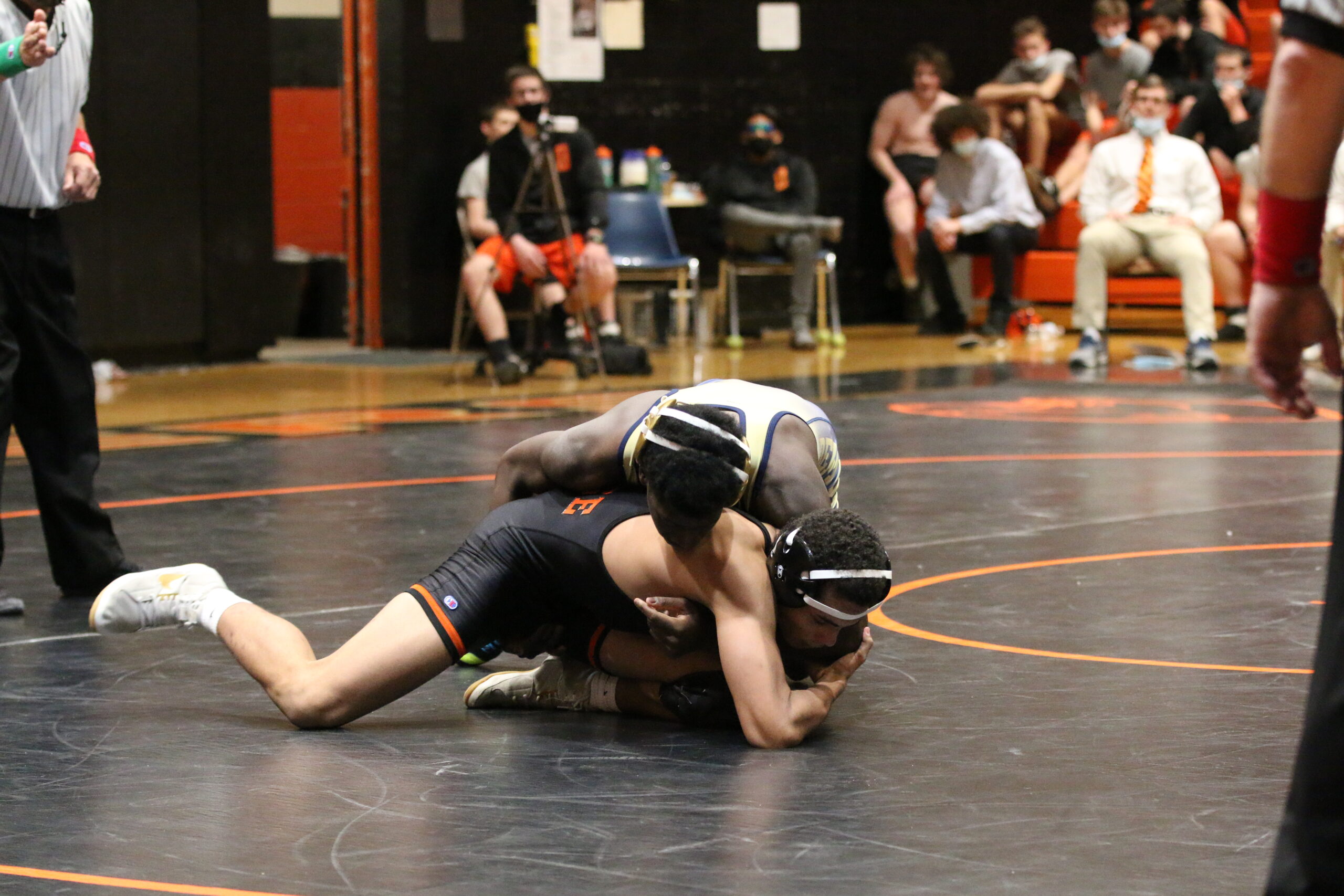 From the moment the Orange wrestling team resumed a normal, standard schedule in November to the time it ended its dual season against Union Pines last Wednesday in the 3A Eastern Regional Championship match, the proof of improvement of the squad lays in the numbers.

9: the number of new starters for Orange wrestling after a loss season in 2020-2021 because of the pandemic.

148: Combined wins for the season by Orange’s new starters this season.

Last Thursday, Orange fell to Union Pines 49-24 in the Eastern Regional Championship match in Cameron. It was the Vikings first-ever regional title. On Saturday, Fred T. Foard defeated Union Pines 58-12 to win the 3A State Championship at the Greensboro Coliseum Fieldhouse.

Orange was deprived of a 12th regional title. They last reached the state championship match in 2018, when they lost to Piedmont in Greensboro.

Earlier on Thursday night, the younger Orange wrestlers came through in a 39-33 victory over Croatan, who won ten regional championships in 16 years in the 2A ranks. In a match where every point counted, four Panther newcomers came through with wins over a Cougar team that reached the 2A State Championship match in 2020, the last time a dual team state tournament was contested (The event was canceled in 2021 because of the pandemic).

At 120 pounds, Orange’s Braden Crawford started the night by pinning Colton Leiske in 2:00 to give Orange an early 6-0 lead. Junior Dillon Heffernan, a three-year starter who leads the team with 29 wins this season, scored his own pin over Tommy Williams at 4:35. At 132 pounds, Jared Hutchins pinned Angelica Steffy in 1:58 to increase the Panthers’ lead to 18-0.

Orange senior Brendon Worsham, who qualified for the 3A State Championships last year, earned a 7-1 decision over Blake McCabe. Worsham improved to 27-5 on the season.

The heavier weight classes have been the most reliable part of Orange’s team this season and it was no different in its final dual victory of the season. After Worsham’s decision victory, Acoya Isley held off Croatan’s Landon Gray 13-7. Isley, who has won two individual tournaments this season, is 23-5 in his first year as a starter.

At 220 pounds, Elijah Acosta earned the most thrilling win of the night. Acosta went to sudden victory against the Cougars’ A.J. Pile Jr., but earned a trip takedown which led to back points in the first extra session, resulting in a 7-2 victory. Acosta, whose father Mike wrestling under Bobby Shriner in the 1990s at Orange, is 28-3.

Heavyweight Hugo Vazquez, who captured the Jim King/Orange Invitational in December, ensured the Panthers would advance to the Eastern Regional Championship match with a pin over Tomas Aguero in 2:54.

In the championship match against Union Pines, Heffernan opened with a forfeit victory at 120. Hutchins held off Johann Diaz 11-9 to push Orange’s lead to 9-0.

The Vikings’ Joseph Vrabcak earned a 9-0 major decision at 138, while Gaige Lloyd scored a pin to give UPHS the lead at 10-9. Samuel Crawford pinned Houston Leeah in 1:15, but that was the last time the Panthers would have the overall lead. The Cougars earned three consecutive individual wins, including two pins, to go ahead 24-15.

Acoya Isley pinned Dantrell Williams at 195. Colton Collins earned a pin over Acosta, who suffered only his fourth loss of the season. At heavyweight, Vazquez earned a 3-1 decision over Kellen DeVries, but it was the Panthers final win of the match. Vazquez will go into the 3A Mideast Regionals at Union Pines High on Friday with a 25-6 record.

Also at regionals on Friday, several Cedar Ridge wrestlers will go for spots in the 3A State Championship. The last Red Wolf to make the state championships was Daina Pritchard last summer at Eastern Guilford High School, where the regionals were also held.

Cedar Ridge junior Fernando Martinez is in the hunt for 100 career wins before the end of the season. Martinez will go into regionals with 89 career wins. He will compete in the 113-pound weight class. Other Red Wolf grapplers making their regional debuts will be Kaden Tatro and freshman Leo Oguntoyinbo.