Ahead by a Century; Orange women roll past NE Guilford 52-27 for Condron’s 100th career win 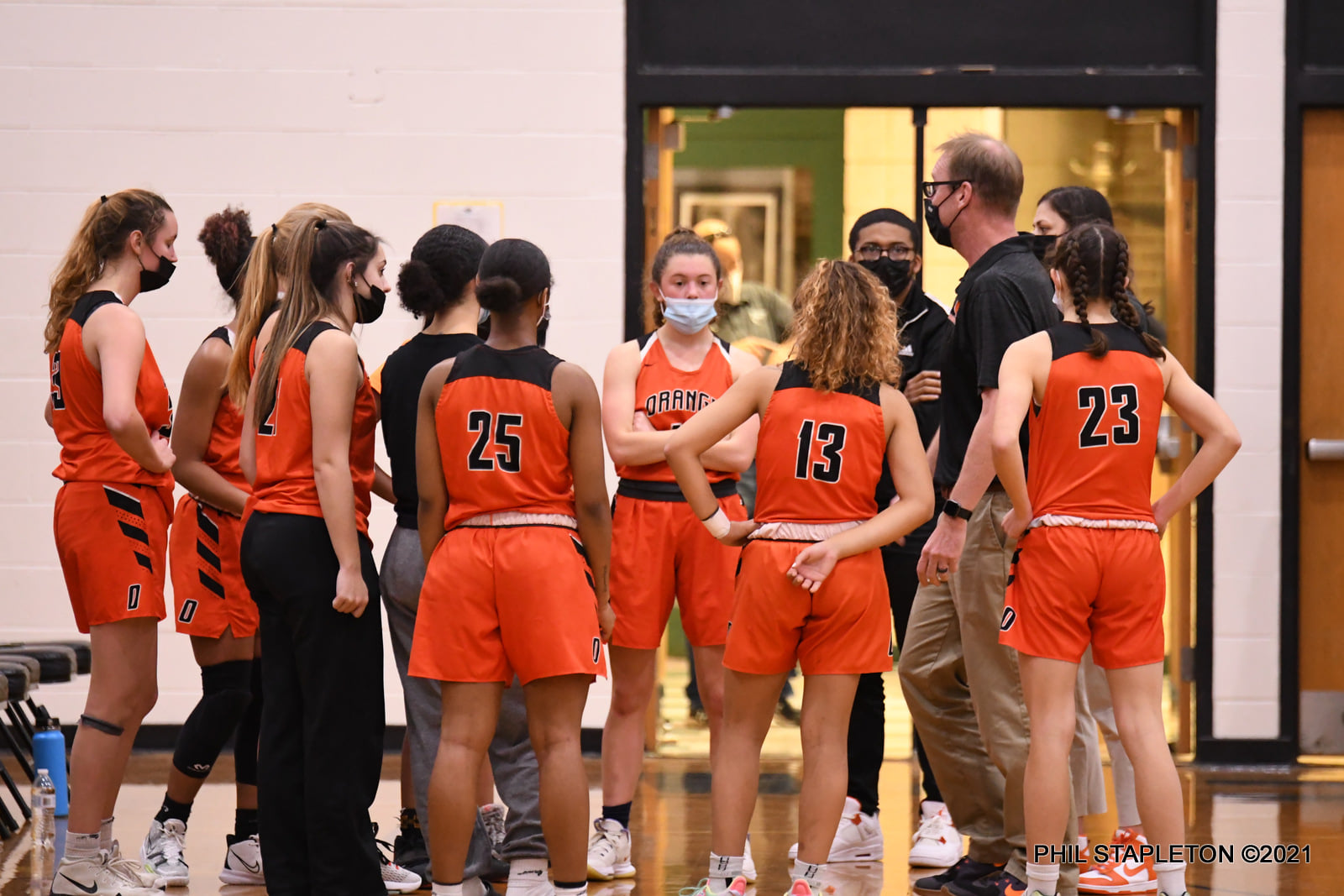 GIBSONVILLE–If they’re fortunate enough, a basketball coach only gets a chance to celebrate their 100th victory once.

After playing the nightcap of a six-game day on Tuesday at Eastern Guilford High School, B.J. Condron’s Orange women’s basketball team tipped off a 11 o’clock the following morning against Northeast Guilford. By the time the Lady Panthers disposed of the Rams 52-27, it was barely past noon. So Condron made it a total basketball day.

More to the point, he spent it doing what he’s commonly done at Orange, aside from organizing practices, preparing his P.E. courses, checking in on East Carolina football and basketball news while listening to various Primus, Metallica and Meshuggah songs.

He went to support the people nearest to him.

His wife, Carla, his son Jalen and daughter Ellie watched on from behind the Orange bench as the Lady Panther players yelled loudly after the public address announcer at Eastern Guilford acknowledged Condron’s 100th win. Ellie, who returned to playing basketball earlier this month after the pandemic forced her off the court for nearly two years, noted afterwards that she was only about seven years from playing for her father at Orange–provided he makes it that long.

After leaving Gibsonville, Condron made a 50-minute drive to South Granville High School in Creedmoor, where the Orange men’s basketball team fought hard but dropped a 69-64 game to Cary in the semifinals of the Navy Bracket of the South Granville Holiday Invitational. He was just getting started. Condron then journeyed into Durham County to McDougald-McLendon Gymnasium at North Carolina Central University. That’s where Southern Durham, led by longtime Orange coach and friend Greg Motley, faced Hopewell in the third place game of the Champions Durham Classic.

In a postgame interview, Condron eschewed the amount of wins he’s built over the years.

“Hopefully, I’ve built 100 positive relationships over the years,” Condron said. “I’ve been there awhile so I felt like this was coming. If you do it long enough, it’s not really about the wins or the losses. You learn over time that it’s about the relationships you build with people.”

If that’s what Condron has aimed to build, there’s been ample evidence recently that he’s been successful.

On December 2, during a road game against North Carolina School of Science and Math in Durham, former Orange players Lauren Cates, Kate Burgess and Jala Rainey (who graduated in June) were at courtside. Burgess and Cates were members of Condron’s most successful team, the 2016-17 squad that started the season with a 21-game winning streak, including victories over Chapel Hill, Northwood and Cardinal Gibbons. They won the Big 8 regular season and tournament championships.

The starting center for that team was Mia Davidson, who was also in attendance for the Northeast Guilford game on Wednesday. At first glance, Davidson appeared to be the ultimate undersized center, standing at 5-foot-7 and often giving up 5-to-6 inches to the opposition’s tallest player. Before she became the all-time home run hitter in Mississippi State softball history, Davidson would regularly knock defensive rebounds away from opposing players and create instant offense. Davidson, Kaylen Campbell, Beth Early, Adalyn Fleming, and Jazlyn Watson were all members of Condron’s first Orange team, which finished 2-24.

“When I think about that team, it was just awesome the way it came together,” Condron said. “From that four-year span where we won two games in my first year coaching. Then we progressed and they stuck with it. They bought in with what we were doing and it paid off for them in the end.”

To quote another Condron musical favorite, Tom Petty, they were learning to fly. Three years later, Davidson, Campbell, Early, Fleming, Cates, Watson and an Eastern Alamance transfer named Icez Barnett would comprise the nucleus of a team that won the Eastern Alamance Holiday Hoops Tournament, reached the Sweet 16 of the 3A State Tournament and finished 26-2. Cates would go on to score over 1,000 points in her career.

“It means a lot to me when they show up to games and come to say hello,” Condron said.

A senior on Condron’s first team, Alicia Harris, is still at every Orange game. After serving as an assistant in recent years, she now operates the scorebook for the men’s and women’s teams. Her younger sister, Aaliyah, currently is Orange’s leading scorer and just committed to play college basketball at Randolph-Macon in Ashland, VA.

Condron is just as much a student of Orange women’s basketball history as he is the coach. In the postgame on Wednesday, he asked about names from the 1990s likes Dave Murr and Charles Watters. Murr, who started as a head coach at Orange in 1991, coached Constance Poteat, who would go on to play for Kay Yow at N.C. State. Poteat led Orange to the 1993 PAC-6 Tournament Championship, roaring back from an 18-point deficit with 3:43 remaining to beat Northern Durham at Poe Gymtorium in the championship game. Condron was in middle school when Murr took over the program.

Now, the milestone is behind Condron and 2022 is ahead. Even with his team having won seven-of-its-last eight games, there are plenty of issues to fix. Orange will face crosstown rival Cedar Ridge on Tuesday before taking on Person. It will be the first conference game between the Lady Panthers and the Rockets in over 20 years.

As Condron went to bed on Wednesday night, he posted on Facebook “One word to describe today…blessed!”

There’s no doubt many who know Condron feel the same way about him.