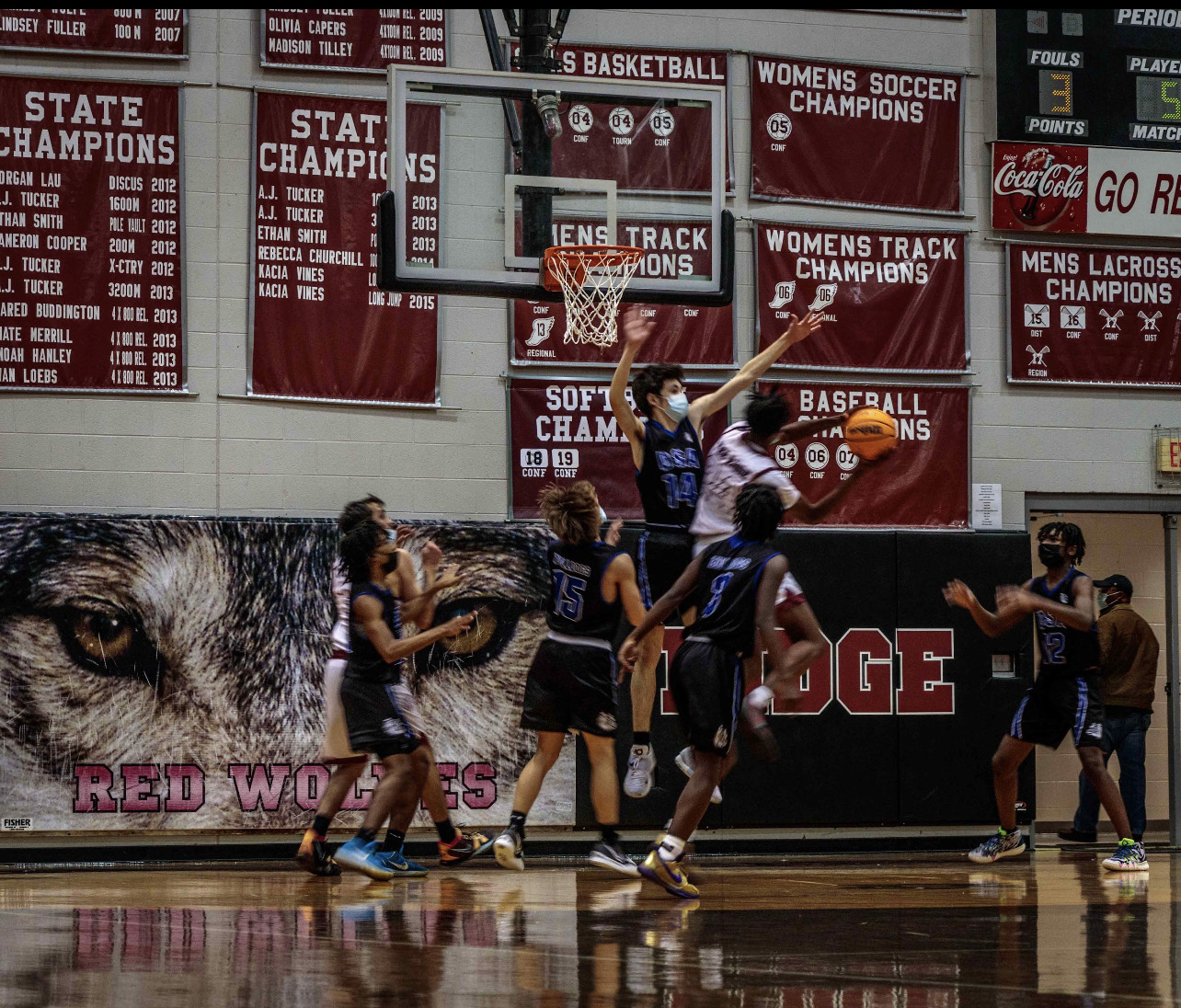 Losing seven regular rotation players from the year before has the tendency to create uncertainty at the beginning of a new basketball season.

Yet even after losing five of his top six scorers from last season, Cedar Ridge men’s basketball coach Jaison Brooks didn’t have to worry about putting points on the board when it mattered most against Durham School of the Arts on Monday night.

The Red Wolves broke open a tight game by scoring 28 points in the fourth quarter to break open a tight game and defeat the Bulldogs 61-40 at Red Wolves Arena on Monday night. In his first varsity game, junior guard Colton Taylor finished with a game-high 15 points, nine of which came in the final 8:01.

Junior Něco Clark added ten points as the Red Wolves won its season opener over the Bulldogs for the second time in three years.

Caleb Hawkins led DSA (1-4) with 12 points, most of which were 3-pointers in garbage time.

After Cedar Ridge pushed its lead to 27-18 midway through the third quarter, the Bulldogs rallied for consecutive field goals from guard Josh Dorsette and Bryce Lawson to reduce the Red Wolves lead. In the waning second of the third quarter, Taylor caught a 3-pointer that fell short of the rim and laid it in just before the buzzer, which triggered at 12-0 run and put the game away.

“That’s pretty much how he’s played since he’s been part of our program,” Brooks said. “We were excited to have him move up from the junior varsity squad. That’s what we expect from him. He works hard.”

After losing A.J. Richmond, Grady Ray, Luke Pagnanelli, Ian Johnson, Samuel Garbee and James Ragland to graduation, and rising junior Johntez Raspberry transferred to Walter Williams, it would have only been natural to wonder about Cedar Ridge’s depth. Instead, all eleven Red Wolves that dressed out played, and ten of them scored.

“We are happy with the group that we have,” Brooks said. “They all have their strengths that contribute to what we’re trying to do. So we are ecstatic that they’re potential is starting to show. It’s also the things that we see behind closed doors be brought to light so others can see it.”

Cedar Ridge’s Rawlins Taylor scored four points early for the Red Wolves as the game was nip-and-tuck early. The Red Wolves led 10-8 at the end of the first quarter. Colton Taylor added two field goals in the second quarter as the Red Wolves took a 20-15 into the locker room.

The game kicked off a busy week for the Red Wolves. They will return to action tonight (Tuesday) against Voyager Academy at 7:15 at Cedar Ridge. On Friday night, the Red Wolves will host East Chapel Hill.

The best way to examine the growth of the Cedar Ridge women’s basketball team in its season opener compared to last winter was by looking at the bench.

Last year, the Red Wolves often only had five players available. They played several games without simply being able to substitute.

On Monday night, the Red Wolves had 15 players suited up under new head coach Megan Skouby. And that was without several starters from last year.

Nonetheless, DSA easily prevailed 60-19 after the Bulldogs jumped out to a 14-0 lead early. Cedar Ridge’s Julie Altieri, coming off a 3A State Championship in volleyball, was the Red Wolves leading scorer in her first high school game with six points. Kathryn Romska, in her varsity debut, scored four points.

Skouby, who served as an assistant volleyball coach for Cedar Ridge this season, is a former head coach at South Iredell. The Red Wolves will host Voyager Academy tonight at 6 at Red Wolves Arena.

Nylah Daniels led the Bulldogs (3-1) with 16 points, while Christina Burton and Precious Ogboko each had 14.