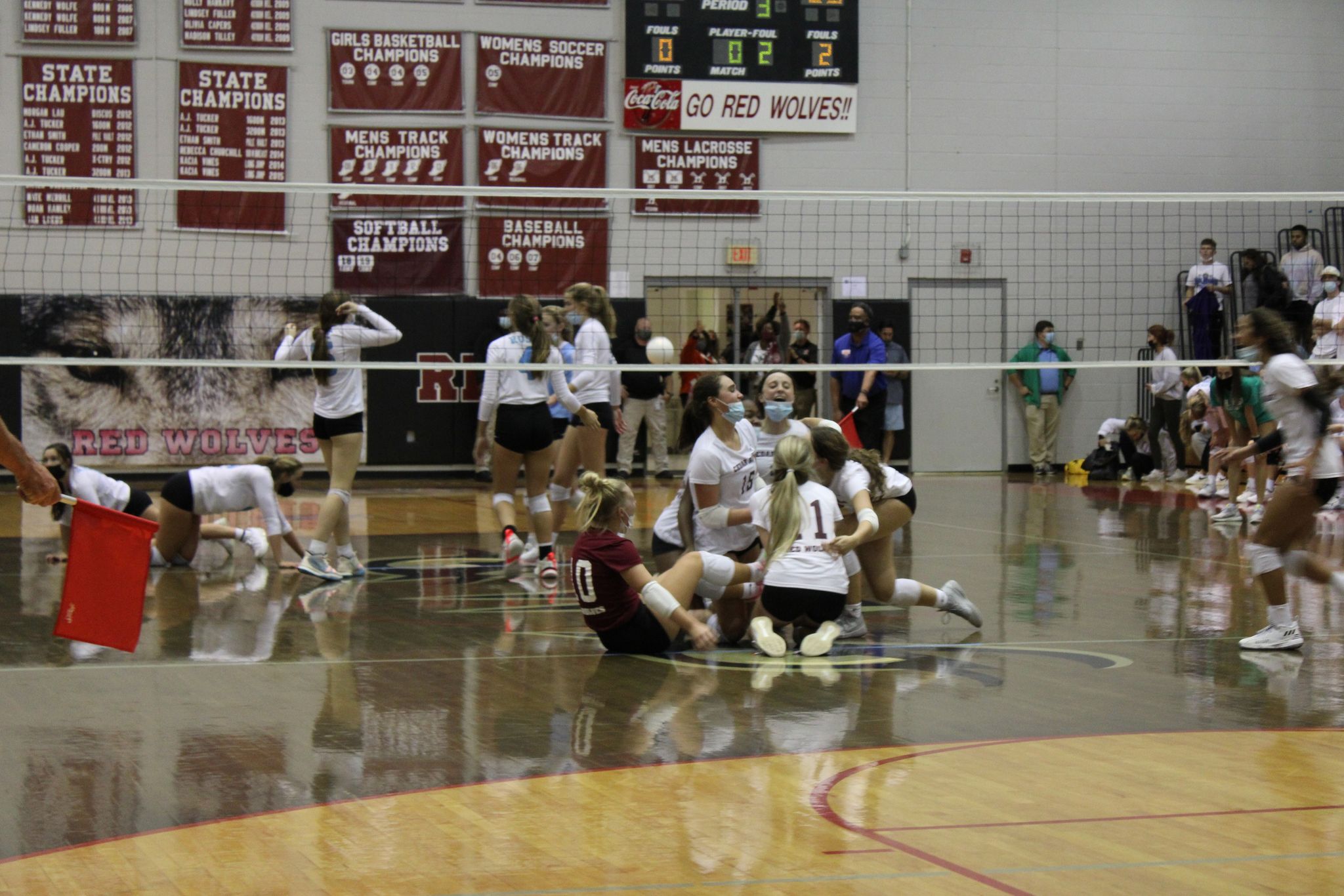 J.H. Rose rode into Hillsborough on Tuesday night with plenty of fans in tow.

The Rampants carry one of the richest athletic heritages of any high school in North Carolina. In June, Rose captured the 3A State Championship in baseball.

The volleyball team was in its fourth regional championship game in eight years when they faced off against Cedar Ridge on Tuesday in Red Wolves Gymnasium.

When the Rampants’ jumped out to a 6-1 lead and coach Ginny Howard substituting players at will in the opening set, it felt like the Red Wolves were somewhat shaken. But they never panicked and they didn’t wilt under the pressure, even though it was their first regional championship game together.

Rose led the vast majority of the opening set. A net error by the Rampants gave the Red Wolves its first lead of the match at 20-19, but juniors Grace Young and Julie Altieri would serve Cedar Ridge to victory in the opening set, closing with a 5-1 run culminating with an Altieri ace.

Any opponent that faces Cedar Ridge must understand they’re not just facing a volleyball team with three juniors (Cameron Lloyd, Altieri and Grace Young) who have played on the varsity level since they were freshmen. In reality, they’ve played together for nearly a decade. While Cameron Lanier (who also started as a freshman) played softball with the Orange County Parks and Recreation Department, Lloyd, Altieri, Young and Anaya Carter all played against and with each other in the White Cross Recreation Center when they were in elementary school.

Friday night lights? This was more like Friday Night Liberos, with hot dogs and soft drinks handed out to players after games while their parents waited to take them home. It’s still a tradition in White Cross. That experience turned into travel ball with the Chapel Hill Area Volleyball Club, where they roamed throughout the country. The players’ devotion to CHAVC remains so strong that, after Cedar Ridge’s playoff win over Northwood last Saturday, Lloyd, Benkowitz, and Lanier went directly to CHAVC’s season opener.

That level of familiarity is rare among high school teams. The players know each other’s quirks, their habits, and perhaps more importantly, how to make each other laugh.

Perhaps that’s why Cedar Ridge went through the entire East Region of the state playoffs without losing one set in its five matches. The Red Wolves swept South Brunswick, South Johnston, Harnett Central, Northwood and, finally, J.H. Rose. The latter put Cedar Ridge in a league of its own, the first volleyball team in school history to win 30 games.

“I would say that we were rattled early,” said Cedar Ridge head coach Fiona Cunningham. “But I’d say they showed the composure that we’ve been working on. Our key word has been consistency the last few games. Other teams are going to get their big points and we just have to stay calm.”

Now, Cedar Ridge will face North Iredell at Reynolds Coliseum on Saturday afternoon. They’re two teams that are complete strangers to one another, but have plenty in common. Cedar Ridge played in the dominant 3A conference in the East, the Central Carolina, which put three teams in the state quarterfinals. The Raiders (26-1) shared the Western Foothills Conference championship with Fred T. Foard, who handed the Raiders its only loss.

Both teams will likely have almost all of its key parts back next year. None of the players that Cunningham uses in her 9-woman rotation are seniors. The Raiders have just one senior on its roster–and five freshman.

North Iredell won the 2017 3A State Championship in Raleigh. They defeated Chapel Hill, Cunningham’s alma mater. While many of the Cedar Ridge players have already played throughout the country in their young lives, the bright lights of Reynolds Coliseum will present an environment they’ve never experienced before.

“We’re so excited for it,” Cunningham said. “This has been the goal in mind since the start of the season. They’re ready to feel that environment and know they’ve earned it.”