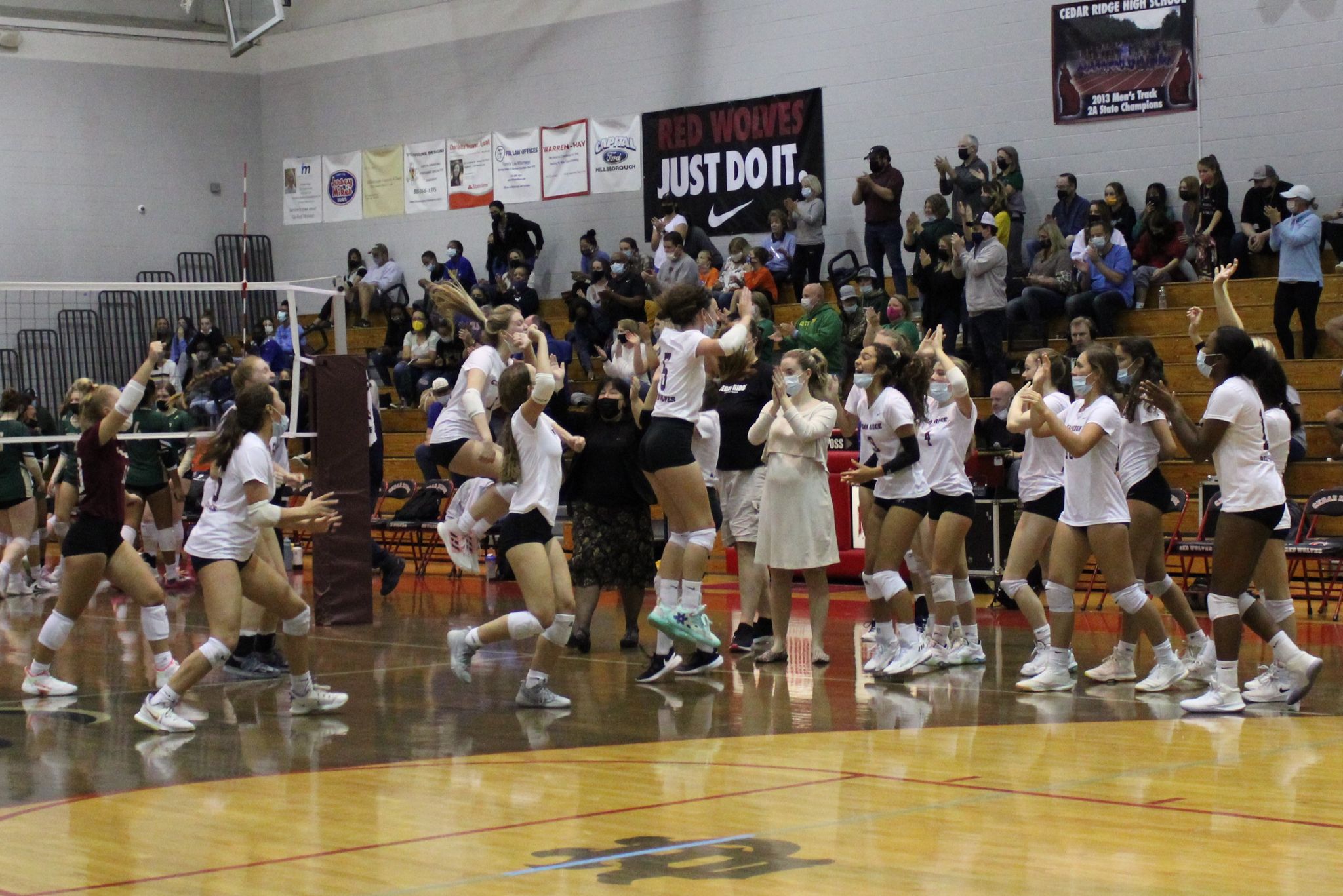 In January, Cedar Ridge had to go into Greenville in hopes for playing in Raleigh for the 3A state volleyball championship.

Now, a team from Greenville will have to go through Cedar Ridge to get to Raleigh.

On Saturday afternoon, junior Cameron Lloyd tallied eleven kills and 15 digs, while Cameron Lanier added nine kills and four digs as the Red Wolves swept Northwood 3-0 in the 3A state quarterfinals at Red Wolves Gymnasium. Cedar Ridge, the champions of the Central Carolina Conference, will host J.H. Rose for the 3A Eastern Regional Championship on Tuesday night in Hillsborough.

Rose, which has constantly been ranked #2 in the 3A East RPI standings throughout the season, defeated Person 3-1 on Saturday in Greenville.

The winner of Rose-Cedar Ridge will play for the 3A State Championship at Reynolds Coliseum in Raleigh against the winner of the Western Regional Championship game between North Iredell and Fred T. Board next Saturday at 1:30PM.

In a matchup between two Central Carolina Conference rivals, it was the third time the Red Wolves (29-2) defeated the Chargers (24-6) this season, and the game fit a similar pattern from the previous two meetings. For the second straight match, the Chargers extended the Red Wolves into overtime in the opening set, which Cedar Ridge won 28-26.

Once again, the Red Wolves depth wore down a Chargers team that suited up just eight players.

“We went into the game thinking consistency,” said Cedar Ridge coach Fiona Cunningham. “They’re a good team and we know they can take a set from us. We just had to stay unfazed. Let them get their good swings. Let them put the ball away and let them come right back. Don’t let it turn into a run. Don’t let it turn into a bunch of errors. We did a really good job of that.”

While Northwood only led once the entire match, at 3-2 in the opening set after a kill by Hannah Forbes, the opening two sets were tight. In the first frame, Cedar Ridge ran off five straight points to build a 17-10 lead behind an ace from Cameron Lanier and a kill from Melissa Benkowitz. Northwood drew within 23-22 after a 7-2 run, which included three kills from sophomore Asia Thigpen, the daughter of UNC co-defensive coordinator Tommy Thigpen.

Cedar Ridge had four set points to take the first set. Northwood senior Annika Kearsley sent the set into overtime off a kill assisted by Ainsley Fauth. After a finish by Lanier, the Red Wolves had another chance to finish the set, but a return by the Red Wolves went wide. Cedar Ridge finally took the set when Melissa Benkowitz’ attack was blocked by a Charger, but it touched the antenna on the net. On set point, Cedar Ridge’s Julie Altieri took a dig from Lloyd and dunked it over the net, setting off a huge reaction from a rowdy Red Wolves student section.

“Julie is great in regards to ball distribution,” Cunningham said. “She knows when to go for the dump or not. That’s part of being a setter is knowing how to run the court. It’s one thing we’ve worked really hard on this year.”

Lloyd, Lanier and Melissa Benkowitz all recorded kills to open the second set, where Cedar Ridge jumped out to a 6-3 lead. An ace by Grace Young put the Red Wolves ahead 10-5 and forced a Northwood timeout. Again, the Chargers got close late behind kills from Thigpen and Natalie Bell. The Chargers served with a chance to tie trailing 20-19, but the ball went into the net. it was a mistake Northwood never stopped paying for.

The Red Wolves reeled off four of the final six points, including an ace from Altieri, followed by a spike from Lloyd to make it 23-20. Lloyd provided a soft tap over the net for the Red Wolves 24th point, and a kill by Lanier was blocked wide by a Charger for set point.

“I think there are plenty of teams that have super strong athletes in our conference,” Cunningham said. “But we have six players on the court at all times who can contribute. That’s really hard for teams to put together in high school ball.”

The third and final set opened with a thrilling second point, which featured a five-dig sequence by Cedar Ridge. A spike by Tigpen was saved by Altieri with an outstretched fist, which led to a Lanier kill. With the Red Wolves leading 14-5, an attack by Forbes bounced off Altieri’s fist high into the air and bounced three times off the overhanging basketball backboard. Benkowitz remained composed and calmly played the ball once it finally came down. It led to Altieri setting up Lloyd for the kill.

This will be the first time since 2015 that Cedar Ridge has hosted the 3A Eastern Regional Championship match. Six years ago, the Red Wolves were coached by Charlie Oakley and lost to Asheboro 3-1 with a trip to the state championship game on the line.