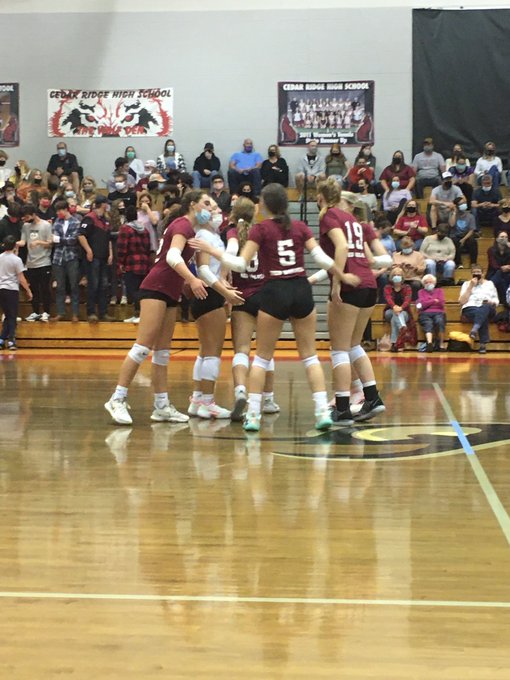 The further Cedar Ridge volleyball goes into the postseason, the tougher the tests will be.

At least, that was logic dictates. While Harnett Central did come the closest than any other team thus far in the 3A State Playoffs to actually winning a set against the Red Wolves, Cedar Ridge still advanced comfortably to the state quarterfinals on Thursday night.

In front of a crowded Cedar Ridge student section and Harnett Central fans shaking cowbells, the Red Wolves (28-2) defeated the Trojans 3-0 on scores of 25-18, 25-8 and 25-8. The Red Wolves will face Central Carolina Conference rival Northwood on Saturday in the Elite Eight.

Harnett Central, the champions of the 4A/3A All American Conference, conclude the season 19-8. The Trojans had won eight in a row, and 12 of its last 13, going into Thursday night.

“I am so proud of my team for handling themselves well tonight,” said Cedar Ridge head coach Fiona Cunningham. “They adjusted well to the loud crowd on both sides. In the first set, we tried to do too much. In the second and third sets, we came back to our game, which is ball controlled oriented.”

Junior outside hitter Cameron Lloyd finished with 15 kills, six digs, five aces, and three assists as the Red Wolves clinched its first trip to the regional semifinals since 2015. The opposite outside hitter, Melissa Benkowitz, finished with seven kills and nine digs. Libero Grace Young, who has committed to UNC Asheville, led Cedar Ridge with 21 digs. Setter Julie Altieri had 29 assists.

There were five ties and two lead changes in the opening set, easily the tightest of the night. After a Cedar Ridge return went long, Harnett Central even the frame 12-12. The Red Wolves went on an 8-2 run, which included Anaya Carter sending an offspeed attack softly over the net off a feed from Altieri. After a side out for the Trojans, Altieri played the ball off the net and passed it to Lanier, who attacked from a standing position and found an open spot in the Trojans’ end.

Benkowitz and Altieri had kills to push the Cedar Ridge lead to 20-14. The Red Wolves wrapped up the set 25-18 after a Trojan overhand attack went long.

That was the end of the drama for the night. Cedar Ridge jumped out to a 6-1 lead in the second set behind two kills from Carter, an ace from Graylinn Surge and two aces from Lloyd. With Cedar Ridge leading 15-5 after an ace from Benkowitz, sophomore Addie Reid sent the gym into delirium with three consecutive kills, the last one unassisted, which forced another Trojan timeout.

“Addie has grown so much this season,” Cunningham said. “She knows how to get the team hype, the team loves seeing each other be successful and she is so good at bringing her team up.”

In the third set, Cedar Ridge opened with a 13-2 run. During that spurt, Lloyd had three kills and an ace. Sophomore Natasha Buchler-Fosado, who spent this season on the junior varsity squad, played extensively down the stretch. Carter, Benkowitz and Lanier had kills leading up to match point.

Cedar Ridge has now won ten in a row since dropping a 2-0 decision to Green Hope during a quad-match at Chapel Hill High School.

It won’t be any surprise to anyone who has followed the RPI rankings that of the final four teams remaining in the 3A Eastern Region, three are from the Central Carolina Conference. Cedar Ridge will face Northwood on Saturday at Red Wolves Gymnasium in the state quarterfinals. The Chargers, who were swept by the Red Wolves in the regular season, defeated 4th-seeded Croatan on Tuesday in Newport.

Person, who defeated Northwood last week in the Central Carolina Conference tournament semifinals, defeated Hunt in Wilson to advance to the state quarterfinals. The Rockets will travel to Greenville to face J.H. Rose on Saturday.

“I am not surprised but he strength of the Central Carolina,” Cunningham said. “We are so proud of our conference for bringing it and we cannot wait to see Northwood on Saturday because we know they will bring it.”