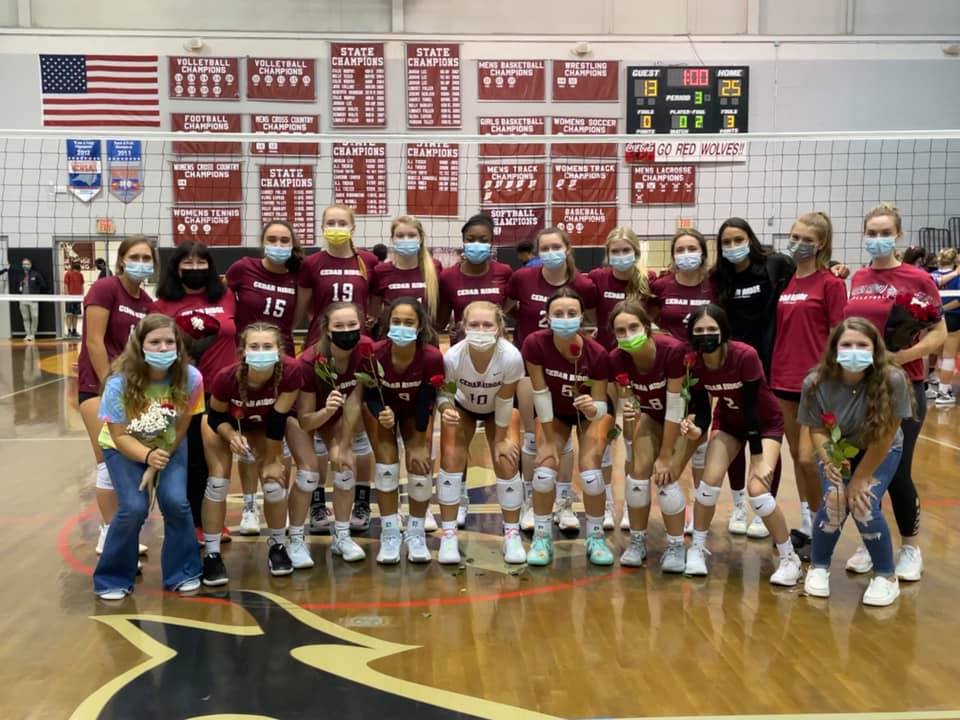 In soccer, it’s referred to as the double.

it happens when a team wins its regular season championship, then follows by winning the league’s domestic club cup tournament.

Not only has Cedar Ridge accomplished the volleyball equivalent of the double, but they will now go down as the winningest team in school history.

A double for any program is quite an achievement. Since August, the term “win states” has been tossed around the Cedar Ridge program as commonly as most pronouns.

The goal now is the treble. Then again, it always has been.

On Wednesday night, Cedar Ridge won the Central Carolina Conference Tournament championship with a 3-0 sweep of Person at Red Wolves Gymnasium. It was the third time this year the Red Wolves (25-2) swept the Rockets, who upset Northwood on Tuesday in the semifinals at Charger Gymnasium.

Once again, the White Cross mafia led the way for Cedar Ridge. Junior Cameron Lloyd finished with 15 kills and 12 digs. Junior setter Julie Altieri, who grew up playing with and against Lloyd, Grace Young and Cameron Lanier in the White Cross Recreation League and elsewhere, finished with 31 assists, 12 digs and four aces. Young, another junior who has committed to play at UNC Asheville, led the Red Wolves with 21 digs.

Cedar Ridge surpassed the 2015 team for the most wins in one season. The 2015 Red Wolves finished 24-4, won the Big 8 Championship (there was no conference tournament) and reached the Eastern Regional championship game, where they fell to Asheboro.

Regardless of how the 3A State Playoffs turn out, the Red Wolves will be remembered as a team that dominated a deep league. Cedar Ridge finished 14-0 against Central Carolina Conference teams and dropped only three sets out of 42.

On September 23, Cedar Ridge swept Person in Roxboro, known as one of the loudest gyms in the area. On that day, the closest the Rockets came to winning a set came in the 2nd when they amassed 22 points. Some observers thought the return of Person outside hitters Karter Hawkins and Delaney Glover would lead to a tighter match in the tournament championship, but the Rockets only led once, and that was when Hawkins scored a kill in the opening set to give Person a 2-1 lead. There were only two ties, both in the opening set, as well.

The Red Wolves went on a 7-2 run, which included two aces by Lloyd and another by Lanier, to take a 9-3 lead in the first set. Lloyd had six kills in the frame. This was the only set where Person made a serious run late after Hawkins and Glover had consecutive kills to reduce its deficit to 17-15. Then Altieri set up finishes by Lanier and Melissa Benkowitz to trigger four consecutive Red Wolves points. Lanier wrapped up the set with a block at the net to turn away a Person attack.

Cedar Ridge’s depth overwhelmed the Rockets in the second set. Six different Red Wolves recorded kills, including another six by Lloyd and two each from Lanier and sophomore Addie Reid. Leading 6-5, Cedar Ridge went on a 9-0 run to take control of the set. Reed had two kills during that span, while Julie Altieri had a flash kill off an assist from Young. Person reeled off five straight points to cut the Wolves’ lead to 15-10, but Reed came up with a block of a Glover kill that landed just inside the Person end line to silence the threat. Lloyd had an unassisted kill for the 25th point.

The third set was all Red Wolves. Cedar Ridge roared out to a 7-0 lead after Altieri had consecutive aces and kills from Lanier, Lloyd and Anaya Carter. The longest rally of the match occurred with Cedar Ridge leading 20-10. It ended when a ball bounced off Altieri’s fist, directly to Young’s hand and sent across by Benkowitz. Lloyd wound up with the kill. Lanier finished off match point for the Red Wolves third championship in two years.