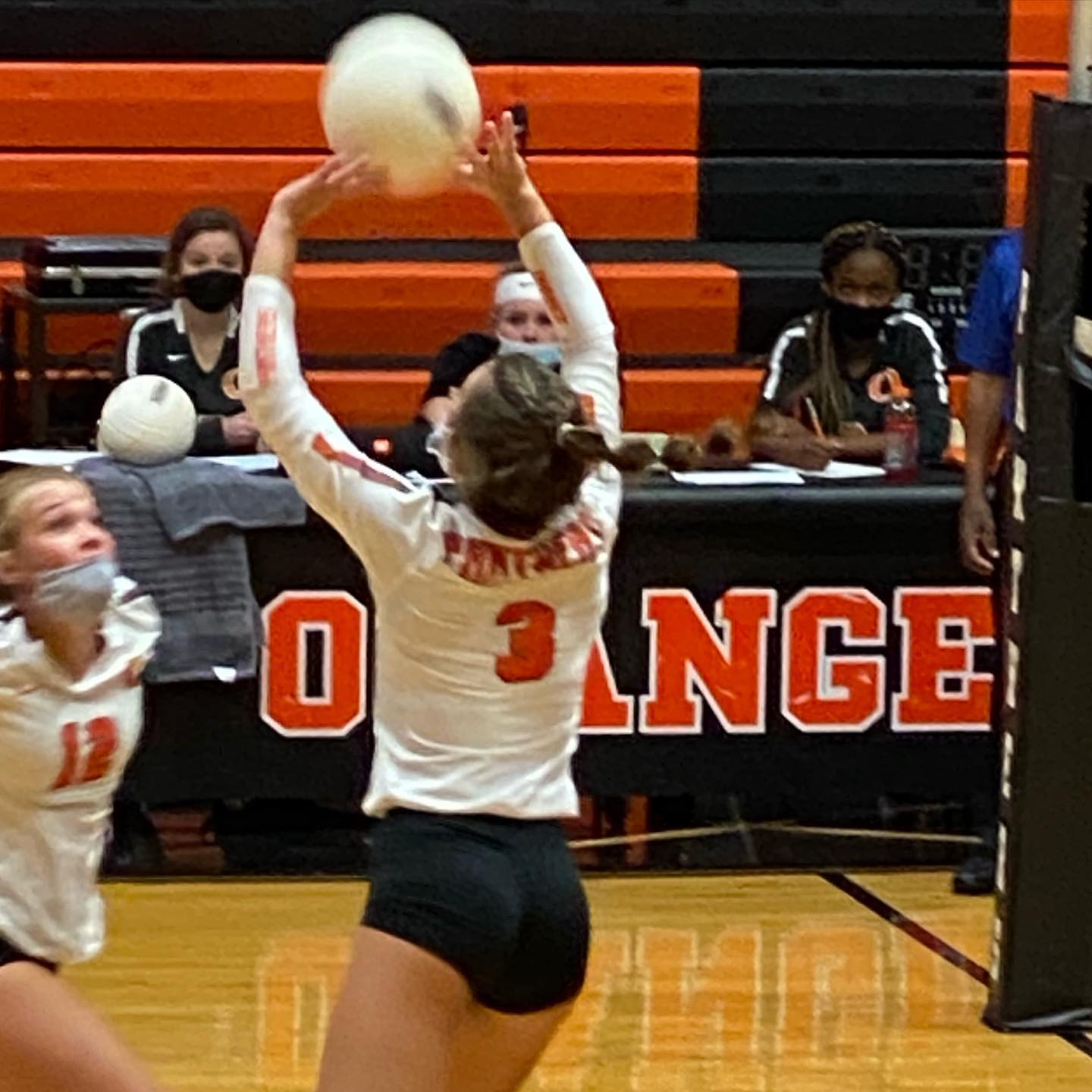 If you ever find yourself watching an Orange volleyball match, which is harder than it should be right now, chances are you’ll get your money’s worth.

Certainly that was the case on Wednesday night when Orange and Southern Alamance went to a five-set battle where the Patriots earned a 3-2 win to square the regular season series. But it was the Lady Panthers’ match for the taking.

Orange led 11-8 in the fifth and decisive set after Caitlin Carden knocked down a kill attempt by Southern’s Kelci Brooks. After a timeout, the Patriots reeled off five straight points and seven of the last eight to win 15-12. Rylee Humble scored a kill to set up set point, which was notched by Brooks. The Patriots (12-4) have won seven of its last eight matches.

Orange (5-4), who defeated the Patriots in four sets on September 1 in Graham, had its chances. In the opening set, the Lady Panthers had two sets points after a kill by junior Allie Wilkerson. But Caitlyn Russell spiked home a kill to tie the match at 25-25. Brooks scored the final point of the frame as the Patriots won 27-25.

Orange didn’t trail in the second set, which started with an ace from Carden. Wimsatt had six kills in the set, while Carden had 18 assists. Wilkerson ended the set with an unassisted kill as Orange won 25-22.

Southern Alamance jumped out to a 7-1 lead in the third set. The closest Orange could ever get was 18-16. Freshman Ava Duggins got a kill to make it 24-20 and it ended after a Panther return on set point went long.

The Lady Panthers fell behind 9-2 in the fourth set, but roared back to win it 25-22. Wimsatt had three kills during a 10-2 Orange run, which evened the set 10-10. Orange took a 19-16 lead off consecutive aces by Carden. Wimsatt forced a fifth set after a spike set up by Carden.

On Tuesday night, Orange swept Eastern Alamance to start a three game homestand. The game marked the return of junior Erin Jordan-Cornell, who was an All-Big 8 Conference player last season in volleyball and basketball.

After its 21-game regular season winning streak came to an end against the defending 3A State Champions on Monday night, the Cedar Ridge volleyball team went back to the business of starting a new one.

It was a prompt response from the Red Wolves after they were swept by Conley on Monday. Just as the Red Wolves swept the Vikings last month in Greenville, Conley drove up to Hillsborough and handled Cedar Ridge on scores of 25-15, 25-20 and 25-18. It was the first time that Cedar Ridge lost a regular season match under the direction of second-year head coach Fiona Cunningham.

Conley defeated Cedar Ridge 3-1 in the 3A State Playoffs in January, the Red Wolves only loss in 2020.

“Last year, they got runs and we couldn’t use our middle,” Cunningham said. “When we played them earlier this season, we got runs and kept them from using their middle. Tonight, it flipped back. It seemed like neither team has an answer in the game itself, but adjusts for the next time. They just played great.”

Both the loss to Conley and the win over East Chapel Hill came in a sparsely populated Red Wolves Gymnasium, where the attendance was held down courtesy of mandates by the Orange County School Board to limit the spread of COVID-19. On Thursday night, the Red Wolves will likely face a rambunctious, rowdy atmosphere in Roxboro when they face Person, who was swept by Cedar Ridge two weeks ago in Hillsborough.

“We’ve known all season we’re beatable,’ Cunnigham said. “I think the girls didn’t want other teams to know that, but we’ve known that all season. We just another team to match us and Conley did that.”