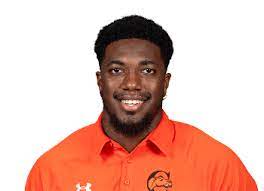 Keshawn Thompson: It was a showdown between a former Orange Panther and a former Cedar Ridge Red Wolf at Barker-Lane Stadium in Buies Creek on Saturday. The Campbell Fighting Camels, featuring former Orange linebacker Keshawn Thompson, faced off against the Elon Phoenix, which included former Cedar Ridge linebacker Adam Chnupa. The Phoenix defeated the Camels 24-23. For the second week in a row, Thompson led Campbell in tackles with nine. Last week, Thompson was honorable mention for Big South weekly football honors. Campbell is 0-2. They will face Presbyterian on Saturday in Buies Creek.

Adam Chnupa: Elon is now 1-1 after the victory over Campbell. Chnupa played special teams for the Phoenix in the win. Elon will travel to Appalachian State on Saturday.

Payton Wilson: In N.C. State’s loss to Mississippi State on Saturday night at Davis Wade Stadium in Starkville, MS, Wilson suffered a shoulder injury. Wilson did register his first sack of the season. He finished with three tackles. There’s no word yet on whether Wilson will miss any action. Mississippi State defeated N.C. State 24-10. The Wolfpack were deprived of its first road win against an SEC team since 1977.

Trenton Gill: Former Cedar Ridge punter Trenton Gill was too busy for the Wolfpack’s liking against Mississippi State. Gill had seven punts on Saturday night. He averaged 43.6 yards per punt. His longest was 55 yards. One of the punts was downed inside the 20-yard line. The Wolfpack will host Furman on Saturday night at Carter-Finley Stadium in Raleigh.

Rodney Brooks: After missing the opening game of the season for the Division II Livingstone Blue Bears, former Orange quarterback/defensive back Rodney Brooks made his season debut on Saturday. Savannah State, an FCS team, crushed Livingstone 50-6 at Theodore Wright Stadium in Savannah, GA. Brooks, a safety, had four tackles.

Bryse Wilson: On Sunday at PNC Park, the Washington Nationals defeated the Pittsburgh Pirates 6-2. Wilson suffered the loss for the Bucs. In four-and-one-third innings, Wilson surrendered five runs off seven hits and two walks. Luis Garcia, Alex Avila and Lane Thomas honored off of Wilson, who is now 2-7 this season with a 4.97 ERA. The Pirates travel to Miami next weekend.

Kayla Hodges: After a tight loss to N.C. State, the Elon women’s soccer team rebounded with consecutive wins last week. On Thursday, the Phoenix defeated Gardner-Webb 2-0 at Rudd Field in Elon. Hodges started and played all 90 minutes. On Sunday, the Phoenix defeated American University at Reeves Field in Washington, D.C. Once again, Hodges played the duration of the game and fired one of Elon’s ten shots against the Eagles. Through seven games, Hodges is tied for the team lead with two goals. Elon faces Furman on Friday in its final nonconference game of the year.

Brittany Daley: Emory University’s women’s soccer routed Greensboro College 6-0 in Atlanta on Saturday. Daley played all 90 minutes at centerback for Greensboro. The Pride will travel to Bridgewater on Wednesday.

Jordan Rogers: The Division III William Peace women’s soccer team has won two in a row. On Sunday, the Pacers defeated Ferrum 3-1 at WakeMed Soccer Park in Cary. Rogers started at wingback for Peace. On Wednesday, Peace defeated Johnson & Wales University 2-0 in Charlotte. It was Rogers’ 40th game for Peace. The Pacers are 2-2. They will travel to Brevard on Wednesday.

Bailey Lucas: The Division III Meredith College volleyball team won two out of three matches over the weekend. On Friday, Christopher Newport defeated the Avenging Angels 3-1 on scores of 25-18, 24-26, 25-23 and 25-12 at Weatherspoon Gymnasium in Raleigh. For the first time this season, Lucas didn’t start for Meredith. She did finish with two kills, 14 assists and five digs. The Avenging Angels won both of its matches on Saturday. They opened with a sweep of Guilford on scores of 25-17, 25-8 and 25-22 at the Hermann Athletic Center in Raleigh. Lucas came off the bench and had 16 assists and one dig. Meredith defeated William Peace 3-1. Lucas led the Avenging Angels with 25 assists and seven digs. Meredith is 5-3 and will play a doubleheader against Brevard and Maryville on Friday in Brevard.