After UNC career, Chandler continues her ascension in Scotland 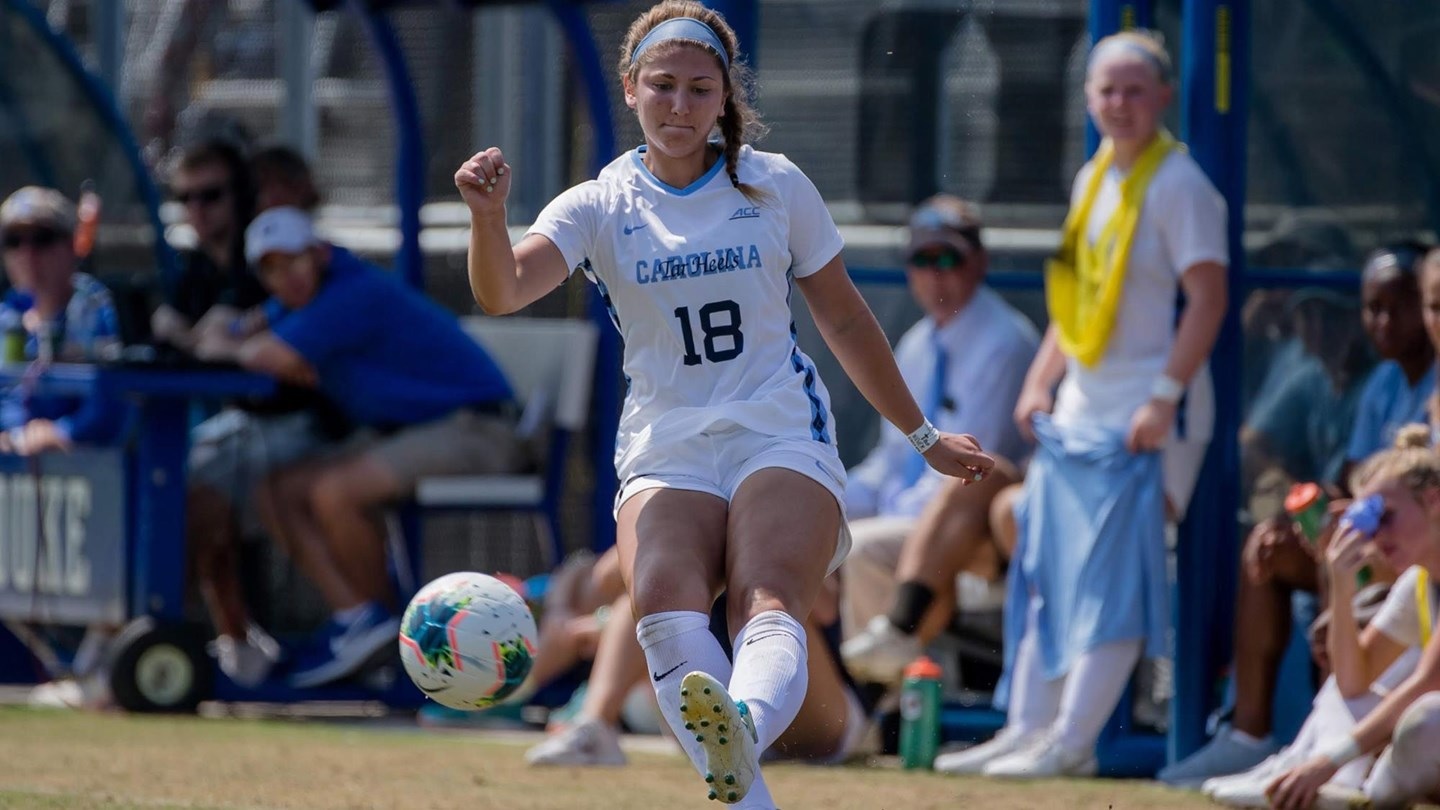 It may surprise some that the success of the UNC women’s soccer program is comprised almost as much by Calvin & Hobbes as it was by Mia Hamm and Crystal Dunn.

During her four years with the Tar Heels, 2017 Orange High graduate Natalie Chandler joined her teammates in memorizing quotes and reading books assigned by head coach Anson Dorrance. Her favorite came from a Calvin & Hobbes strip.

“Live your life in a never-ending ascension.”

From the time she moved with her family to Hillsborough from Bedford, New Hampshire, Chandler has had a relentless drive to explore and achieve. Last spring, she ended her UNC soccer career with a third straight trip to the Final Four. She had a 4.0 grade point average every semester. At Orange, Chandler led the most successful teams in the 33-year history of the program.

The Big 8 Conference Player of the Year in 2017, Chandler spearheaded Orange to consecutive appearances in the second round of the 3A State Playoffs in her junior and senior seasons. She was named All-State and All-Region. As a sophomore, Chandler was part of the only team in Orange history to sweep a regular season series from Chapel Hill in 2015.

She was even a state champion gymnast.

Chandler graduated from Orange as the valedictorian, then stepped off the stage at the Smith Center and walked onto the UNC women’s soccer team. It was a natural transition. Her sister, Madison, graduated from UNC in 2017 and recently completed her Ph.D at Michigan State. Chandler’s father, Brian, played baseball at UNC and embarked on a brief minor league career that took him to the San Jose Bees of the old California League.

So how did she accomplish all of that in such a short amount of time without approaching sleep as the enemy?

It started with a good foundation. Her mother, Sandra, and her father didn’t pressure her to learn. Instead, they created an environment conducive for learning.

“Madison enjoyed reading and we would go to museums together,” Natalie said. “I have a perfectionist gene in me. The pressure I put on myself wasn’t coming from outside forces. It was me wanting to do the best I could do.”

Her father, a business developer, moved his family from New England to Hillsborough because he loved the area from his college years.

Through the mists of time, Chandler will forever be linked to a group of athletes that will be remembered as Orange’s golden age. In her class was Mia Davidson, the all-time leading home run hitter in North Carolina softball history who led Orange to the 2017 3A State Softball Championship. Davidson has set school records at Mississippi State.

Chandler carved out her own legacy. She started her sophomore season by beating Chapel Hill in penalty kicks. The following month, the Lady Panthers edged Chapel Hill 3-2 on the road. Chandler assisted on the game-winning goal, scored by Rachel Shinnick.

“I played travel in Chapel Hill, so I knew most of their players,” Chandler said. “That definitely felt good. I was very proud of that team because Orange hasn’t had a great history in women’s soccer. That team got along so well.”

The 2015 Orange team was the most successful squad in school history with a record of 15-4-2. Chandler scored a goal in Orange 4-0 win over Cleveland in the opening round of the 3A State Playoffs in Hillsborough.

Somehow in the midst of soccer and finishing at the top of her class, Chandler also found time to became a state champion gymnast. Training at Bull City Gymnastics, she excelled in the floor exercise.

“I had a lot of energy as a kid,” Chandler said. “My mother put me in gymnastics when I was a child. I always had fun doing it. It’s a challenging sport but I always had a blast. I love soccer, but gymnastics may be my favorite sport to watch.”

Her favorite part of gymnastics was the vault. Part of the reason why?

Which largely sums up Chandler’s approach of ascending and never standing still.

On a fifth grade field trip to Washington, D.C., Chandler saw Dorothy’s ruby red slippers from “The Wizard of Oz” at the Smithsonian Museum. Though she remains unfamiliar with the classic film, Chandler seems to fit the tone of its title song, “Somewhere over the Rainbow.”

In 2015, Chandler went to India as a Goals for Girls ambassador. She ventured into the heart of India in Nagpur before spending a week in a very crowded New Delhi.

Last week, Chandler embarked on another journey–St. Andrews, Scotland. She will play with the university’s soccer team while taking a one-year Master’s program in Sustainable Development. Heather O’Reilly, a Tar Heel assistant coach who led UNC to two national championships before a 16-year professional career, connected Chandler with the program.

Chandler walked on to UNC’s program, where they won two ACC Championships and three regional titles. In 2019, they reached the national championship game, losing to Stanford 5-4 in penalties at Avaya Stadium in San Diego. The team not only practiced and played together, but often read books together.

They ranged from “Man’s Search for Meaning” by Viktor Frankl, chronicling his imprisonment in Nazi concentration camps during World War II to “When No One was Watching” by Carli Lloyd, a member of the United States’ 2015 World Cup championship team.

A Public Health major, Chandler envisions a career in environmental sustainability. Last month, when Orange County received a Code Orange ozone alert from the wildfires along the west coast, it left Chandler concerned. But not surprised.

“It sound hokey, but I want to leave the world in a better place than I found it,” Chandler said. “I want to help save the world from climate change. In the past year, there have been lots of natural disasters with wildfires in Australia and California. We’ve had the most extreme weather in various part of the world. It’s real and it’s happening. I get some backlash for that. I think it’s natural to make it less important than it actually is because you don’t want to think about it.”