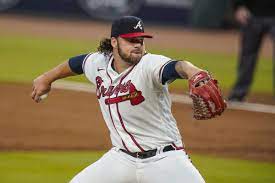 Bryse Wilson started the next chapter of his Major League career with the very team he defeated in his first big league outing.

On Monday night, Wilson made his Pittsburgh Pirates debut only three days after being traded by the Atlanta Braves. Pitching in American Family Field, the Milwaukee Brewers defeated Pittsburgh 6-2. Despite surrendering only one run, Wilson suffered the loss.

Wilson conceded only two hits and two walks over five innings. He retired the Brewers in order in the first frame. Wilson walked Eduardo Escobar to leadoff the second inning, but set down Avisail Garcia, Rowdy Tellez and Tyrone Taylor to retire the side.

Milwaukee’s only run off Wilson came in the third inning when Lorenzo Cain scored off a sacrifice fly by Kolten Wong. Cain reached on an infield single to third to leadoff the inning, then stole second. Milwaukee pitcher Eric Lauer moved Cain over to third on a bunt single.

In the fourth, Wilson walked Escobar, but Garcia grounded into a double play. Wilson set the Brewers down in order in the fifth to end his stint.

“Team obviously wants you, so you want to come out and make a good first impression,” Wilson said afterwards. “There were a little bit of butterflies there. End of the day I wanted to come out and throw the way I can. Will now get some consistency.”

On Friday, Wilson and Ricky DeVito were sent to Pittsburgh in exchange for first baseman Richard Rodriguez.

Shortly after the trade, the Pirates activated Wilson.

“I thought the fastball played better,” said Pittsburgh manager Derek Shelton. “Sometimes you see it on video & you don’t know what the action is going to be. Watching it from the side & talking to Stallings. The two-seamer really played & was very effective. Definitely a positive impression.”

The trade ended Wilson’s five-year stint with Atlanta that started when he was selected in fourth round of the 2016 Major League Baseball Draft, 109th overall, and received a $1.2 million signing bonus just days after graduating from Orange High School.

Only a month ago, Wilson was named the Triple-A East Pitcher of the Week with the Gwinnett Stripers. Against Durham on June 30, Wilson had a seven-inning scoreless stint, where he gave up just three hits and one walk with seven strikeouts in a no decision.

In his final appearance with the Braves, Wilson threw the opening game of a doubleheader against the New York Mets at Citi Field. Over three shutout innings, he held New York to four hits. He walked one and struck out two.

In 2018, Wilson had a dramatic rise through the Braves system, where he went from the Florida Fire Frogs of the Florida State League all the way up to Atlanta in a span of four months. In 23 minor league games with Florida, the Mississippi Braves of the Southern League and the Gwinnett Stripers of the International League, Wilson went 8-5 with a 3.23 ERA.

He made his Major League debut against Pittsburgh at PNC Field on August 20, 2018. Wilson threw five innings and earned the win in a 1-0 Braves victory. At 20 years old, he became the youngest pitcher in National League history to win his debut by that score.

Over the past two years, Wilson has been dominant with Gwinnett in Triple-A East only to have occasional starts with Atlanta. Last October was the zenith of his career when he defeated Clayton Kershaw in game 4 of the National League Championship Series. Wilson, technically still a rookie making just the eighth start of his Major League career, surrendered just one hit over six innings as Atlanta won 10-2 to take a 3-games-to-one lead in the best-of-seven series.

After Monday’s loss to Milwaukee, Pittsburgh is 40-66, 23.5 games behind Milwaukee for first place in the National League Central. The Brewers are currently the hottest team in baseball having won eight of its last ten.