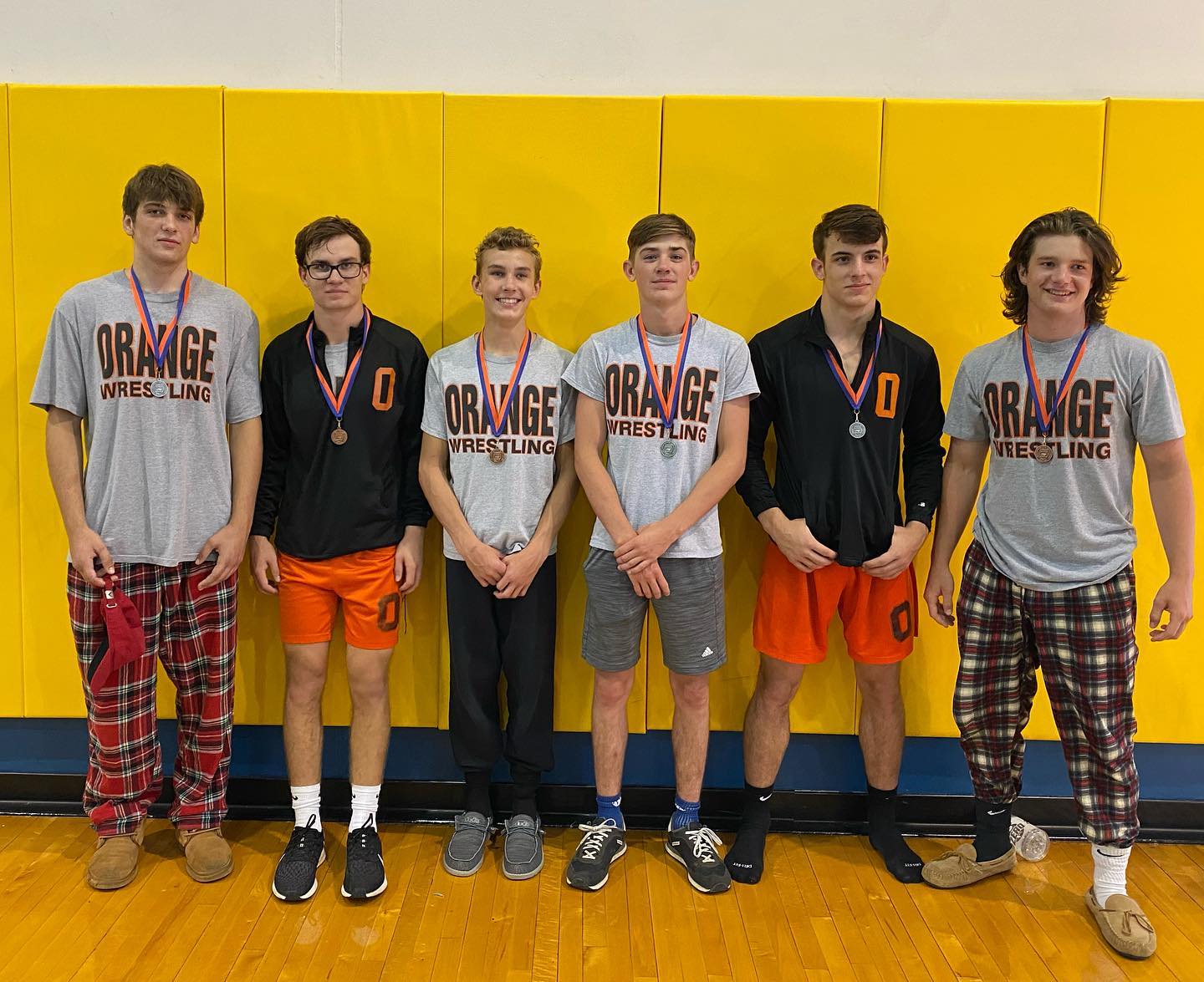 GIBSONVILLE–In every respect, Orange wrestling has rebounded from its most lackluster season in decades.

Last year, the Panthers finished 2nd in the Big 8 Conference, ending a string of 16 straight league titles. At the 2020 3A Mideast Regionals, they finished 4th in team standings and sent three wrestlers to the state championships.

A year later, Orange finds itself back atop the Big 8, they will send six wrestlers to the state championships and finished near the top of the 3A Mideast Regionals.

On Tuesday afternoon inside a humid Eastern Guilford High School Gymnasium, the Panthers finished 2nd in the regionals with 110 points. Union Pines capture the team championship with 147 points.

Additionally, Cedar Ridge senior Daina Pritchard reached the state championships for the first time in his career. Pritchard defeated Western Alamance’s Nolan Hogsed 7-3 to reach the semifinals in the 145-pound division. Pritchard, who has won 74 career matches, is 24-3 this season after a 4th place finish in the region.

Of the six Panthers who qualified for the state championships, three reached the regional finals in their respective weight classes. Senior Kessel Summers, who reached the state tournament for the third time in his career, held off Union Pines’ Andrew Clark 8-6 in the 138-pound semifinals. Summers advanced to the regional final for the first time in his career. Western Harnett’s Will Lewis won the regional championship with a pin in 1:40. Lewis, who will make his third state tournament appearance, won the 132-pound championship last year.

The other two finalists were also the offensive tackles for the Orange football team this past season.

Senior Hayden Horne, who had never started in an individual tournament before Tuesday, finished 2nd at 220 pounds. Horne pinned Northern Durham’s Tyler Kendall in 2:48 to advance to the semifinals. He pinned Westover’s Remington Workman in 1:18 to move on to the finals. Eastern Guilford’s Jacob Vickers pinned Horne in 1:24 for the regional championship, which ended Horne’s undefeated season. He is now 15-1.

At 182 pounds, Brendon Worsham qualified for the state championships for the second straight year. Worsham put away Gray’s Creek’s Gage Ratley 15-3 in the quarterfinals. In the semifinals, Northwood’s Cliff Davis had an early 4-1 lead on Worsham. In the second period, Worsham scored a quick trip takedown, landed on top of Davis and pinned him in 3:30. Union Pines Colin Pettine, who came in 3rd at 170 last year, defeated Worsham 12-7 in the final.

The other state qualifiers for Orange ran the gamut in terms of experience. Senior Matthew Smith-Breeden pinned Person’s Landon Lemaire in 42 seconds to earn a spot in the state tournament for the first time at 145 pounds. Later, Smith-Breeden pinned Pritchard in 3:27 to finish third in the region. Smith-Breeden is now 15-7 with seven pins this season.

Senior Henry Joubert-Stanzel finished 3rd at 170 pounds to clinch his first trip to the state championships. Joubert-Stanzel made quick work of Trinity’s Julian Goodman-Hernandez in 31 seconds in the quarterfinals. In the 3rd place match, Joubert-Stanzel defeated Eastern Alamance’s Julian Rodriguez’s 10-0, improving his record to 17-2.

Cedar Ridge senior James Rosati-Brown ended his career on Tuesday. Competing at 152 pounds, Rosati-Brown pinned Western Harnett’s Matthew Schneider in 39 seconds. In the quarterfinals, Cape Fear’s Dawson Travis defeated Rosati-Brown 9-4. In most years, there would have been a consolation round that could have led to Rosati-Brown reaching one of the top four spots. Because of the pandemic, this year it was a single-elimination tournament.

Rosati-Brown ends his career with a record of 77-48.

At 120 pounds, Cedar Ridge’s Fernando Martinez faced a tough draw. He opened with a pin of Gray’s Creek’s Cole Burgess in 3:29. Southern Durham’s ShyHeem Davis defeated Martinez 12-4 in the quarterfinals. Earlier this year, Martinez defeated Davis via injury default during a dual meet. Martinez ends the year 21-3. At the end of his sophomore year, Martinez has a career record of 55-16.

Cedar Ridge senior Kady Watkins, who has eleven victories this season, competed in the 126-pound tournament. Watkins will be in the Women’s Invitational Tournament at Glenn High School in Kernersville on Saturday.