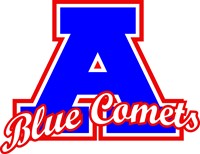 The highs of pulling off a postseason road win can be the highest imaginable.

A loss means the end.

And when the end comes off a dramatic play in the 7th inning, it feels very sudden and very cruel.

That’s why Tyler Lloyd, Jaren Sikes and Pierson Kenney met at the third base line for a group hug at McCrary Park on Tuesday night. They wanted one final moment together in uniform because they would never experience it again.

Not after Asheboro’s Tanner Marsh struck a 1-1 fastball off the top of the wall in centerfield, deep enough to score Camden Walker all the way from first base for the game-winning run as the Blue Comets defeated Orange 5-4 in the opening round of the 3A State Playoffs on Tuesday night. Asheboro (13-2) will travel to Greenville to face D.H. Conley for the 2nd round on Thursday.

Orange, who conclude the year 10-5, showed grit as they stormed back from a 4-0 deficit to tie the game. Pitcher Ryan Hench finished 2-for-4 with a double. Sikes, in his final game, went 2-for-2 with two RBIs.

“We came out a little nervous,” said Orange Coach Jason Knapp. “I could tell taking infield we were just a little tight. I think Ryan was a little nervous, but he settled in after those first few innings. He was great.”

Ultimately, Marsh was the biggest factor. In addition to getting the game-winning hit, Marsh replaced starter Caleb Walker to start the fifth inning. After some early hiccups, Marsh retired the final seven Panthers to earn the win.

Asheboro has won twelve in a row.

Trailing 4-0 in the fourth inning, Orange loaded the bases after senior Will Walker drew a leadoff walk, Hench doubled to left field and Conner Funk drew a walk. Marsh turned a double play that allowed Walker to score. Sikes hit a hard grounder into left field to bring in Kenney, who was running for Hench, to cut the Blue Comets’ lead in half.

Asheboro head coach Brett Hoogkamp made the daring move to put Marsh, a sophomore, on the mound. Right away, Orange loaded the bases again after Waitt hit a leadoff single, Walker walked and Hench singled to left field. Conner Funk lined a 3-1 fastball to right field to bring in Waitt. Sikes tied the game at 4-4 after he drew a bases-loaded walk.

“It’s always been a timely hit at the bottom of the order that has gotten us going,” Knapp said. “Today was no different. Those guys are aggressive at the plate and they came through for us. Particularly at the end of this year.”

It was also the last offense for Orange this year. After Caleb Walker ran up a short hill behind first base to catch a pop-up fouled off by Tyler Lloyd, Marsh retired Orange in order in the sixth and seventh.

Hench was close to the limit of 105 pitches coming into the 7th inning. Asheboro leadoff batter Alex Martinez drew a leadoff walk, but Camden Walker’s bunt, with two strikes, was fielded by Hench, who threw out Martinez at second. On Hench’s 105th pitch, Marsh sent the ball off the top of the wall and Walker raced around the bases and slid into home plate safely to start a raucous celebration as the Blue Comets continued its season.

With two outs and the bases empty in the bottom of the first inning, Gage Miller lined a single in front of Sikes in centerfield, which delighted the Asheboro fans sitting in the gold seats under a packed grandstand. Walker lined a double off the top of the left field wall that advanced Miler to third. With Connor Adams running for Walker, catcher Avery Jones tore a liner into right field to bring in the opening two runs.

Asheboro sophomore Josh Meadows sent a laser down the 3rd base line to open the second inning. Meadows went to third after a groundout by Camden Walker. Tanner Marsh sent a flair to centerfield to score Meadows and increase the Blue Comet lead to 3-0. Centerfielder Tatum Marsh, Tanner’s older brother, drilled a ball over Sikes’ head all the way to the 400-sign in dead centerfield. Tanner scored while Tatum was tagged out in a rundown.

“When you work so hard as a group, it hurts,” Knapp said. “It’s going to hurt unless you win the last one. That’s our goal every year when we go into the playoffs is to win the last one. Those guys put their heart and soul into it. As a coaching staff, we ask a lot out of our guys. And they give a lot. I love them to death. Our seniors did a great job leading the way. I told them I can’t believe it’s over.”