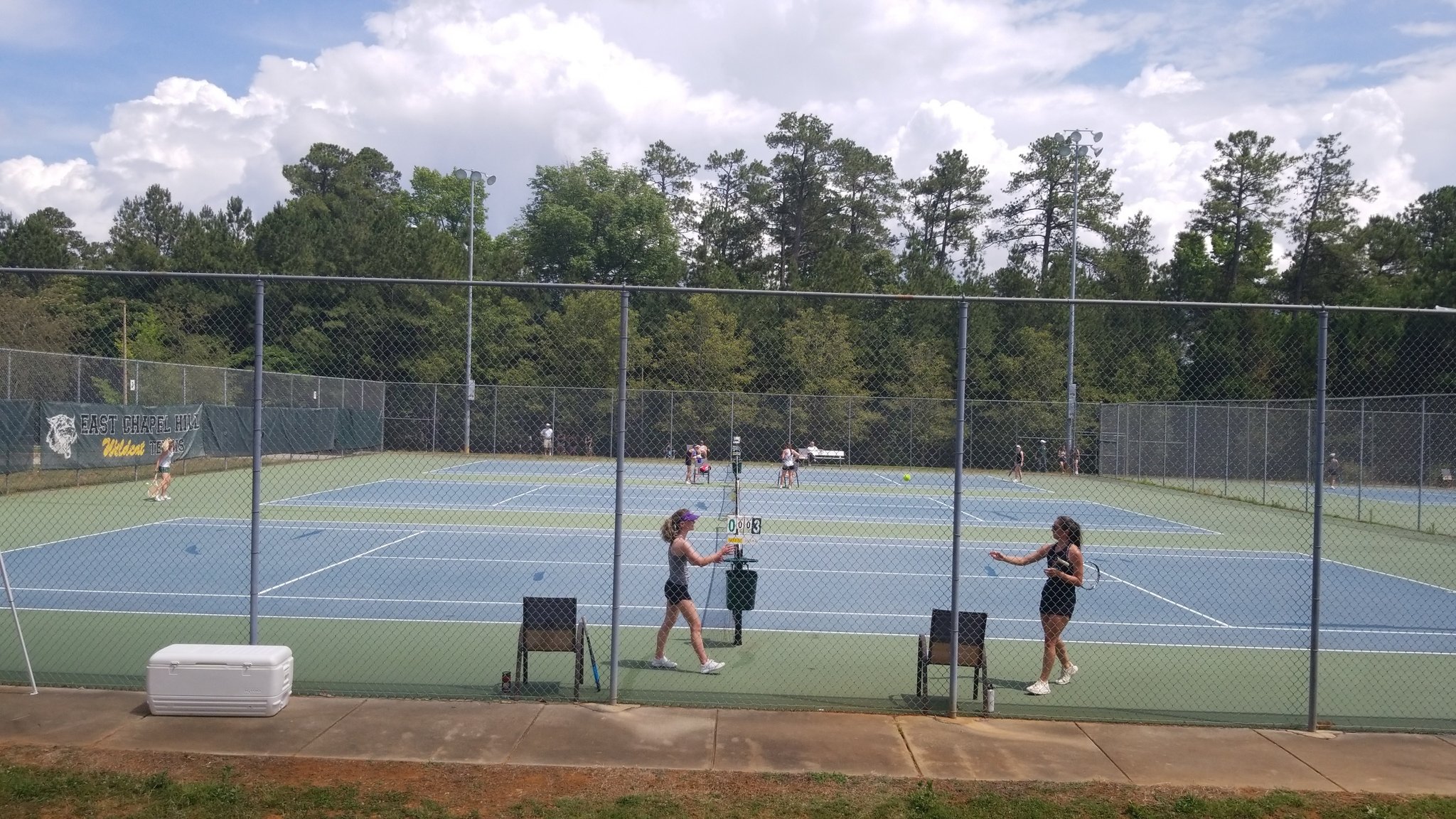 Arriving eight months later than usual, next weekend’s 3A Mideast Women’s Tennis Regionals will include a singles player from Cedar Ridge and a doubles team from Orange.

Cedar Ridge freshman Cameron Mayhew reached the semifinals of the Big 8 Conference Tournament inside Lindsay Linker Tennis Courts at East Chapel Hill High School on Wednesday afternoon. After receiving a bye into the second round Mayhew won her second round match 6-0, 6-0 to reach the semifinals. Mayhew fell in the semifinals to Northwood’s Evelyn Lippers 6-1, 6-3.

Mayhew is the younger sister of Cedar Ridge sophomore Josh Mayhew. Last month, Josh became the first Cedar Ridge singles player to ever reach the 3A State Men’s Tennis Championship match when he faced off against Chapel Hill’s Dennis Perumov.

A doubles team from Orange comprised of two freshmen reached the semifinals in the Big 8 Tournament. Finley White and Grace Pell advanced to the semifinals with a victory over a team from Northwood 6-4, 6-4.

The Mideast Regionals will be held at the Burlington Tennis Center starting Friday morning.

Over a two-day span, the Orange wrestling team faced the defending 4A State Dual Team Champions as well as the 2020 4A runners-up.

In a long road trip to Mecklenburg County on Tuesday night, 2020 State Champion Hough defeated Orange 46-24. In the same tri-meet, Mooresville Senior defeated the Panthers 37-27. It was the first dual losses of the season for Orange, who had won its opening 15 matches en route to the Big 8 Championship.

Orange senior Kessel Summers defeated Hough’s Tyler Caldwell in 55 seconds. In 2020, Caldwell qualified for the 4A state championships at 120 pounds, where he defeated Riverside’s Issac Ramirez in the consolation round. Summers later faced Davis Freeze of Mooresville, who finished 2nd in the state in the 2020 3A 113-pound tournament. Freeze handed Summers his first loss of the season on a 6-0 decision.

Orange 220-pound senior Hayden Horne maintained his undefeated record on the season with three wins. Against Hough, Horne defeated Anthony Walker in 1:02. Horne held off Mooresville’s Ray Watson. Against the Crusaders, Horne pinned Liam Roldan in 2:20. Horne, who was an All-Big 8 Conference offensive lineman for the Orange football team, is now 13-0 with five pins.

At 170 pounds, Orange senior Henry Joubert-Stanzel defeated Brady Rabb of Mooresville 10-5. Against Hough, Joubert-Stanzel squeezed out a 10-8 decision over Alex Coward. Joubert-Stanzel suffered his first loss of 2021 to Cardinal Gibbons’s Savoy New, 10-4, on Wednesday and is now 15-1 on the year. He leads the team with seven pins.

On Tuesday, Cedar Ridge traveled to Kernersville to close its 2021 dual season. The Red Wolves lost to Ledford 51-30 and to the Glenn Bobcats 48-24.

Cedar Ridge senior Daina Pritchard improved to 22-1 on the season at 145-pounds with a pin over Ledford’s Caleb Brumett in 4:19. Pritchard also earned a forfeit win over Glenn.