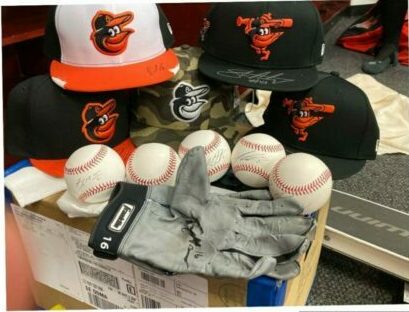 Regardless of whether you wear the burgundy, black and grey of Cedar Ridge or the orange and black of the Orange Panthers, there will be something for every baseball fan tonight.

Cedar Ridge will host Orange in baseball at Red Wolves Stadium tonight at 6 PM. In a benefit for Vs. Cancer, Cedar Ridge baseball coach Bryson Massey has worked exhaustingly to compile a lengthy list of items that will go to people holding a lucky raffle ticket.

Among the items that will be up for bid tonight will be signed baseball from several Baltimore Orioles, including Cedric Mullins, Freddy Galvis, Ryan Mountcastle, Shawn Armstrong and Darren Holmes.

Mullins is a native of Greensboro who has played with the Orioles since 2018. Just last month, Mullins had his first two home run game against the New York Yankees.

There will also be several game-worn items up for raffle. That includes cleats worn by current Cincinnati Reds pitcher Jeff Hoffman, who was the 9th overall selection in the 2014 Major League Baseball draft. Massey knew Hoffman from their days at East Carolina University, where Massey was a student manager for three years.

Also available for raffle will be a signed camouflage hat worn by Baltimore Orioles first baseman Trey Mancini, who knows about battling cancer firsthand. Mancini had a malignant tumor removed from his colon last year. In November, Mancini announced he was cancer-free and returned to the Orioles lineup this spring.

There will also be a signed, orange and black Baltimore Orioles hat from current Baltimore Orioles Matt Harvey and Paul Fry. Harvey is a former UNC standout who was an National League All-Star selection in 2014 with the New York Mets.

Cedar Ridge selected the UNC Lineberger Comprehensive Children’s Center to receive a portion of the funds for tonight’s game. Thanks to the generous support from of friends, family and fans, the team is well on its way to meeting its fundraising goal.

You can make a donation at this link.

Orange defeated Cedar Ridge 19-9 earlier this month. Last Friday, the Red Wolves defeated Northwood in Hillsborough. This will be the final meeting between the two teams, in any sport, this academic year.