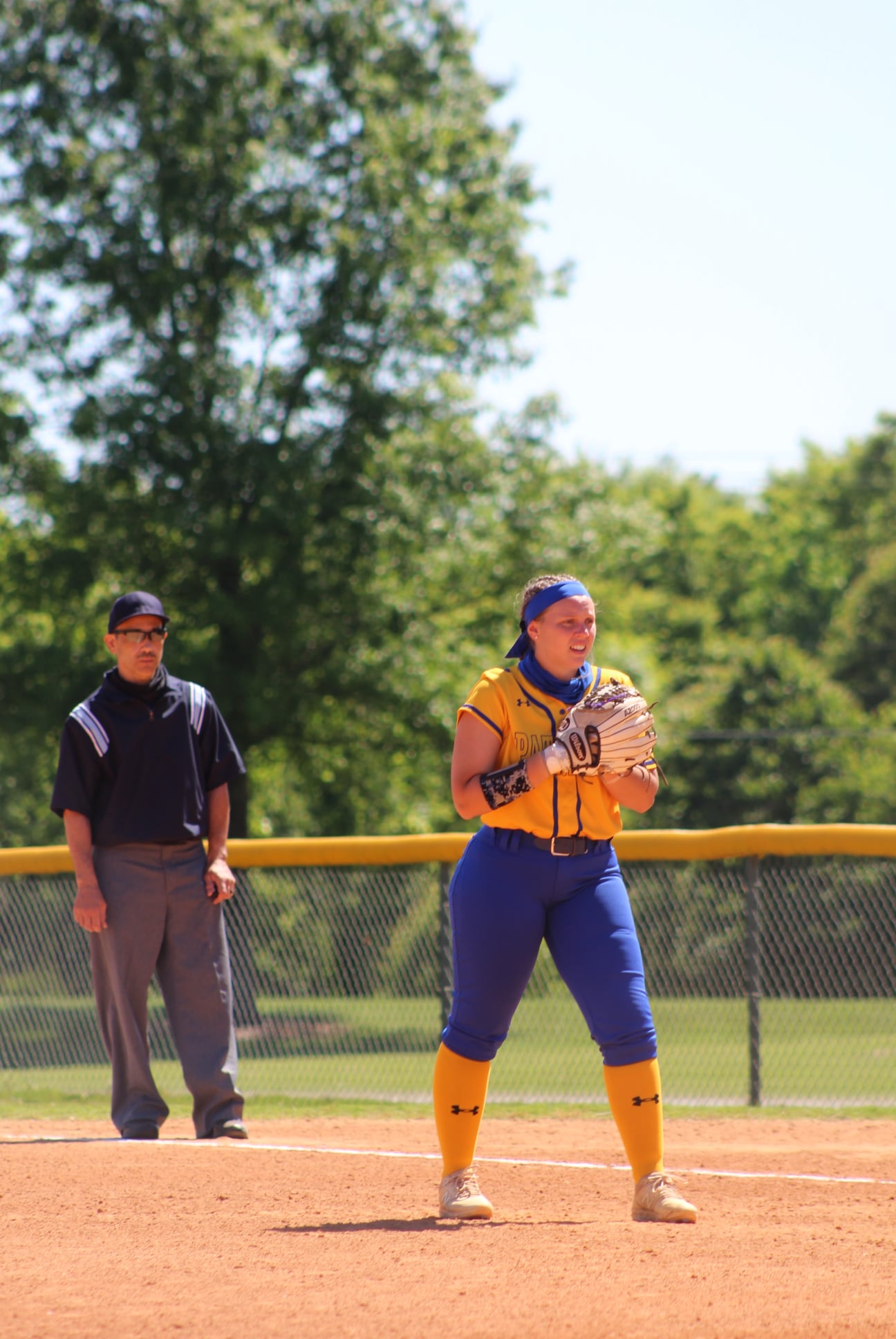 Jaden Hurdle: Hurdle was named to the Region 10 All-Tournament team for the Patrick Henry Community College softball team. The Region 10 Tournament was held at Springwood Park in Burlington on Friday and Saturday. Patrick Henry was eliminated on Friday. The Patriots captured the opening game as they edged Florence-Darlington Technical College. Hurdle completed a 5-run third inning for the Patriots with a three-run homer to right field, which put Patrick Henry in the lead for good. She finished 1-for-3. Later in the day, top-seeded Louisburg shut out Patrick Henry 5-0. Hurdle threw five innings agains the Hurricanes and struck out seven. Louisburg would go on to win the tournament championship. Florence-Darlington would eliminate Patrick Henry 2-1 to end the day on Friday. Hurdle completed her freshman season with a .328 batting average. She was tied for the team lead with ten home runs and ten doubles. Hurdle also had 31 RBIs, which was third on the squad. In 17 pitching appearances, Hurdle was 4-3 with a 4.51 ERA. Patrick Henry finished 22-20, 13-7 in Region 10.

Tori Dalehite: The UNC Greensboro softball team captured the Southern Conference Championship with a 9-4 victory over Western Carolina at UNCG Softball Stadium on Sunday. On Thursday, the Spartans advanced to the semifinals as they subdued Mercer 3-2. Dalehite entered the game as a pinch runner in the 1st inning after designated player Kayleigh Wilis walked. On Sunday night, UNCG learned they would face #13 national seed Duke in the opening round of the Athens Regional on Friday at noon. The irony is that Tori, her father Danny and her younger brother Landon are all Duke fans. As for her mother Beth, rooting against Duke is second nature.

Mia Davidson: On the strength of winning eight consecutive Southeastern Conference games down the stretch of the season, Mississippi State earned a trip to the NCAA Softball Tournament on Sunday night. The Bulldogs will travel to Stillwater, Oklahoma regional to face Boston University on Friday afternoon. Mississippi State is the #2 seed. Oklahoma State, the host and #5 national seed, will face Campbell in the opening round. On Thursday, #4 Florida eliminated Mississippi State 6-2 in the SEC Tournament quarterfinals in Tuscaloosa, AL. Davidson went 0-for-1 with two walks. She scored off a home run from Jackie McKenna in the 2nd inning.

Montana Davidson: Montana started at third base against Florida. She finished 0-for-2. Mississippi State goes into the NCAA Tournament 33-23.

Bryse Wilson: Upon his return to the Gwinnett Stripers of Triple-A East, Wilson had a no-decision in Sunday’s game against the Louisville Bats at Coolray Field. Wilson threw six innings and surrendered four runs off ten hits. He struck out three and walked none. Wilson had won seven consecutive starts for the Stripers, a franchise record.

Landon Riley: The Liberty Flames baseball team took two-out-of-three games against Kennesaw State over the weekend. On Saturday, the Flames won 12-11. Riley threw two-thirds-of-an-inning and surrendered five runs off three hits. He struck out one and walked two. It was Liberty’s eighth straight win, but the Owls snapped the streak after a 7-4 win on Sunday. Liberty finished as the Atlantic Sun Regular Season champion. Starting Friday, Liberty will host Bellarmine in a best-of-three series at Worthington Field. The winner of the series will face either Kennesaw State or Lipscomb in the Atlantic Sun Conference Championship in another three-game series in Jacksonville, FL starting May 27.

Jaylin Jones: The most successful season in Pfeiffer men’s lacrosse history came to an end on Saturday. In the opening round of the NCAA Division III Tournament, #4 Lynchburg defeated the Falcons 26-11 at Shellenberger Field. Jones, who was named to the All-USA South Conference first-team as a short-stick defensive midfielder, had two ground balls. Pfeiffer finished 12-2 after they reached the NCAA Division III Tournament for the first time in program history.