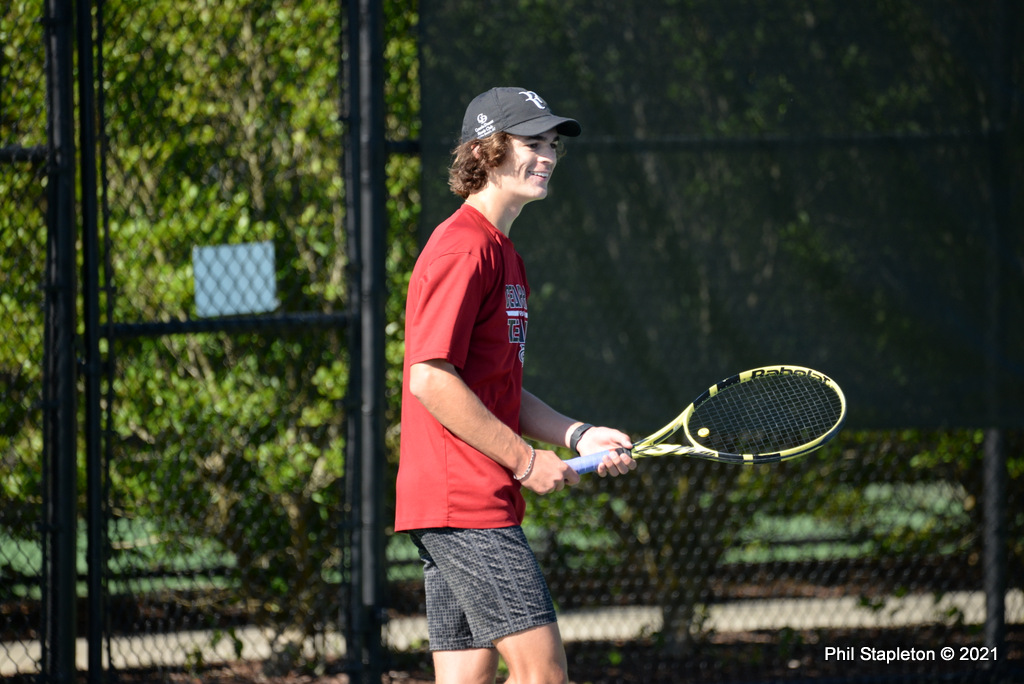 Only the second player from Hillsborough to ever play in a state final, and the first in 15 years.

Yet hours after he finished 2nd in the 3A State Tennis Tournament on Saturday at the Burlington Tennis Center, Josh Mayhew mainly discussed the future. When he’s told that no player from a higher classification in Hillsborough history has ever reached a state final, the sophomore flashes a smile, then talks about a summer’s worth of work ahead. It will hardly resemble the desolate months of 2020.

What do you learn at an event where you achieve something unprecedented within your own school and town, but fall short of the state championship? You learn from it. For starters, Mayhew discovered the difference between a runner-up and a state champion.

“I learned there’s some good competition out there,” Mayhew said at A.L. Stanback Middle School on Saturday, where he played in middle school. “It’s going to take a lot to be the best. I gotta work a lot harder. I need to learn to play better behind the baseline and hang in points longer.”

On Saturday, Mayhew defeated Soham Padran of Marvin Ridge 6-2, 6-4 to reach the championship match. In terms of United States Tennis Association rankings, it was an upset. According to the USTA Southern Regional Junior standings, Padran is 260 spots higher than Mayhew.

The only other men’s high school player in Hillsborough history to reach a state championship final was Orange’s Britton Webb in 2005. Cardinal Gibbons’ Will Rollinson defeated Webb 6-2, 2-6, 6-3. It was the first of Rollinson’s three consecutive 2A State Championships.

Outside of his four losses to Perumov, Mayhew went undefeated in his first full season at the varsity level.

Mayhew’s father, Steve, is the Cedar Ridge head coach who formerly played at Orange. Josh’s earliest memories of tennis go back to when he was five years old when he would play in the driveway with his father.

“I came up with ways to make it fun,” Steve said. “It was a good way for the family to have fun. Josh, Cameron (his younger sister who is currently Cedar Ridge’s #1 women’s player) and even Hannah would all play tennis together.”

At seven years old, Josh started playing USTA Tournaments competitively with a red compression balls (which don’t bounce as high as regular balls) on a 36-foot court. By ten, he advanced to a 60-foot court with orange compression balls. Once he got to 12 years old, he played tournament on standards courts with standard gear.

“He aged up,” Steve said. “He has tons of experience. He’s played so much tennis at such a young age. He’s had tons of reps.”

Aside from his father, Mayhew has had help with coach Chris Cloer, a native of Brevard who went on to become an All-American at Florida State. Cloer is now a volunteer assistant with UNC.

“When Chris was an assistant coach at N.C. State, Josh worked with him.” Steve said. “Then when Chris went to UNC, we worked with him in Chapel Hill. He works to make Josh’s swing as efficient as possible.”

Mayhew’s current coach is someone called “Z,” a nickname he’s grown so attached to, neither he nor his father can remember his formal name.

Training can’t prevent cramping, which Mayhew experienced in his second round match against Ben Jones of Clayton on Friday. Late in the second set, Mayhew needed time to recover. He prevailed 7-5, 7-5 to reach the semifinals.

“I had to take a medical timeout,” Mayhew said. “I got ice and stretched. I was good again.”

Now a month away from finishing his sophomore year, Mayhew’s ultimate goal is clear. And obvious.

“I feel like I’ve accomplished something,” Mayhew said. “But I want to accomplish more. I want to be the best in the state next year.”