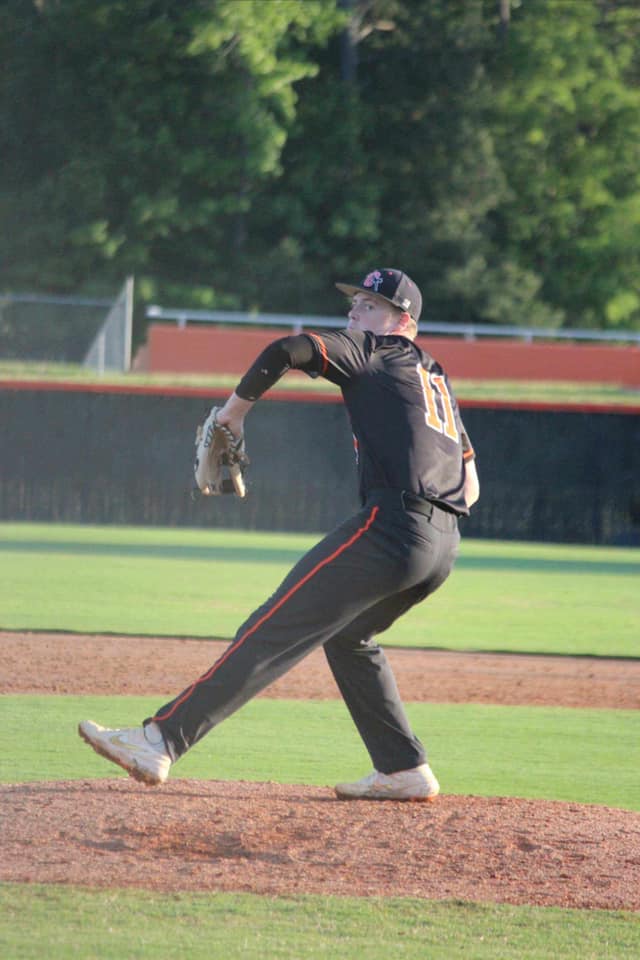 There was no gas shortage at Tiger Field on Tuesday night.

In only his second varsity start, the sophomore pitcher struck out 14 batters in a two-hit shutout to propel Orange past Chapel Hill 5-0. Hench did it on the same night where former Orange star Bryse Wilson started for the Atlanta Braves against Toronto at Truist Field.

According to MaxPreps, Wilson’s career-high at Orange was 15 strikeouts against East Chapel Hill on March 21, 2016.

Through nine innings over his past two starts, Hench has surrendered two hits, one walk and no runs with 18 strikeouts.

The Panthers, 5-0, ensured a playoff birth for the 19th consecutive season.

Hench started Orange’s victory over Northwood on Friday, where he and three other pitchers combined on a one-hitter. It was his first varsity win in just his second pitching appearance. Against the Chargers, he was pulled after three innings and 51 pitches without conceding a hit. On Tuesday, he needed only 90 pitches to blank Chapel Hill, 71 of which were strikes.

Hench’s brother Cooper, who graduated from Orange last June and recently completed his freshman year at N.C. State, was in attendance Tuesday. In Orange’s last trip to Chapel Hill on April 25, 2019, Cooper Hench threw a three-hit shutout in a 10-1 Panther win.

“Absolutely,” Knapp immediately answered when asked if he felt Hench was capable of such a powerful performance. “I thought he could give us a good 4-5 innings after what we saw against Northwood. He was fired up tonight. He commanded the zone and wasn’t scared to pitch to contact.”

Hench’s emotional, confident nature was on full display right down to the final pitch. With an 0-2 count on pinch hitter Liam Carruthers with two out in the 7th inning, Hench slammed the rosin bag down on the back of the mound and forcefully turned to the plate, which got a rise out of an already boisterous Panther dugout. Hench unleashed yet another fastball that glanced off Carruthers bat in front of the plate. Orange catcher Davis Horton picked it up and threw to Jordan Underwood to end the game. Moments earlier, Underwood made the defensive gem of the night. With Tigers catcher Trevor Liebe at second following a double, Underwood made a diving stab on a grounder hit by Chapel Hill’s Becket Yates that hugged the first base line. Hench raced over to cover first as Underwood, still on the ground, chucked the ball across to preserve the shutout.

Chapel Hill only managed five baserunners. Liebe had both of the Tigers’ hits. Of Hench’s 14 strikeouts, Chapel Hill had two batters get on base after dropped third strikes. Four of the base runners were left on base, while the other was tagged out in a rundown.

Orange centerfielder Jaren Sikes scored the Panthers’ first two runs. Sikes led off the third inning with a beautiful bunt down the third base line. With Tyler Lloyd at bat, Sikes went station-to-station, going to second base on a wild pitch, and advanced to third when Lloyd flew out to right. With two out and Conner Funk at bat, Sikes scored off another wild pitch.

Chapel Hill’s biggest threat came in the bottom of the second. Liebe lined a one-out single to right field. Third baseman Tyler Stillson was hit by a pitch. Carruthers, running for Liebe, advanced to third with one out after a wild pitch with Martin Nesbitt at bat. Hench shut down the threat with strikeouts of Nesbitt and Will Blythe.

It appeared Sikes would leadoff the fifth with a routine flyout to left field. But fly balls were as problematic as finding a gas pump on Tuesday night, and the outfielder lost it in the lights. Sikes, despite nearly being thrown out, still wound up at second, then went to third on another wild pitch. Lloyd sent a grounder to Stillson, who tried to nab Sikes at the plate, but Sikes slid in safely. Lloyd advanced to second base on a sacrifice bunt by Jackson Berini. Will Walker got on board after an infield hit with two out, and Lloyd would score off a wild pitch with Horton batting to increase Orange’s lead to 3-0.

In the fifth, Berini added another run following a leadoff walk. Horton singled to left field to extend his hitting streak to four games. Hench, as if his night wasn’t big enough already, lined a single to centerfield to bring in Berini. Right fielder David Waitt grounded a fastball through the hole in left for a RBI single to score courtesy runner Jacob Jones, running for Horton.

After Orange scored 15, 19 and ten runs in its first three contested games (Vance County was a forfeit on April 30), the Panthers picked up a reputation across the league as an offensive powerhouse with questions surrounding a young pitching staff. In one night, that may have changed with Ryan Hench delivering a power pitching performance not seen since Wilson’s high school glory days five years ago.

Now, Orange will prepare for Northern Durham next Tuesday in Hillsborough. It will be Orange’s final game that will count in the Big 8 Conference standings this year and could decide the league title. (Northern was scheduled to play Northwood in Pittsboro on Tuesday, but didn’t travel due to the gas shortage. Northern’s wrestling team did travel to Hillsborough to face Cedar Ridge).

While the conference crown will have to wait, Knapp went to bed on Tuesday night knowing that his postseason fate is secure.

“It feels real good,” Knapp said. “To get that sewed up and to get into nonconference games, we’re just excited. These guys are getting better every single day.”