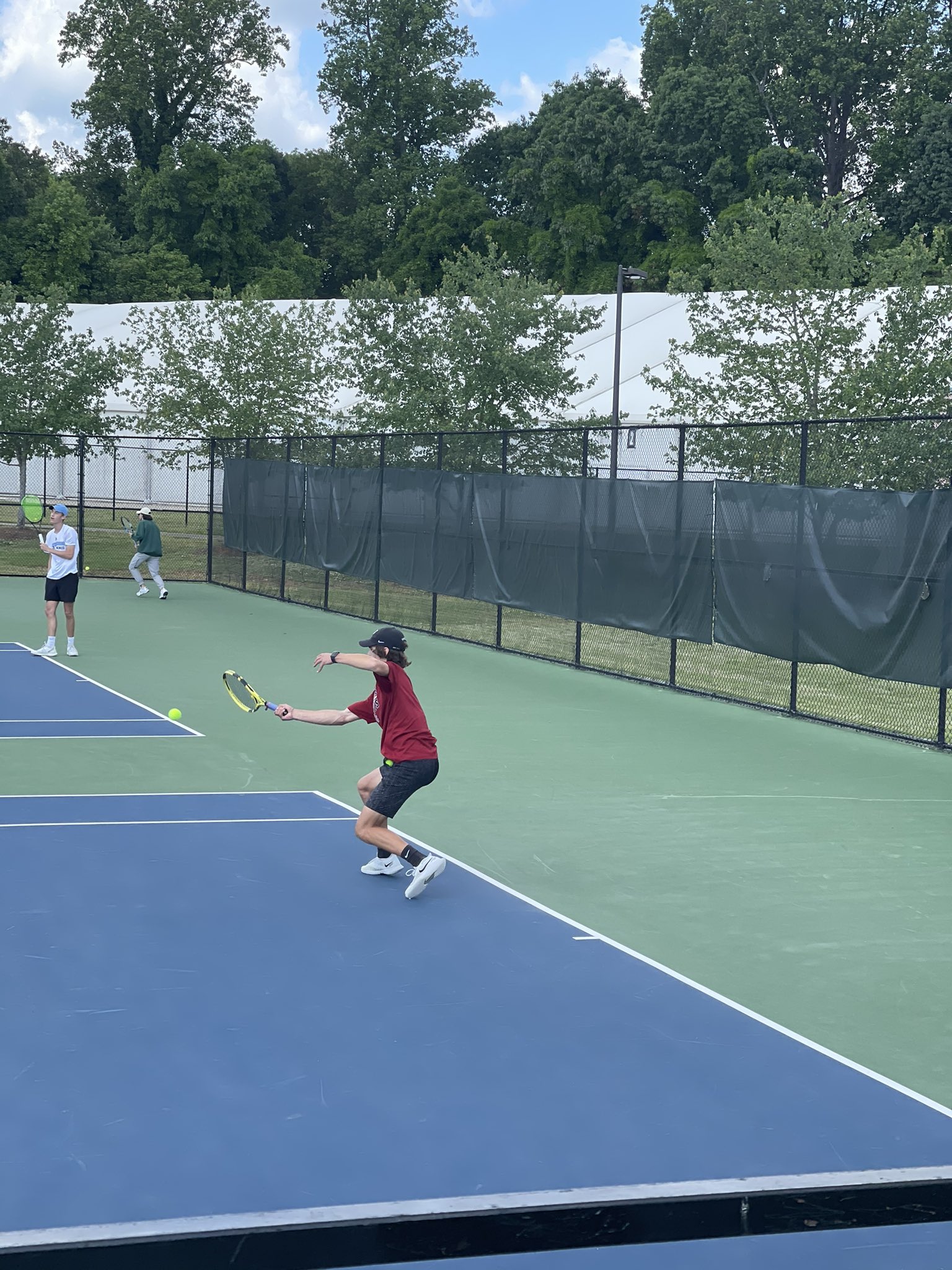 BURLINGTON–There had not been a Hillsborough representative in the NCHSAA 3A State Men’s Tennis Championships, singles or doubles tournaments, since 2014.

This year, there will be two.

For such a lofty accomplishments that took years for anyone to accomplish, Cedar Ridge sophomore Josh Mayhew didn’t exactly survive a thriller to clinch a spot in the 3A Mideast Regional Semifinals on Saturday afternoon at the Burlington Tennis Center. Mayhew cruised past East Chapel Hill’s Rama Varanasi 6-0, 6-0 in the second round. Earlier in the day, Mayhew defeated Western Alamance’s Will Geiger 6-0, 6-2 in the opening round.

The four semifinals in the regionals, scattered across four different tournaments in North Carolina, automatically qualify for the 3A State Championships.

Mayhew is the first Cedar Ridge singles player to qualify for the 3A State Singles Tournament since 2014, when Zac Marion faced George Lovitt of Marvin Ridge in the opening round. Lovitt won by default.

Mayhew has made up for lost time after the pandemic prematurely halted his freshman season. In addition to regular practices with his teammates, he often stays afterwards to practice his serve, often with softball and baseball games going on around him. His father, Steve, and sister, Cameron, occasionally play pickle ball at Cedar Ridge Tennis Courts after workouts.

While Mayhew has played offseason events in South Carolina and Georgia, the state tournament will offer a new challenge.

“I think it will be some good competition,” Mayhew said. “I can’t wait to play them.”

Mayhew will face Ferreria in the regional semifinals on Monday. The regional title match will also be held later that afternoon.

“I didn’t know what to expect at the beginning,” Gwinn said. “We turned out to have the upper hand in the end.”

O’Hagerty and Gwinn are the first representatives, singles or doubles, to reach the 3A State Tournament since Justin Webb became Orange’s coach in 2013.

“I thought Colin and Brandon were a better pairing and it worked out for us,” Webb said. “They went from not being a doubles pairing to being in states. So that’s pretty impressive. They came in very focused and towards the end of the season they started to play some of their best tennis.”

Gwinn and O’Hagerty have their contrasts. Gwinn shows up for matches with a pumpkin logo designed on the bottom his racket and will gladly show it off for anyone who requests it.

“Colin is definitely more of a serious player,” Webb said. “Brandon brings a little more laid back nature. They tend to offset each other.”

In the opening round, Gwinn and O’Hagerty defeated Isai Gutierrez and Francisco Urieta of Harnett Central 6-1, 6-0. On Monday, O’Hagerty and Gwinn will face Kabir Grewal and Michael Gannon of East Chapel Hill in the semifinals.

Orange junior Justin Conover defeated Western Alamance’s Zach Allred 2-6, 6-3, 6-3. It was one of two matches in the opening round to go three sets.

Terry Sanford’s Jordan Miller defeated Conover in the second round with a spot in the state championships on the line.

The Mideast Regionals was a final show of domination for the Big 8 Conference, which will disband next month. Of the eight qualifiers for the state championships, seven were from the Big 8.

The event was originally scheduled for Friday, but was rained out and postponed until Saturday morning.

The 3A State Championships are scheduled to start Friday at the Burlington Tennis Center.