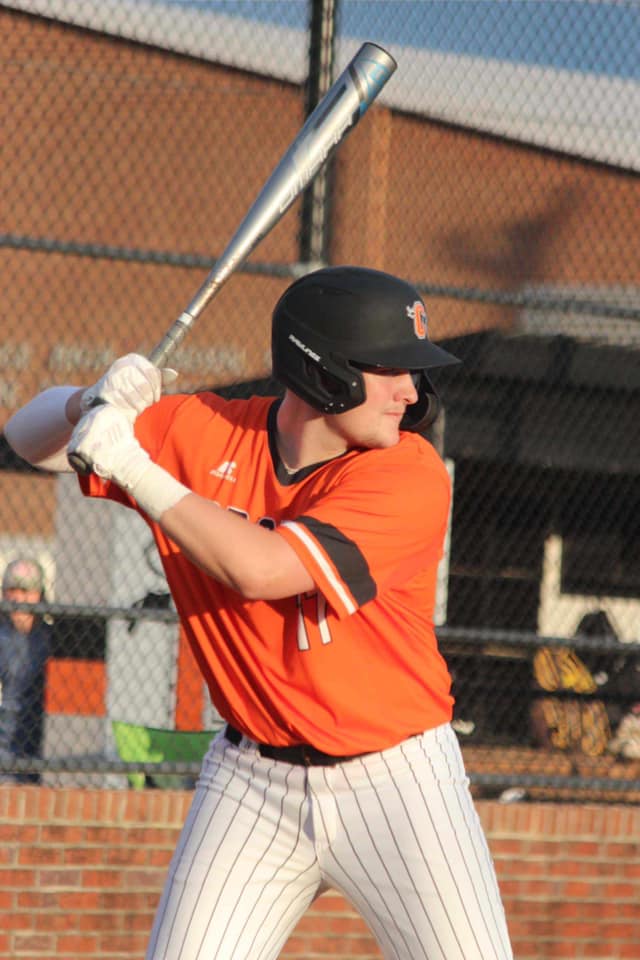 With this year’s Big 8 Conference baseball race a sprint instead of a marathon, Orange had a pitcher ready to learn on the job just in time for his first start.

In only his second pitching appearance for the Panthers, sophomore Ryan Hench didn’t surrender a hit over four innings to earn his first win as Orange rolled past Northwood 10-1 on Friday night at Panther Field. Hench, Jaren Sikes, Cesar Lozano and David Waitt combined on a one-hitter.

The Panthers (4-0, 4-0 in the Big 8 Conference) remain tied with Northern Durham for first place in the Big 8.

Orange scored at least ten runs for the third straight game (excluding the forfeit victory over Vance County last Friday). Northwood, coming off a dramatic win over Chapel Hill on Tuesday, started Salvador Delgado as pitcher for the second straight game. Orange’s first six batters had base hits, starting with Jackson Berini’s line drive to right field. Connor Funk lined a first-pitch fastball that rolled all the way to the fence, which allowed Berini to score from first.

It was the start of a five-run first inning. After Will Walker laced a single to left, catcher Davis Horton drilled a line drive down the left field line to bring in Funk. Horton finished 3-for-4 with 4 RBIs. Through three games, Horton leads the team with ten RBIs.

Hench helped his own cause when he legged out an infield single on a cue shot up the third base line. David Waitt poked a fly ball that floated down fair inches from the right field line to score Walker and led to Delgado being replaced by reliever Nick Lovingood.

Jordan Underwood got on board off an error to score courtesy runner Jacob Jones. Sikes hit a sacrifice fly to centerfield, which led to Hench coming in for the fifth run.

Berini, who finished 2-for-2, led off the second inning with a walk. After he stole second, Horton got his second RBI when he looped a single to right field that fell between three Chargers converging on the ball.

In the fourth, Berini lead off with a bouncing single over second base. Funk walked, which led to Horton lining a two-run double to the fence in left field.

Northwood didn’t get its first hit until the fifth inning, after Hench, left the game, when Seth Davis sent a soft line drive to centerfield. Davis took second off a wild pitch. Luke Smith and Lovingood walked, and Andrew Johnson brought in Davis with another free pass.

The Panthers responded with two more runs in the bottom of the fifth. Sikes led off with a double. Tyler Lloyd sent a hanging fly ball to second base, which was dropped and allowed Sikes to score. Walker knocked in Lloyd with a sacrifice fly.

Orange will travel to Chapel Hill on Tuesday, its first road game of the season. Panther coach Jason Knapp has also scheduled a nonconfernece game against West Stokes next Friday. The contest against the Wildcats will replace a scheduled contest against Southern Durham, which will be a forfeit win for Orange since the Spartans aren’t fielding a team this year.

For the second week in a row, Cedar Ridge nearly came back from a big deficit late.

Northern Durham led Cedar Ridge 10-4 going into the bottom of the sixth inning before the Red Wolves staged another big rally, only to fall short against the undefeated Knights 10-9.

Garrett Ray started the rally with an infield single. B.J. Thornton walked, and Nick Nolan doubled on a line drive. Ray was thrown out at the plate while Thornton advanced to third. Aiden McAllister doubled on a ground ball to centerfield to score Nolan and Thornton.

Marco Velazquez lined a double to centerfield to score Macias and Cothran, but Velasquez was thrown out at third for the second out. Thornton walked. but Norther secured a groundout to second base for the final out.

McAllister finished 2-for-4 with a double and a triple. Garrett Ray also went 2-for-4.

Cedar Ridge will travel to East Chapel Hill on Tuesday.