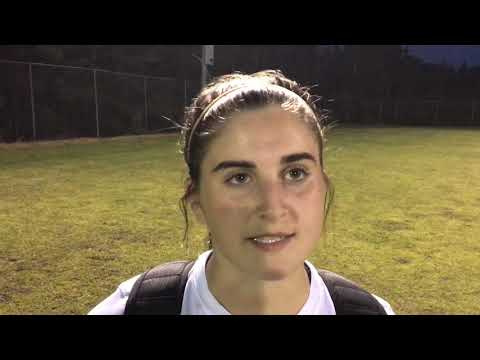 Women’s Soccer: The standard for goal scoring at Cedar Ridge for years, and possibly decades, to come will be 87 goals.

That’s what Cedar Ridge senior forward Emerson Talley ended her storied high school career with after the Red Wolves defeated Vance County 9-0 in Henderson on Monday. It was Talley’s 14th career hat trick and the fourth of the abbreviated 2021 season.

The Red Wolves ended the season 5-9 after Southern Durham forfeited the final game of the season, which was slated for Wednesday night. Talley, who vowed to former Cedar Ridge head coach P.J. Michaelson that she would score 100 goals in her career, likely would have exceeded that total in her junior season if it wasn’t for the pandemic.

As Talley’s career ended with a hat trick, a Red Wolf freshman had her first three-goal game. Rachel Alverson had a hat trick for Cedar Ridge, as well. In her final game, Cedar Ridge’s Nicol Anderson had a brace.

The Orange women’s soccer team concluded its most successful season since 2015 with a 4-1 victory over Northern Durham at James Armstrong Stadium on Wednesday night.

Brown ended the year as Orange’s leading scorer with 15 goals and four assists, as well as four hat tricks.

For the first time this century, the Orange wrestling team started as challengers to the Big 8 Conference title as opposed to the defending champions. Things started promising as the Panthers defeated East Chapel Hill 60-18 on Tuesday night inside Panther Gymnasium.

On Thursday, Orange rolled past Northern Durham 78-0 in Hillsborough. Only four matches were contested as the Panthers claimed the other nine bouts via forfeit.

On Thursday night, the Cedar Ridge wrestling team earned its first win of the young season with a 52-24 victory over Southern Durham. The Red Wolves got pins from Fernando Martinez at 120 pounds and veteran James Rosati-Brown at 152 pounds.

On Tuesday, Cedar Ridge participated in a tri-match against Northwood and Providence Grove. The Chargers edged the Red Wolves 40-36. Martinez scored a pin at 1:16 in his match. Pritchard, Rosati-Brown and Tatro all earned pinfall victories, as well. At 195 pounds, Wyatt Robinson pinned Northwood’s Jason Schroeder in 1:59.

Providence Grove defeated the Red Wolves 60-21. Martinez earned another pin over Logan Armfield in 1:18. Pritchard pinned Derrick Isley in 1:43. Rosati-Brown pinned Nathan Hutcherson in 3:03. Robinson grinded out a 5-2 decision over Gavin Hardister at 195.

Will Ballenger and Colby Alford ended their senior seasons successfully for the Cedar Ridge men’s tennis team on Wednesday afternoon. The Red Wolves rolled past Southern Durham to conclude the regular season 9-4. It was Cedar RIdge’s most successful dual season since 2017, when the Red Wolves finished 10-3.

In doubles, Ballenger and Alford teamed for a win at #1. Walker Richards-Baker and Jason Pattison won at #2 doubles. Woods and Filley completed the sweep at #3 doubles.

The Orange men’s tennis team completed its fourth straight winning season with a 6-0 victory at Southern Durham on Tuesday.