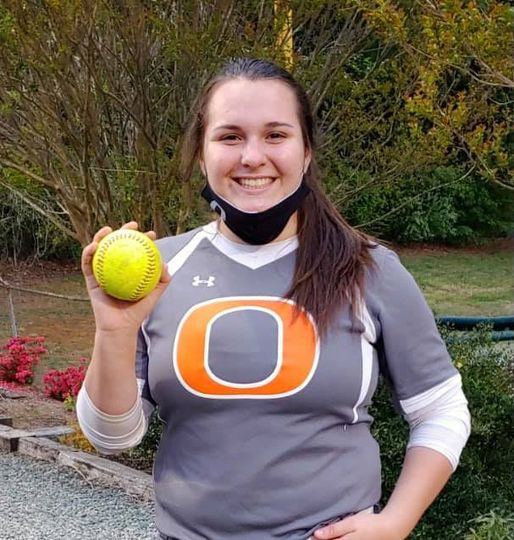 PITTSBORO–On a late April night where temperatures plunged into the low-50s in Chatham County, the Orange Lady Panthers bats were as chilly as the weather.

Clinging to a 3-2 lead after four innings, Orange scored ten runs in the top of the fifth to defeat Northwood 13-2 at Charger Softball Field. The Lady Panthers (10-0, 6-0), with the Big 8 Conference Championship already secured, are off to its best start since the 2017 3A State Championship season.

Junior catcher Lauren Jackson launched a 3-run homer to vault Orange ahead 8-2 and chase Northwood starting pitcher Caroline Garner from the game. Freshman Delaney Shaffer, who went 4-for-5 in the Lady Panthers’ win over Cedar Ridge last Friday, led off the fifth with a double down the left field line. She was the first of eight straight Lady Panthers to reach base safely in the 5th to break the game open.

Orange’s second turn through the batting order bore no resemblance to its first. Garner alternated her fastball with a changeup and an occasional knuckleball to hold the Lady Panthers to only two hits in the first two innings. Carson Bradsher, who singled for Orange’s first hit, scored the Lady Panthers’ only run in the first inning off a double steal after Mary Moss Wirt drew a throw to second base.

Bradsher, a sophomore who leads Orange in ten offensive categories, finished 4-for-4 with a triple and 3 RBIs. In her first full season at the varsity level, Bradsher is hitting .700 with 18 RBIs and eleven extra base hits.

“Lately, we’ve been playing at a level where we’ve been just getting by,” said Orange Coach Johnny Barefoot. “I kept telling them we need to wake up and get back to playing Panther softball. It took about the third inning. Then when Delaney Shaffer got that hit, it’s like the light came on and everybody got back in the groove.”

Orange pushed its lead to 2-0 in the third inning when Bradsher singled to left field to bring in Serenity McPherson, who reached on an one-out error in the previous at-bat.

Lady Panthers pitcher Gracie Walker, who improved to 4-0, needed only five pitches to cruise through the first inning. The rest of her night was much more strenuous.

In the third, Northwood catcher Called Perchinsky sent a cue shot down the first base line that was originally foul but rolled back fair to reach first safely. Walker issued walks to Carlee Harris and Erika Seils to load the bases, which led to third baseman Zoe Hatzidakis to record an RBI groundout on a ball hit to Bradsher. Courtesy runner Giselle Fallas scored to cut Orange’s lead in half. With Harris and Seils in scoring position, Walker struck out Abi McLaurin swinging to end the inning.

Northwood centerfielder Caroline Dorshimer led off the bottom of the fourth with a line drive to the left-centerfield gap for a double. After Sue Lee moved Dorshimer to third on a sacrifice bunt, Garner grounded out to Bradsher, which allowed Dorshmier to score. Jessica Watkins, representing the tying run, walked and stole second with two out, but Walker again got a strikeout to escape the inning.

After Shaffer’s leadoff double, McPherson walked. Bradsher legged out an infield single on a grounder to Lee, which scored Shaffer. Then Bradsher, who has mastered the art of getting into a rundown and still winding up safe, preceded to do exactly that. As Bradsher ran between first and second, Northwood’s third baseman threw the ball into left field, which allowed McPherson to come in. Bradsher wound up at third.

After Mary Moss Wirt was hit by a pitch, Jackson sent an 0-1 fastball deep over the wall in right field, landing just shy of the Northwood batting cage. In a span of five batters, Orange turned a close game into a 8-2 margin and they were just getting warmed up.

Harris replaced Garner as pitcher, but Kelsey Tackett drilled a single to left field. Gracie Walker lined a double to the right field warning track. Courtney Watkins, starting in place of Caden Robinson, reached on an error to plate Tackett. Watkins scored next off a sacrifice fly by Savannah Wynne, the ninth batter in the inning and the first one to be retired.

Shaffer and McPherson reached on consecutive singles, which led to Bradsher’s 2nd RBI single of the inning on a looper to right. Wirt drilled a first-pitch fastball to centerfield to bring in Bradsher and McPherson.

In all, Orange sent 14 batters to the plate in the 5th inning to score ten runs off nine hits, two errors, a walk and a hit by pitch.

Watkins threw a scoreless fifth inning, striking out two, to end the game. Of Orange’s ten wins, nine have ended via the run rule (10 run lead after five innings).

Orange has scheduled Southern Durham for a senior night game on Tuesday night, where seniors Emma Puckett and Gracie Colley will be honored before the first pitch. The Lady Panthers will play its only nonconference game at Southern Alamance on Wednesday before concluding the regular season at Northern Durham next Friday.