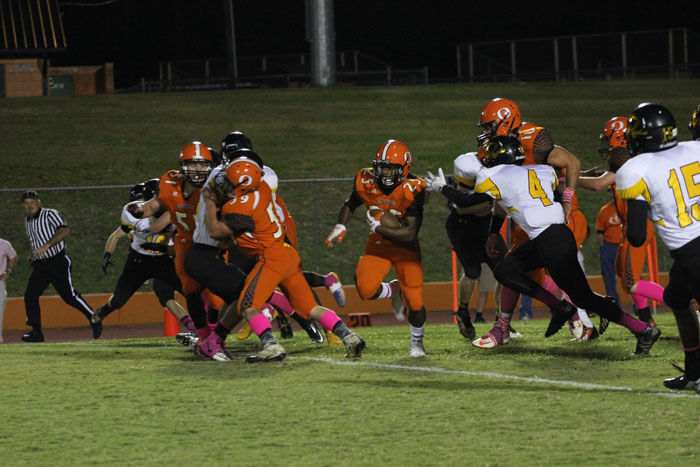 The biggest regular season football game at Chapel Hill High since 2008 isn’t supposed to happen in the middle of April. But the past year has been anything but normal.

Neither has Chapel Hill’s ascent to the top of the Big 8 Conference.

Less than two years ago, Chapel hill didn’t have a football team. The school that produced Bernardo Harris, who went to become a Super Bowl Champion with the Green Bay Packers in Super Bowl XXXI, Brett Farve’s only world championship. The same school that produced Matt Stevens, who went on to play on a Southern Conference Championship team at Appalachian State and ended his career on the first New England Patriots team to win a Super Bowl in 2002. If you don’t know Matt, perhaps you’ve heard of his teammate who became starting quarterback at midseason that year. His name is Tom Brady.

Chapel Hill Coach Isaac Marsh has had the ultimate emotional roller coaster since replaced Joe Wolfe as Chapel Hill head coach in 2004. Three months after he accepted the job his father, L.C., died. The day of the funeral, Chapel Hill upset Jordan and went to the 4A State Playoffs. There was a win at Middle Creek in 2007, the Tigers’ first playoff victory since the school was located on Franklin Street in the 1960s. The following August, 17-year-old defensive lineman Atlas Fraley died of natural cases after a scrimmage in Cary. The Tigers’ dedicated that season to his memory, playing inspired all the way to winning the PAC-6 Championship, ending their run as a 4A team with a dominant performance at Jordan in November 2008. The following week, Westover stunned the Tigers in Culton-Peerman Stadium in the opening round of the state playoffs, dashing the dreams of some Chapel Hill fans who thought they could make a run to nearby Kenan Stadium for all the marbles.

The next night, defensive lineman/fullback Rodney Torain was killed while riding home in the backseat of a car.

So, yes, Isaac Marsh has seen some things, some of which he would rather forget.

Certainly football can’t compare with the loss of human life. But as an exceptional student instructor since he arrived at Chapel Hill, Marsh lives to teach and coach. When he didn’t have a varsity team at all in 2019, a vital part of his life was taken away, at least on Fridays (Chapel Hill did field a JV team, which only fueled the rivalry with Orange).

That’s what made last Thursday night so surprising.

When a school hits the reset button on football, it’s like warming up a car on a snowy day. The heat isn’t supposed to come on right away. It takes time to get the engine warm again.

Yet after finishing 1-10 in 2019, Chapel Hill stunned Southern Durham 43-38 at Spartan Stadium to improve to 4-1. They were the first team to beat the Spartans this season.

Overnight, the entire shape of the Big 8 Conference race changed.

Coming into tonight, Southern Durham is in the clubhouse with a 5-1 Big 8 Conference record. Chapel Hill is 4-1, while Northwood is 3-1. The Chargers’ game against Vance County never took place last week, and Northwood officials are under the impression that it will be declared a forfeit victory in their favor. But that’s not official yet.

As far as tonight goes, Chapel Hill is playing for a share of the Big 8 Conference championship. It would be its first league title since the 2008 title.

Then there’s the added wrinkle of the Orange-Chapel Hill rivalry, which has been one-sided since Chapel Hill returned to 3A. Since 2009, Orange is 10-0 against the Tigers. They have been games like their last meeting in November 2019, when Orange had the talent advantage, they knew it, and they won 30-6. There was 2009, when Chapel Hill was going for a playoff spot, and Orange was struggling in the early days of Pat Moser. But the Panthers, coming off consecutive losses to Cardinal Gibbons and Southern Vance, stunned the Tigers 42-23 at Culton-Peerman Stadium to end the season, ruining Chapel Hill’s playoff chances.

Then there was 2015, possibly the greatest game ever between the two longtime rivals. The Tigers roared out to a 34-14 halftime lead behind quarterback Connor Stough. But Tay Jones and Bryse Wilson would not let Orange lose. After Jones caught a touchdown pass from Garrett Cloer in the fourth quarter, Wilson perfectly timed his jump on the subsequent onside kick and recovered it. The following play, Jones scored on a 46-yard touchdown run, then cashed in the two-point conversion to pave the way to a 38-37 Orange win.

As easy as it would have been, Marsh didn’t let that crushing loss destroy his team. They stunned defending 3-AA State Champion Southern Durham, in Spartans’ QB Kendall Hinton’s last high school game, during the 3rd round of the state playoffs. They went all the way to the Eastern Regional Championship game, where they fell to Northern Guilford in Greensboro.

Much like Chapel Hill dominated the rivalry in the 1990s, Orange has dominated it since 2009. Tonight will be their final meeting as conference rivals for the foreseeable future.

So it is spring. And some teams have had a live and let live mindset for this unusual season.

But for one April night, the Friday Night Lights will shine brightly at Culton-Peerman Stadium because the stakes can’t get much higher.