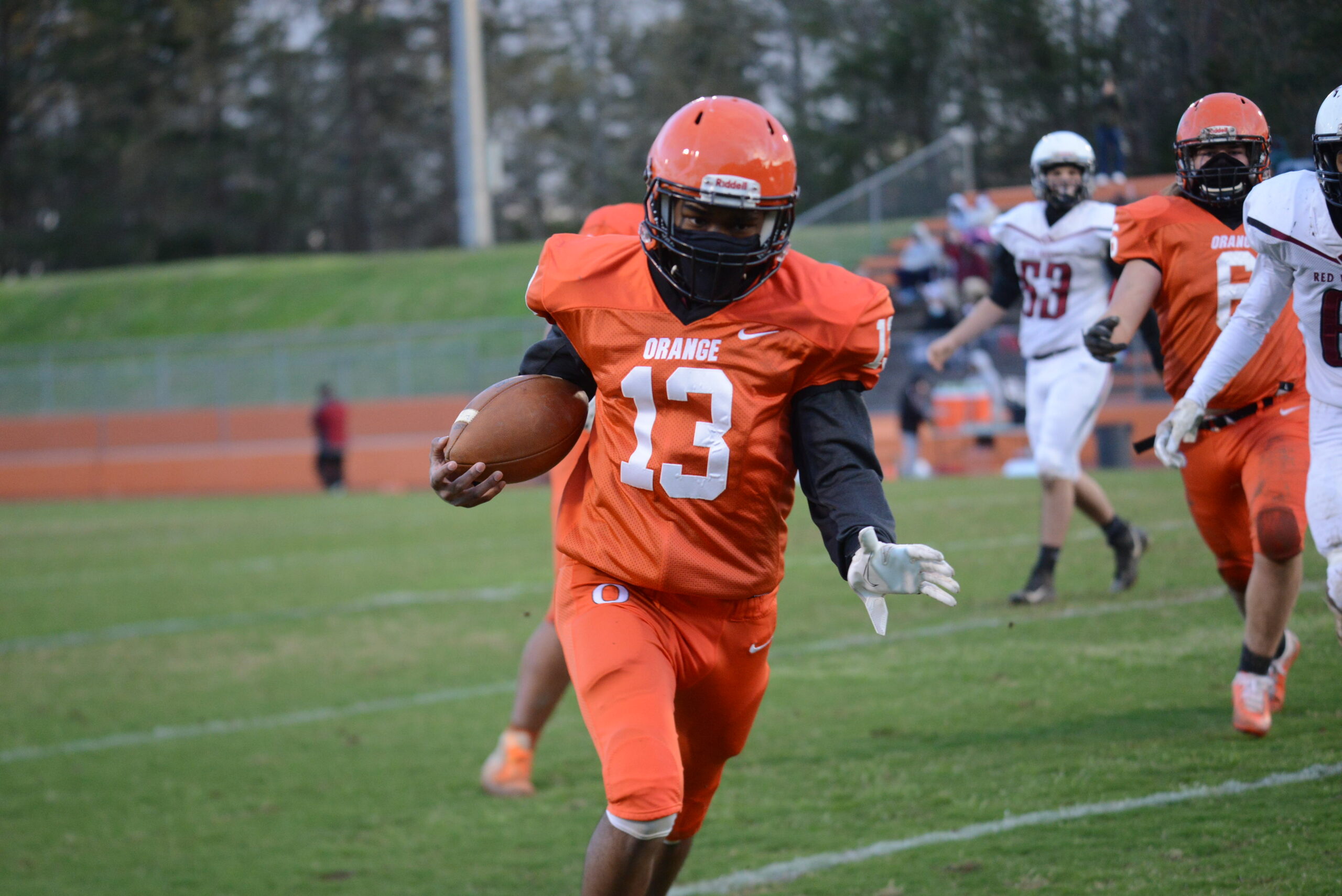 No intricate Xs and Os. No pep talks. No diagnosing hours of game tape.

Orange simply outmanned Cedar Ridge to retain the victory bell at Auman Stadium on Thursday night. One only need look at the Panthers’ rushing personnel, in addition to rushing yards, to understand why Orange continues to have the upper hand against its crosstown rivals on the gridiron.

In its fourth game under the double wing alignment installed by offensive coordinator Marty Scotten after a season-opening loss to Southern Durham, the Panthers had no less than 13 players receive carries against the Red Wolves. Cedar Ridge had two.

Naturally, five different Panthers scored touchdowns in Orange’s 36-6 win on Senior Night. The Panthers scored 21 points off turnovers and piled up 257 rushing yards to improve to 3-2. Senior wingback Elliott Woods, in his final game in Hillsborough, and freshman Nate Sorrells each had 58 yards rushing to pace an Orange attack that completed only one pass.

It was Cedar Ridge’s first trip to Auman Stadium since 2015.

“Coach Scotten said I was going to get the next run, so I’m glad the clock ran out,” said Orange Coach Van Smith. “For years, our model has been defense. We want to play really good defense and play good offense and establish ball control. Control the clock and control the pace of the game. That hasn’t changed since we’ve been here.”

Orange didn’t allow a first down until Cedar Ridge’s final drive of the first half. By that point, the Panthers were comfortably ahead 29-0.

The Panthers also had notable senior contributors who made big plays. Cornerback Daniel Champion suffered a separated shoulder in the first quarter against Southern Durham on March 5. Champion didn’t return to practice until this week, where he was allowed to practice only without contact.

He was cleared to play on Thursday night, though he was cautioned that he would endure some pain. Champion wound up making two interceptions, the first two of his career, both in the third quarter.

Champion’s first pick led to another senior night success story. On 4th-and-7 from the Cedar Ridge 13-yard line, backup quarterback Wynston Brown found tight end Will Crabtree, who hauled in the first varsity touchdown of his career. Crabtree, who was on the Homecoming Court during halftime, is a volunteer firefighter with the Cedar Grove Department and plans to become a fireman in Durham after graduating from Appalachian State.

Cedar Ridge, which lost its top ball carrier when running back Isaiah McCambry transferred to Walter Williams last fall, received its only touchdown from Aiden Seagroves on its final drive of the game.

Orange’s Elijah Danley made his team-leading third interception of the year on the second play from scrimmage. After Woods converted a 3rd-and-10 with an 11-yard carry, Jackson Wood scored his first varsity touchdown with 8:30 remaining in the first quarter.

Orange overcame three penalties on its next drive to score again. After Woods ran for nine yards on a 3rd-and-8, J.J. Torres crossed the goal line on a six-yard scamper.

After Woods recovered a fumble with 4:03 remaining in the first half, Brown replaced Jayce Hodges at quarterback. After Hecht started the drive with a 15-yard carry, Brown scored his first varsity touchdown on 4th-and-goal on a 5-yard keeper.

At the end of an eventful Thursday across the sports landscape, Orange season-ending matchup grew larger in magnitude. Chapel Hill upset Southern Durham, creating a three-way tie for first place in the Big 8 Conference. The Tigers, who didn’t field a football team two years ago, can clinch a share of the conference title with a victory over Orange next week.

It would be the first time since 2008 that Chapel Hill has won a share of a conference title in football.

Cedar Ridge is scheduled to have its senior night game next Friday against Vance County.